The Jimny and Fronx, along with the eVX Concept, are some of the most exciting unveils at Maruti’s pavilion. 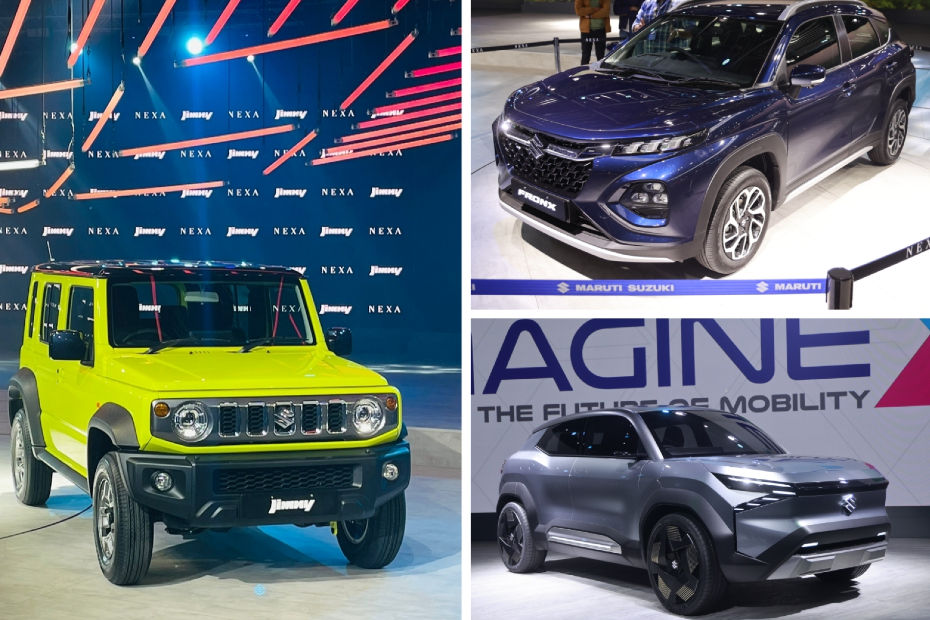 The series of unveilings at the 2023 Auto Expo commenced with the introduction of the Maruti eVX concept and day 2 featured the much-anticipated premiere of the Jimny and the new Baleno-based Fronx. Maruti also showed its current range with various cosmetic tweaks, while the CNG version of the Brezza has also been unveiled by the automaker.

Auto Expo 2023 kicked off with the global premiere of the eVX, an electric SUV concept. Maruti has stated that it would have a dual motor powertrain system for 4WD and promises a range of up to 550km. It may very well be the first iteration of Maruti’s first EV for India, slated to arrive in 2025.

The wait is finally over, as Maruti has unveiled the most anticipated Jimny at the Auto Expo 2023. Making its global debut in the five-door avatar with four-wheel-drive as standard, it aims to be more practical than its three-door self while still being a small and lightweight delight. The bookings have already begun via the Nexa chain, and Maruti could price it from Rs 10 lakh (ex-showroom) onwards.

The Fronx, a Baleno-based subcompact crossover, premiered at the 2023 Expo alongside the Jimny. It brings with it stunning design, elevating Maruti’s Nexa lineup even more into the premium space. The Fronx also marks the return of the 1.0-litre Boosterjet turbo petrol engine, which was first seen on the now discontinued Baleno RS. Bookings for the Fronx are currently being taken, with prices likely starting at Rs 8 lakh.

We also got to see the Brezza CNG, which will be the first CNG offering in the subcompact SUV segment. It will have the same engine as the Grand Vitara CNG and may cost roughly a lakh more than the regular petrol-manual models. Prices are likely to be announced soon.

Perhaps the most desirable of the showcases from Maruti’s existing lineup were the matte-finished avatars of the Brezza and Grand Vitara. Maruti has made no comments about bringing this exterior package to the market, but we hope they do, as Kia did with the Sonet and Seltos.

Maruti also showcased a prototype of its flex-fuel Wagon R at the 2023 Auto Show. It was unveiled earlier in 2022 in the presence of Nitin Gadkari, Union Minister of Road Transport and Highways. The prototype can run on E20-E85 ethanol-blended fuel.

Other Models With Different Paint Schemes and Visual Upgrades