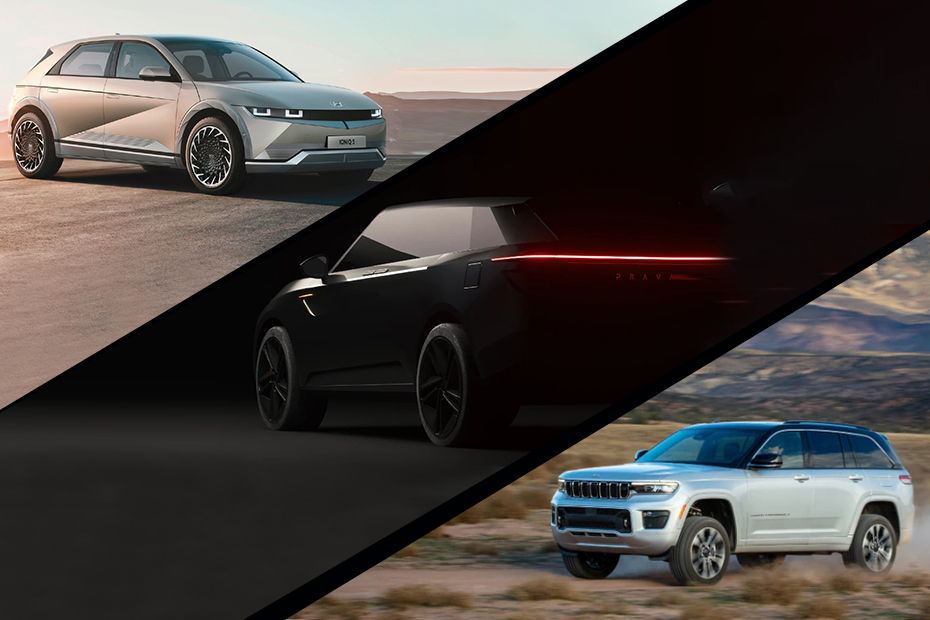 We all saw some new launches this festive season including the Grand Vitara and the Tiago EV. It's time to look at the next month, November. Carmakers like Hyundai, Toyota and Jeep are gearing up to launch their next offering this coming month. Here is a look at the top six cars you’ll get to see.

Hyundai’s second EV offering, the Ioniq 5, is expected to make its debut in November after it was again spied testing just last month. The India-spec version will look identical to the model sold overseas. Globally, it gets two battery packs: 58kWh and 72.6kWh with ranges of 384km and 481km, respectively. Inside, it will feature a 12.3-inch touchscreen infotainment display, a head-up display and Advanced Driver Assistance System (ADAS) functionalities.

Jeep has confirmed the launch of the fifth-generation Grand Cherokee in India this November. The luxury SUV will make its way into the country via the completely knocked down (CKD) route and will be priced competitively to its rivals. It will be powered by a 2-litre four-cylinder turbo-petrol engine mated to an eight-speed automatic transmission that will deliver power to all four wheels. Jeep also announced that the India-spec Grand Cherokee will get all ADAS features including lane keep assist, adaptive cruise control, front collision avoidance aid, and emergency braking.

Toyota’s next hybrid offering, the Innova Hycross, was recently spied testing. The soon-to-be-launched Hycross will get a 190PS+ (combined) 2-litre strong-hybrid petrol powertrain driving the front wheels. The Hycross will be the first Innova to be based on a monocoque platform. In terms of features, it should sport a larger touchscreen, LED lights and a 360-degree camera. It could also get a sunroof and ventilated seats.

MG’s facelifted Hector will likely launch in November as well. The carmaker shared a teaser in September which gave us a glance at its redesigned interior and the front fascia. It is expected to get the same engine and transmission options as the current model: a 1.5-litre turbo-petrol and a 2-litre turbo-diesel engine. The highlight feature of the Hector’s facelifted model will be the new 14-inch touchscreen display, largest in the segment! Its equipment list will also have a seven-inch driver’s display, electronic parking brake and ADAS functions. Ventilated seats, a panoramic sunroof and power adjustable driver seat will be carried over from the current model.

Maruti confirmed a while back that CNG variants of the recently launched Alto K10 will go on sale soon. It will get a 56.7PS 1-litre petrol engine (in CNG mode) with a five-speed manual transmission, the same setup found in the Celerio, which is rated at 35.6km/kg. The Alto K10 CNG should get the same feature list as the standard petrol engine The CNG variants are likely to be more expensive by close to a lakh compared to the petrol variants, which retail from Rs 3.99 lakh (ex-showroom).

Pravaig, a Bengaluru-based start-up, released a teaser for its upcoming electric SUV. The Pravaig SUV, to be unveiled on November 25, could feature a range of over 500km, a top speed of 200kmph and fast charging speed of just 30 minutes. Other teasers revealed a dual sunroof and sleek edge-spanning LED tail lights.

Force’s upcoming five-door Gurkha seems to be ready, as units have apparently started reaching dealerships. It will likely get the same powertrain setup as the three-door version, a 2.6-litre diesel engine paired with a five-speed manual four-wheel drivetrain. On the inside, the cabin is similar to the three-door Gurkha, including the manual AC, a touchscreen infotainment display, front power windows and the centre console layout. It will offer three rows of seating with multiple configurations. It looks identical to the three-door version save for the elongated looks and bigger 18-inch wheels. A launch or unveil could happen in November.