Facelifts, a micro SUV, CNG models, crossovers, and a 7-seater MPV! All are expected in 2023. 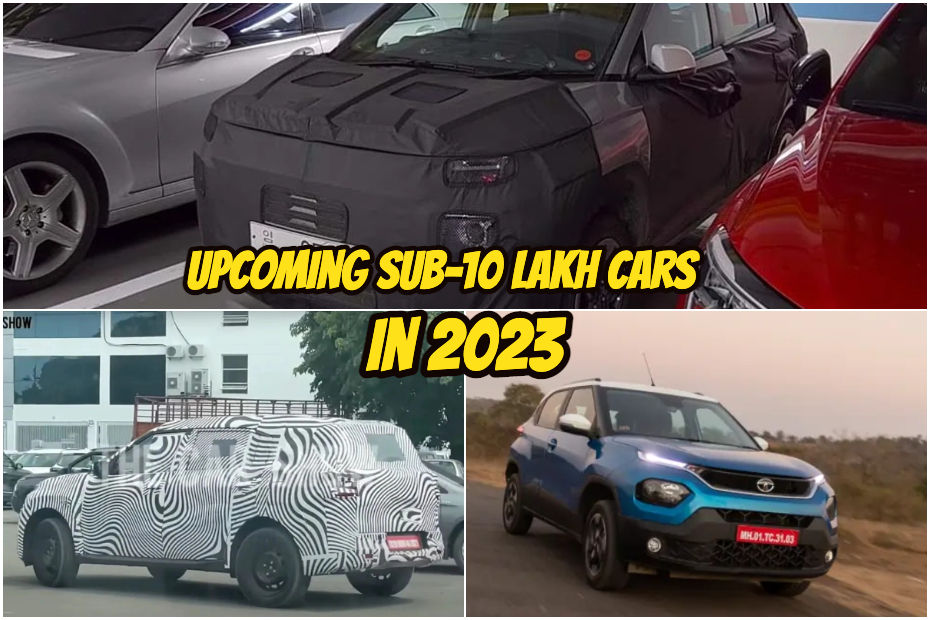 As the new year is approaching, we have to look at the cars that we’ll be seeing this year. We saw many-many exciting and important launches this year right from the new Alto to the Scorpio N. We’re expecting 2023 to be equally exciting and eventful.

Many people will definitely be interested to know which cars are incoming next year and here’s a list of the upcoming models that will cost under Rs 10 lakh:

Hyundai is bound to launch the facelifted Grand i10 Nios next year. The hatchback will receive a mid-cycle update which should give it cosmetic upgrades inside and out with new features. The facelift has already been spied testing in India with a tweaked front profile, new alloys, and redesigned LED tail lamps. It should continue with its 1.2-litre petrol and CNG and 1-litre turbo-petrol engines.

Just like its hatchback sibling, the Aura sedan will also undergo a facelift. Visual changes to the exterior and interior should be a part of the facelift, along with some feature additions. Even the Aura should be mechanically unchanged, continuing with its 1.2-litre petrol, CNG, and 1-litre turbo-petrol options.

While Hyundai snubbed the Casper micro SUV for India, we’re getting a different one. The India-centric micro SUV will be based on the Grand i10 Nios’ platform, rivaling the likes of Tata Punch and Citroen C3. It’ll adapt a hatchback-crossover appeal and will be a rugged alternative to the Nios. The powertrains and transmissions are expected to be carried over from the Nios itself.

Tata is expected to equip the Punch and Altroz with a factory-fitted CNG. The Altroz’s rivals Baleno and Glanza already get the green fuel alternative. We’re expecting both the models’ mid-spec variants to get the CNG option, with an efficiency of over 25km/kg.

Citroen might have two updates for the C3 this year. First, the introduction of an automatic gearbox. The C3 in Brazil gets a six-speed automatic gearbox, which could also be provided on the Indian version.

Citroen could also debut a three-row version of the C3 as test mules have already been spied in the country. The crossover will be stretched to accommodate two more seats in the back.

Not to forget that we’re also getting the C3’s electric avatar also early next year. The eC3 could offer a range of around 350 kilometres and be priced from around Rs 10 lakh.

Maruti’s working on a crossover based on the Baleno hatchback and we’ve already spied it many times. The Baleno cross would basically get body cladding, more muscular bumpers, and slightly better ground clearance. One thing interesting that we’re expecting is the 1-litre BoosterJet turbo-petrol engine, that made its stint on the Baleno RS.

Toyota’s version of the Baleno Cross

Just like the Baleno and Glanza, Toyota is also expected to bring its version of the Baleno Cross. The rugged appeal and styling would be present but in the Glanza’s avatar. It could be named Taisor, which was recently patented by Toyota in India. Under the hood, we’re expecting the same 1-litre turbo-petrol engine from the Baleno RS.