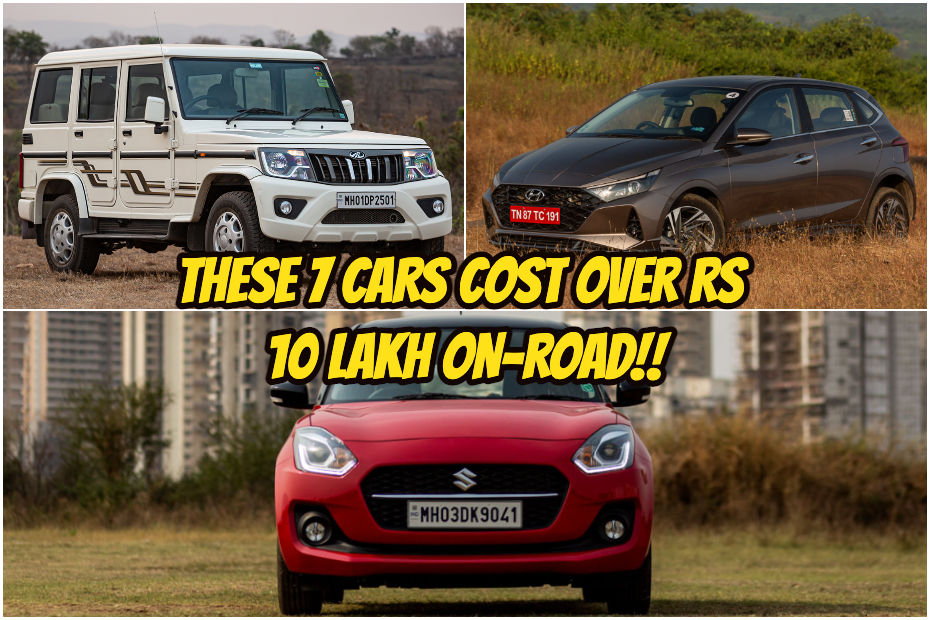 Most first-time car buyers tend to underestimate just how much they’ll have to pay on top of the well-advertised ex-showroom price in the form of State-wise road tax, registration fee, insurance and more.

As a result, the final quote or the ‘on-road price’ often comes as a surprise, often exceeding the buyer’s original budget. Add to that the stark rise in prices over the last few years and the result is that certain cars have become a lot pricier than most would expect.

So, here’s a list of seven cars that you might recollect costing under Rs 10 lakh not too long ago, which actually cross that barrier today:

Mahindra’s workhorse, it’s most simple and outdated SUV, costs up to Rs 12.5 lakh on-road. For this price, you have the choice of several better-equipped subcompact SUVs and even some compact SUVs. However, nothing is quite as rugged for the price as this Mahindra. The Bolero is powered by a 75PS 1.5-litre diesel engine that’s paired with a five-speed manual transmission.

The Maruti Swift is a premium compact hatchback and one of the best-selling cars in the country. It is also the costliest among its rivals here. For the price of a top-spec Swift with climate control, a touchscreen display and an AMT, you can actually look at several mid-spec variants of premium hatchbacks. The Swift gets a 90PS 1.2-litre petrol engine with manual and AMT options.

The Maruti Dzire, which was known as one of the most affordable subcompact sedans in India, no longer carries that title. Its Hyundai and Tata rivals and even their top-end CNG variants are comparatively more affordable and cost well under Rs 10 lakh on-road. The Maruti sedan shares its engine with the Swift, which is a 90PS 1.2-litre Dual Jet petrol engine with its CNG counterpart rated at 77PS. Transmission options include five-speed manual and AMT, the latter is only for petrol variants.

The Honda Jazz is now the oldest premium hatchback on sale, with the discontinuation of the VW Polo, but is still among the costliest. Only the base-spec V and VX manual variants can be had under Rs 10 lakh on-road. Its top-end diesel variant, when on sale, was also more affordable than the current top-end variants. The Jazz is offered with a 90PS 1.2-litre petrol engine with five-speed manual and CVT transmissions.

The Tiago EV is the freshest car on this list and currently the most affordable mass-market electric car on sale in India. Several States offer generous subsidies and rebates on EVs which could further aid in lowering the on-road prices of the car as the mid-variant’s on-road price goes over Rs 10 lakh at present. Tata offers the Tiago EV with 24kWh and 19.2kWh battery packs, claiming to deliver a range of 315km and 250km, respectively. You can charge the Tiago EV’s battery pack from 10 to 80 per cent in 57 minutes with a DC fast charger. This applies to both battery packs.

Tata’s micro-SUV, the Punch, is sized similarly to the likes of Maruti Ignis, Swift and Hyundai Grand i10 Nios. The Punch has hatchback proportions but carries a crossover styling. With these prices, it overlaps the mid-spec variants of the bigger Tata Nexon. The Punch is powered by an 86PS 1.2-litre petrol engine, paired with five-speed manual and AMT transmissions.

Most variants of the Hyundai i20 cross the Rs 10 lakh on-road mark, making it the costliest hatchback in its segment. There’s no automatic variant under Rs 10 lakh on-road and only the base-spec diesel variant costs less. It’s also the most versatile model in the list here, for it is offered with three engine options - 83PS 1.2-litre petrol with five-speed MT and IVT, a 120PS 1-litre turbo-petrol with six-speed iMT (clutchless manual) and seven-speed DCT, and a 100PS 1.5-litre diesel with six-speed MT.