Maruti Suzuki Dzire Price and Variants: The prices of the Dzire start at Rs 5.82 lakh and go up to Rs 9.52 lakh (ex-showroom Delhi). Maruti offers the Dzire in four variants: L, V, Z, and Z+ with both the engine options.

Maruti Suzuki Dzire Engine, Transmission and Mileage: Maruti’s sub-4m sedan comes with the choice of a 1.2-litre petrol engine and a 1.3-litre diesel engine. The petrol unit has a maximum output of 83PS of power and 113Nm of peak torque. The diesel is rated at 75PS of power and 190Nm of torque. Both engines come with a 5-speed manual gearbox as standard while a 5-speed AMT (automated-manual transmission) is offered as an option. Maruti claims a mileage of 21.21kmpl and 28.40kmpl for the petrol and diesel variants (for both manual and AMT) of the Dzire, respectively.

Almost a decade after it was introduced, India’s bestselling compact sedan, the Maruti Suzuki Dzire, is back in an all-new and grown-up avatar. It’s bigger, more spacious, loaded with features and even stylish too. But how good is this new third-gen Dzire in the wake of recent and competent rivals such as the Tata Tigor and Hyundai Xcent facelift? Will it continue to dominate people’s hearts and thereby sales charts? Let’s find out. 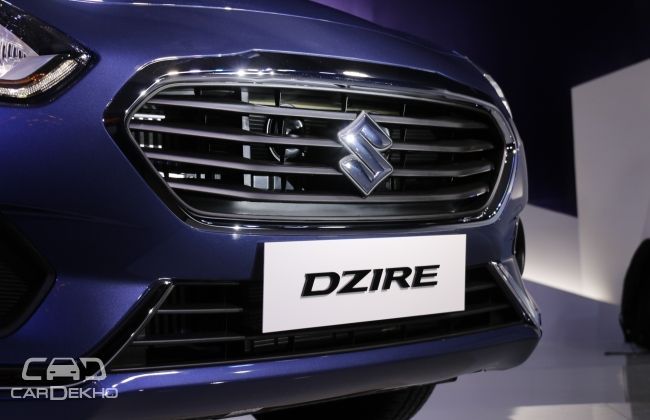 Though the new Dzire is more expensive than its rivals, the readiness of the platform to meet upcoming emission and crash compliance norms suffices its premium tag.

So, despite the price and the few wrinkles, Maruti Suzuki’s new Dzire has set the tone for the segment.

Despite its immense success, the older Dzire was never a looker. Much like most of its counterparts in the segment, it did come across as a hatchback that’s been stretched to look like a sedan. But with the new third-gen model, the Dzire has finally turned desirable - it’s fresh, contemporary and looks like a sedan from a segment above.

It’s also bigger in some ways - not in length but width which is up 40mm while wheelbase has increased by 20mm. The new Dzire sits lower with height reduced by 40mm and ground clearance reduced marginally from 170mm to 163mm. The changes have given the Dzire a more proportionate and sleeker stance. It’s not just purpose-built, it’s actually a handsome sedan which would’ve possibly looked even better had it not been for the length limitation.

At the front is a new pouty grille outlined by a thick layer of chrome. In some ways, it reminds us of the Fiat Punto Evo’s grille. Then there are those gorgeous LED projector headlamps with DRLs (daytime running lamps) - features usually seen in higher segments cars such as the Honda City but are now available in cars lower down like the Ignis. The thin, moustache-like chrome inserts under the fog lamps accentuate the front even further. Disappointingly, all these niceties including the new 15-inch “precision-cut” alloys are available only in the top-end variants. The lower V variant gets functional 14-inch steel wheels with cover.

The rear has been kept simple with a thin chrome strip running across the length of the boot merging with the taillamps that are now LED units. The boot also looks a lot better integrated and doesn’t feel slapped on forcefully to make it fall under sub 4-metre. There’s more space to carry your luggage with boot space increased by 62 litres to 378 litres. It’s still lesser than rivals Tata Tigor, Hyundai Xcent and Honda Amaze, all of which have over 400 litres of cargo space. However, it’s large enough to pack some big bags and camera equipment (check picture gallery for reference).

The desirable quotient carries on to the inside as well and you’d be surprised to see how much the Dzire’s cabin has evolved. The first things you’d notice are the dual-tone dashboard and steering wheel with chrome accents and faux wood inserts, which look surprisingly good (read NOT cheap). The flat-bottomed steering wheel is a first for this segment but what’s appreciable is that it’s available from the base L variant itself. In higher variants, the steering wheel gets even more focus, wrapped in faux leather. The buttons on the steering for controlling audio and telephony are soft to touch and feel upmarket though the same cannot be said of the switches on the door for power windows which are functional at best. The rich feel continues on to the gear lever which on the AMT is wrapped in premium feel leather and also gets a chrome surround that adds to the sophistication.

The dashboard is angled towards the driver for optimal ergonomics and viewing of the 7-inch Smartplay Infotainment System which now also supports Android Auto apart from Apple CarPlay. The sound quality of the 6-speaker system is impressive but sadly, you can have it only in the top-end variant. Lower variants get a regular audio system with USB, Aux, CD, and Bluetooth connectivity. However, this system looks very dated and feels out of place. This feeling is amplified when you consider the fact that more affordable alternatives like the Ford Aspire offer a touchscreen even in the mid-range variants.

The driver gets plenty of conveniences such as a seat-height adjuster, start-stop button, electrically retractable and adjustable outside rearview mirrors, and driver’s side auto up-down power window. The front seats are large and will be comfortable for larger people too. Maruti could have gone a step further and added a driver armrest as well, at least in the AMT variants.

The increased wheelbase and width have made their presence felt with improved cabin space and the biggest beneficiaries are the rear seat passengers. Kneeroom has gone up significantly for you to stretch your legs comfortably. Despite the lower height, headroom inside the cabin hasn’t been impacted drastically, at least not for those under 6 feet. Shoulder room has also opened up a bit, however, three adults on a road trip won’t make for comfortable company, although shorter trips within the city can be managed. That said, it is still the best sub-4 metre sedan when it comes to seating three at the rear, closely followed by the Ford Aspire. It also gets rear AC vents for added rear passenger comfort.

When not in use, the middle seat can be folded down into a centre armrest with cupholders. There are some more storage spaces at the rear - bottle holders on the door, a seatback pocket and a mobile holder next to the rear AC vent. And if any of your devices are running out of juice, there’s a thoughtfully added power socket as well.

Powering the new Dzire are the trusty, reliable 1.2-litre petrol and 1.3-litre diesel units that were in the older Dzire. The power and torque outputs are also left unchanged. What has changed, though, is the automatic transmission which Maruti is offering in the form of a 5-speed AMT (automated manual transmission) unit from the V variant onward as opposed to the top-end trim earlier. The new Dzire has also shed weight by 85-95kg depending on the engine.

We were highly impressed by the AMT in the Ignis and hence had high expectations from the Dzire’s setup too. Maruti says that it has tweaked the gearing and calibration of the AMT in the Dzire. Driving the Dzire diesel AMT in the city is a smooth affair and the creep function further adds to the convenience in stop and go conditions. But out on open roads, the ‘head-nodding’ that’s usually associated with AMT gearboxes (but was surprisingly absent in the Ignis) rears its annoying head when you upshift around the 2000rpm mark. Looking to overtake? You may need to plan your move in advance by slamming the accelerator or slowing down to downshift prior to making that pass. The easier option we feel is to just switch to manual mode but that would mean keeping your left arm occupied.

If highways are where you do most of your driving, then you should look at the diesel manual. The gearbox is responsive and shifts occur seamlessly and you barely feel any lag. Despite the weight loss, the diesel still feels heavier and you have to wait a bit for the car to gather pace. After that, it will happily cruise at 80-100kmph band without a fuss. Overall, the engine feels smooth, more refined and less noisy now, though some coarseness is still there. The 0-100kmph sprint takes 13.03seconds in this combination with the in-gear acceleration in 3rd (30-80kmph) and 4th (40-100kmph) clocking 11seconds and 14.72seconds, respectively.

But if you want a car that excels at both city and high driving, then it’s got to be the Dzire petrol AMT. The engine is refined and peppy, and the gearshifts are smoother and as per the driver’s requirements. The petrol-manual combination is also surprisingly peppy to drive with an impressive 0-100kmph time of 11.88seconds. The in-gear acceleration too is fairly quick with respect to the segment with 3rd (30-80kmph) and 4th (40-100kmph) taking 10.39seconds and 19.82seconds, respectively.

If there’s one thing about the Dzire that’s completely bowled us over, it’s the ride quality. The suspension is so silent, the ride so plush, and it may sound like a big statement but there’s possibly nothing that unsettles this sedan. We went over some really rough and broken roads but the Dzire’s suspension absorbed them all without any thuds or rattles, especially the AMT variants. There’s none of the bounciness in the rear that used to be felt in the older Dzire. Despite the ground clearance having gone down by 7mm, the Dzire went over speed bumps without grazing its underbody. If comfort is high on your priority, then the Dzire’s got your back.

On straight roads, and at speeds up to 100kmph, the Dzire feels stable, it’s 186/65 tyres offering a rock solid grip. But it doesn’t offer the same level of confidence in corners. The steering wheel weighs up adequately when driving at lower speeds. As you gather pace, though, it tends to lighten up a bit making you unsure about what the front wheels are doing. The brakes are responsive and get the job done but panic braking situations are best avoided.

One of the Dzire’s biggest plus points is that it’s now equipped with dual airbags and ABS right from the base L variant while managing to price it cheaper than the older corresponding L (Optional) variant with safety features by Rs 7,000. That’s a massive statement from Maruti with regard to its focus on safety. What’s important to note is that the Dzire is built on Maruti’s Heartect platform that makes it ready for future safety norms.

Other standard elements of the safety kit include ISOFIX child seat anchorages to secure your young ones and front seatbelts with pretensioner and force limiter. However, reverse parking sensor is offered only in the Z variant and if you want a reverse parking camera as well, you need to buy the Z+ variant. We wish Maruti had provided parking sensors at least in the V variant considering how important they have become for our road conditions these days. Features such as central locking, speed-sensing door locks and anti-theft system were standard earlier but are now offered only from V variant onwards.

CarDekho Experts:
The new Maruti Swift Dzire has a convincing sense of premiumness.