Along with a new front fascia, the new Ciaz also packs in a new engine and a few additional features 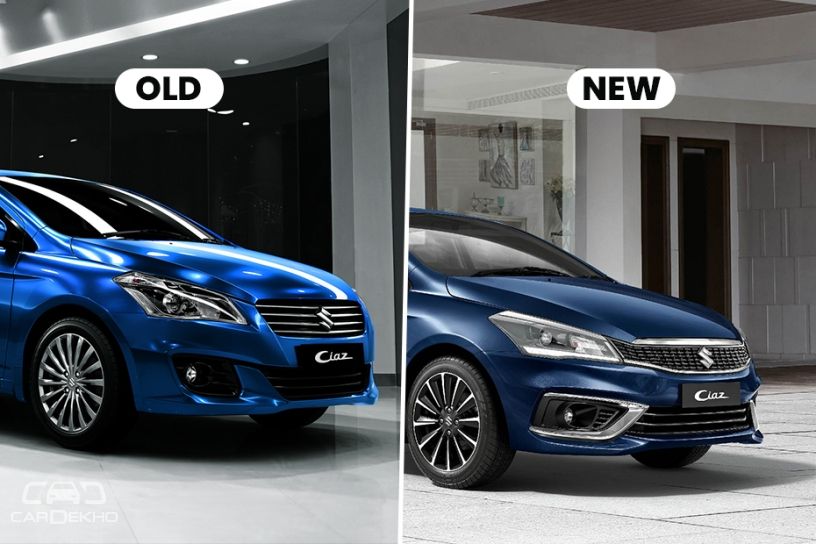 Maruti has launched the 2018 Ciaz in India at a starting price of Rs 8.19 lakh, going all the way up to Rs 10.97 lakh (ex-showroom Delhi). To set it apart from the older model, Maruti has given the Ciaz facelift some cosmetic updates along with a major mechanical one. What’s changed? Read on to find out.

Since it is a facelift, the 2018 Ciaz has remained unaltered on this front. It is identical to its predecessor in every possible dimension. So, expect the new sedan to be as spacious as its predecessor. The Ciaz has always been considered among the best when it comes to interior space, especially for rear occupants.

The new Maruti Ciaz looks pointier as it features an all-new front fascia. A sleeker, studded grille replaces the horizontal-slat setup found in the previous model. The slightly tweaked headlamps also feature updated detailing along with LED DRLs. The front bumper is also new and gets LED fog lamps instead of the halogen units available earlier.

From the side, the new Ciaz looks identical to the outgoing model. However, it now features new 16-inch dual-tone machine finished alloys (in the top-spec Alpha variant) instead of the 16-inch gun-metal finish alloys. While the alloys are new, the tyre size has remained unchanged at 195/55 R16. The 15-inch alloy wheels and steel wheels offered in the lower variants have also remained unchanged and continue to come with 185/65 R15 tyres. This time around, the Delta variant also gets 15-inch alloy wheels, which were earlier limited to the Zeta variant only.

Like the side, the rear of the sedan has also remained unchanged, save for some minor tweaks. The taillamps now get LED inserts and the rear bumper gets a chrome or silver coloured bezel (depending on the variant) around the reflector housing.

The changes on the inside are of the easy-to-miss kind. While the layout remains identical, the dark brown faux wood inlays on the dashboard and doors have made way for a lighter shade. The instrument cluster is also updated and looks more premium and intuitive than before. Along with the new dials, it also gets a new, colour 4.2-inch MID (multi-info display) screen which is exclusive to the Ciaz petrol.

With the update, Maruti has also introduced cruise control in the Ciaz. Controls for the same have been placed on the right spoke of the steering wheel.

The new Ciaz gets additional safety features as well. Aside from dual front airbags, ABS with EBD, and ISOFIX child seat anchors, the updated sedan also gets rear parking sensors, speed alert system (SAS) and seatbelt reminder (SBR) as standard. The 2018 Ciaz also comes with electronic stability program with hill-hold, but it is limited to the petrol automatic variants only.

The 2018 Ciaz is powered by a new 1.5-litre petrol engine that makes 12PS and 8Nm more than the older 1.4-litre engine it replaces. It is also more frugal than before, thanks to the Smart Hybrid tech it packs. The 2018 Ciaz is the first petrol-powered Maruti to get the SHVS technology.

Although the 2018 Ciaz petrol is powered by a new engine, the transmission options have remained unchanged. It continues to come with a 5-speed MT and a 4-speed AT like its predecessor.

While the Ciaz gets a new petrol engine, the diesel Ciaz continues to be powered by the same Fiat-borrowed diesel engine, mated to a 5-speed MT.

With the update, Maruti has also introduced two new colour for the Ciaz: Magma Gray and Premium Silver. While the Magma Gray replaces the Glistening Gray, Premium Silver has replaced the Silky Silver. Other exterior colours that are on offer include Pearl Midnight Black, Nexa Blue, Pearl Sangria Red, Pearl Metallic Dignity Brown and Pearl Snow White from the earlier model.