Hold Our Money! We Want These 4 Modified Cars From Auto Expo 2023

These four cars just get cosmetic upgrades over their regular models, but definitely look sportier and cooler 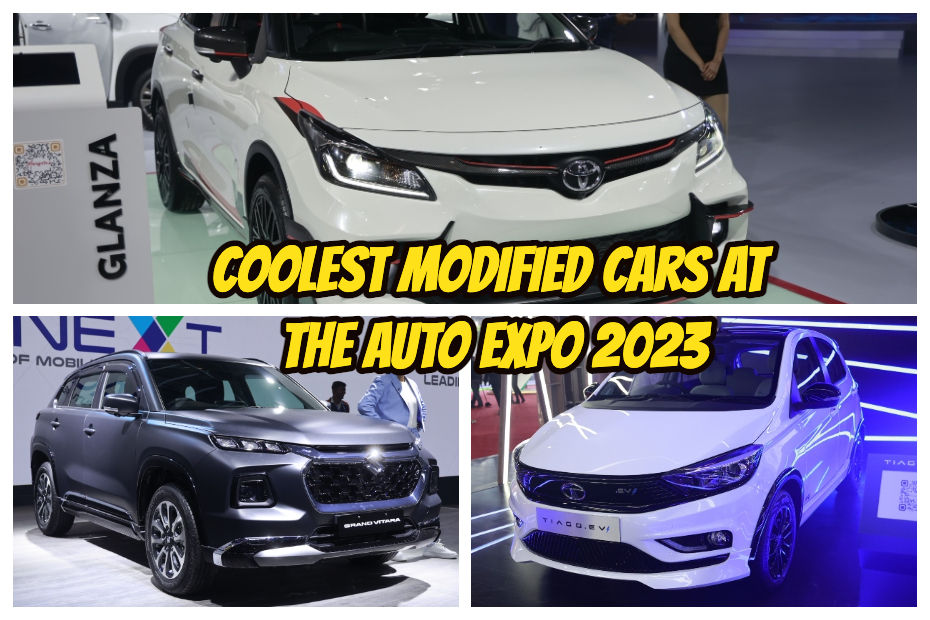 At the Auto Expo 2023, we saw several concepts, some of which will make it to production, while some won’t. Besides the regular EV concepts that we saw, Maruti, Toyota and Tata had displayed some cosmetically modified cars on the stage as well. While it seems unlikely that they will ever be offered to customers, we sure would want them on sale. Here’s all you need to know about them:

While Maruti has launched its Black editions for the NEXA lineup, it also showcased the Matte Editions of the Grand Vitara and Brezza.  The Brezza was finished in matte blue, while the Grand Vitara was draped in a sporty matte black colour. The only other SUVs to be offered in a matte finish have been the Kia Seltos and Sonet X-Line.

However, these matte colours were just limited to the show cars and Maruti gave no comment regarding their launch. We do hope that Maruti brings these matte editions to the market.

No, this isn’t a Tiago EV JTP, but the Blitz. The kitted-up Tiago EV surely looks like a hot electric hatch. It’s finished in glossy white shade with black elements for the grille, roof and ORVMs. Body skirts and bumper extensions gel well with the glossy black wheel arches and the 15-inch black alloy wheels, previously seen on the Tiago JTP, complement its aggressive styling.

The sporty aesthetic changes have not been carried through to the interior though, but some glossy black elements would be welcome. There’s no word from Tata yet about the Tiago EV Blitz making it to showrooms, but we’re rooting for it and we know how much the brand loves launching special editions.

Not The Toyota Glanza GR Sport

While this version of the Toyota Glanza does look like a proper GR Sport variant, it sadly is not. The benefit of a purely visual modification is that it is more likely to be offered in India than an actual performance variant. Up front, it gets the bumper skirt, slats on either side and a tweaked grille - all with red accents and carbon-fibre finish.

Also Read: Toyota Recalls Close To 1,400 Units Of The Glanza And Hyryder

The side profile also looks tasteful with the side skirts, slick-looking black alloys, red calipers, and carbon-fibre ORVM caps. At the back, you get a single exhaust which looks to be race-spec. Even the bumper has been reworked and sports skirts and red accents. The smoked headlamps add more to the aggressive look and last but not the least, it gets the dual-tone glossy white and matte black shade, the latter also flowing into the pillars.

Even inside, the hot Glanza gets red and black elements with several bits sporting the carbon finish. The overall layout however remains unchanged.

We surely want this specced up version of the Toyota Glanza. Maruti could maybe lend the Fronx’s 1-litre turbo-petrol engine to this Glanza, and we have a reliable and fun hatchback. There’s no official word on its launch, but we surely want to see it. The sportier Glanza would go up against the Hyundai i20 N Line and Tata Altroz Racer.