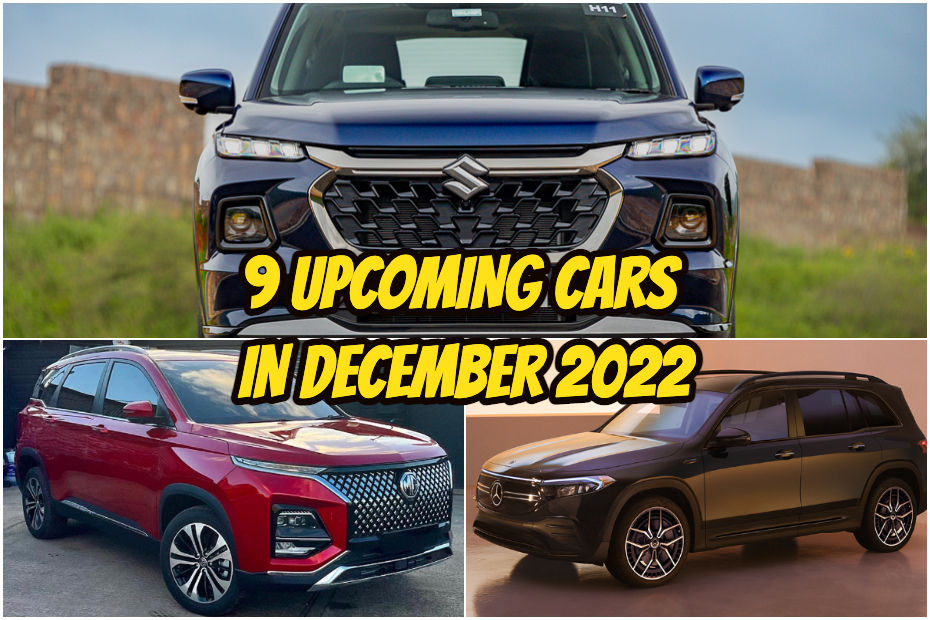 In the last month of 2022, we’re going to witness some interesting launches and unveils from manufacturers like Maruti Suzuki, Citroen, MG, Mercedes Benz and BMW. This month’s basket includes two new CNG SUVs, an electric hatchback, a three-row electric SUV and one of the most powerful hybrid SUVs.

Here are all the models that are coming in December:

MG is likely to reveal the facelifted Hector on December 20, here. The updated version of the SUV was recently leaked online and we got to see its refreshed exterior design in entirety. The facelift’s cabin layout also receives a complete makeover with new features such as a 14-inch touchscreen system and a digital driver’s display. The Hector facelift will also receive ADAS (advanced driver-assistance systems) featuring automatic emergency braking, adaptive cruise control, lane-keep assist and blind spot detection. No mechanical changes are expected on board and the SUV should continue with its petrol, petrol mild-hybrid and diesel engine options.

While Toyota has announced the Hyryder CNG and is accepting bookings for it, details like the specifications and prices are yet to be revealed. We’re expecting its prices to be out in December. Its 1.5-litre mild-hybrid petrol engine is getting the CNG option. The power figures will be less while running on CNG and Toyota claims this model will offer a fuel efficiency figure of 26.1km/kg. Once launched, it will be the first SUV in India to get the cleaner fuel alternative, shortly followed by its sibling from Maruti.

Maruti is also expected to launch the Grand Vitara CNG in December. It will share its 1.5-litre petrol-CNG engine with the Hyryder and should also deliver around 26 km/kg. We see the same engine on the Ertiga as well, which delivers 88PS and 121.5Nm while running on CNG. Both compact SUVs will just get a manual transmission in the CNG variants.

We’re expecting Citroen to unveil the all-electric C3 in December, while the launch may happen in January 2023. There’s no hint about the specifications, but we’re expecting it to get the Peugeot e-208’s 50kWh battery pack and offer over 350km of range. Going by the spy shots, it should just get some EV-specific changes but wouldn’t look too different from the ICE-powered C3.

Mercedes is all set to launch two new three-row SUVs on December 2. For the first time in India, an SUV’s electric and ICE powered version are being launched simultaneously. The EQB and GLB will be fully imported SUVs. Mercedes is expected to offer the GLB with 2-litre petrol and diesel engines priced in the Rs 65 lakh to Rs 70 lakh range (ex-showroom). As for the EQB, it’s getting a 66.5kWH battery pack which should offer a range of over 400km.

BMW is going to launch the facelifted versions of X7 and M340i on December 10, along with its first dedicated M-performance SUV, the XM. The luxury-oriented SUV shall get cosmetic changes inside-out with new features such as a 12.3-inch digital instrumentation and a 14.9-inch touchscreen system.

BMW is going to launch the facelifted 3 Series in India, but it’s starting with the M340i first. The performance-focused sedan is getting exterior and interior visual upgrades and some feature additions too. It would continue with its 388PS, 3-litre, six-cylinder, turbo-petrol engine.

As for the XM, it’s one of the most powerful BMWs ever made. The 4.4-litre V8 twin-turbo engine is assisted by hybrid technology to give you immense performance. With over 650PS and 800Nm of torque on offer, it can sprint from standstill to 100kmph in 4.3 seconds. It also gets an electric motor which is good for a range of 88km.

"WhatsApp"
T
Published by
Was this article helpful ?