There are plenty of new cars and concepts to explore, many of which are being seen for the first time ever 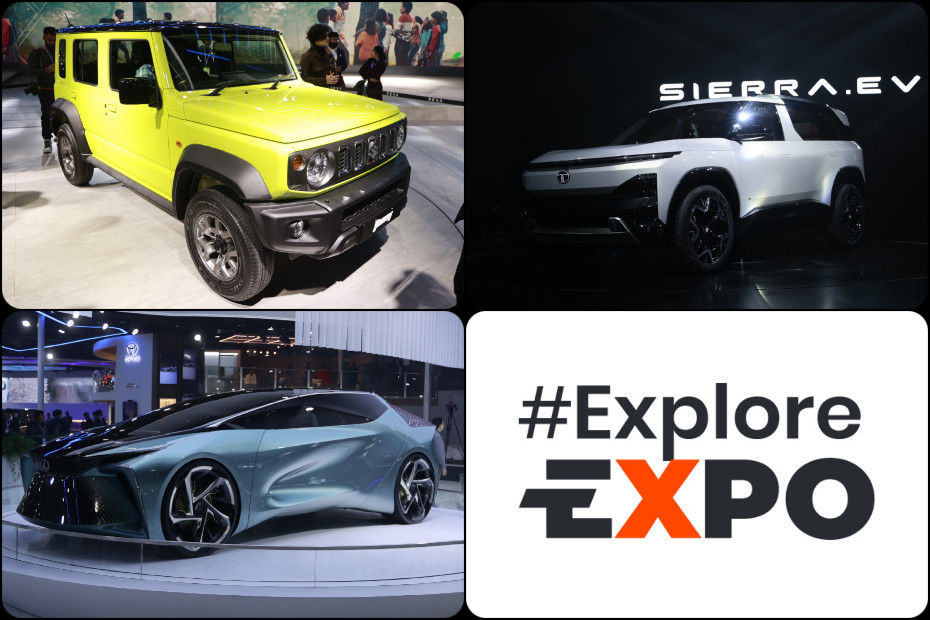 The Auto Expo 2023 is finally open to you, the public. Car manufacturers have revealed all the new models and concepts they were working on and we’ve brought all that action, and more, right to you. However, if you do plan to attend India’s biggest motor show this weekend, these are the cars you really need to check out for yourself as well:

One of the biggest stars at this motor show is the five-door Maruti Jimny. The extended version of the globally-popular off-roader made its world premiere at Auto Expo 2023 and is expected to reach showrooms by March 2023. It has been introduced with 4WD as standard, powered by Maruti’s 1.5-litre petrol engine with choice of five-speed manual and four-speed automatic transmissions.

While there, do check out the accessorized version of the new five-door Jimny as well which is on display at the Maruti stall. Bookings for the Maurti Jimny are also underway and this might be the best time to have a closer look in case you’re planning to put your name down for one.

The extended version of the Jimny shares the limelight with Maruti’s newest creation, the Fronx. Based on the Baleno hatchback, the Fronx has the same set of features too while the design takes inspiration from the Grand Vitara compact SUV. It gets extra brownie points for bringing back the 1-litre Boosterjet turbo-petrol engine, now with mild-hybrid tech and a six-speed automatic option.

The order books for the Fronx are open too and you should definitely have a closer look at the stylish new Maruti Nexa offering.

If you were somewhat disappointed by the lack of visual differences on the Tata Altroz’s turbo-petrol variants, the Altroz Racer might cheer you up. Adorning sporty decals and go-faster-stripes, it also gets the more powerful 120PS 1.2-litre turbo-petrol engine from the Nexon. Tata also showcased the Altroz Racer with an updated cabin with a new 10.25-inch touchscreen, red ambient lighting and a sunroof.

The latest generation of the Toyota Land Cruiser made its global debut in 2021 and has made a personal appearance at Auto Expo 2023. Toyota silently announced the prices too but it could be a while before we see some of these behemoths roaming the roads. But for the time being, you can take a closer look at the LC300 and its revised styling at Toyota’s stall at the Auto Expo.

Toyota Glanza with the sports kit

Moving to the other end of the Toyota spectrum, we have the humble Baleno fitted with an exciting set of accessories that make it look like a peppy hot hatch instead. Unsurprisingly, the changes are purely cosmetic but it would be too much to expect the rebadged Maruti Baleno to pack any serious heat under its bonnet. Still, maybe it can inspire some tasteful modifications from the fans.

The Ioniq 6 is the production iteration of the Prophecy concept showcased at Auto Expo 2020. The electric sedan is the second model in Hyundai’s Ioniq lineup based on the E-GMP platform. It has been showcased in its sporty black finish but in the rear-wheel-drive variant that promises a range of over 500km.

The fourth-generation of the Kia Carnival has made its long-awaited India debut at the same event where the current version was introduced. It looks even more premium than before and the interior gets much needed updates too. However, since Kia remains undecided about introducing the new Carnival to India, this might be your best chance to see it and maybe persuade the carmaker to launch it here.

Staying on the topic of MPVs, you might as well stroll through the MG pavillion to check out the Mifa 9. Proclaimed as the world’s first full-size electric people carrier, the Mifa 9 is even bigger than the Carnival and the unit on display has the roomiest cabin with the business class styled seats in the middle row. While it is on the list of models being evaluated for India, it is unlikely to make the cut, so go check it out while it’s here.

The luxury arm of Toyota, Lexus, has a few cool cars and concepts on display at its Auto Expo stall. Among them, is a luxury MPV which gets a privacy screen between the front and rear halves of the cabin, a wine cooler, massage functions for the rear seats and more. It’s called the Lexus LM and it will be offered in India later this year.

One of the most surprising announcements of Auto Expo 2023 was from EV-specialist BYD. It showcased one of its newer creations, the Seal EV sedan, alongside a new special edition green-coloured Atto 3. With its sporty and premium design, the Seal EV promises a range of up to 700km, and BYD will be launching it in India later this year.

What About Concept Cars?

Given that Tata’s pavillion is one of the key attractions for Auto Expo 2023, it also has the most exciting concept cars to check out. Let’s start with the one that looks closest to production, the Harrier EV. It is the electric avatar of the Tata Harrier which also sports the design changes that are expected to be offered on the soon-to-be-launched facelift of the diesel SUV.

Next and perhaps more exciting is the new concept for the Tata Sierra EV. It was so popular at Auto Expo 2020, Tata had to make another one, except this is the design that’s going to make it to the production model. With an expected launch in 2025, the Sierra is one of the most exciting new SUV concepts at Auto Expo 2023.

No, this is not the same car that Tata unveiled back in the first half of 2022. That was the Concept Curvv ELECTRIC coupe SUV. This is its petrol-powered cousin, unveiled in a sporty red avatar with powertrain-related design tweaks to the front and rear profiles. It is expected to launch in 2024 with the newly revealed 125PS 1.2-litre turbo-petrol engine. Like the Sierra, the Curvv’s design is also quite close to the production-spec model.

As mentioned above, Lexus has a fair few cool cars on display at this year’s Indian motor show. That includes a few concepts too, and we feel that the one to see is this, the LF-30. With doors as long as the wheelbase and a rear end from a spaceship, it is the most Japanse-styled, unrestricted concept vehicle at Auto Expo 2023.

In the sea of electric and electrified creations, there is one that refuses to be silenced just yet. If you’re only interested in things that make noise and spit smoke, be sure to check out the Toyota stall for the Hilux Extreme Off-roader concept. Fitted with numerous modifications suited for tackling hostile terrains, this brute is definitely one to see in person.

You can also find all the action from the Auto Expo 2023 right here.