Does Mahindra’s new MPV pack enough to fight off competition in the people-mover segment? We find out 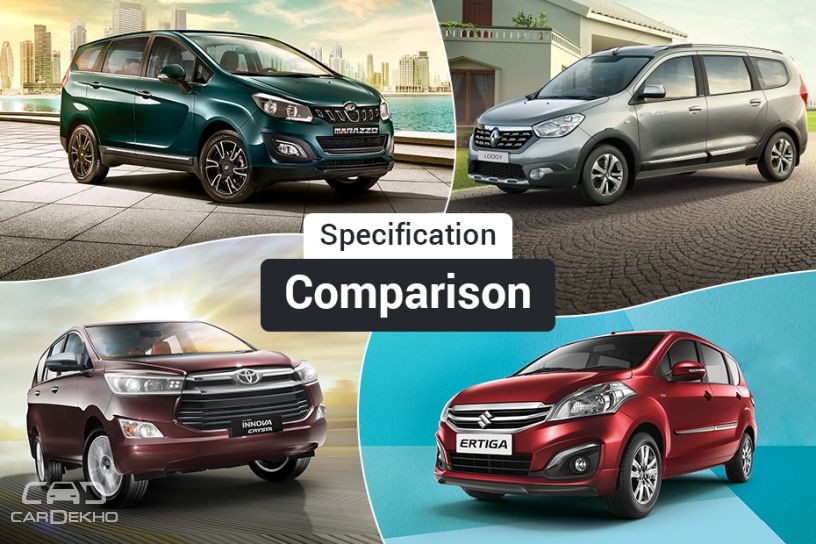 Mahindra Marazzo’s prices range in between the range of Rs 10 lakh to Rs 13.90 lakh. With this, it doesn’t have any direct rival but a few established rivals at both ends of the spectrum. Rivalling its lower variants is the Maruti Suzuki Ertiga, Renault Lodgy while the higher variants undercut the Toyota Innova Crysta. We put them in an on-paper comparison with the Mahindra Marazzo.

The Marazzo is longer and wider than the Ertiga, Lodgy and the TUV300 Plus. It is also wider than the Innova Crysta, but the Toyota is longer. The Marazzo's 2760mm wheelbase is only shorter than just the Lodgy, but longer than all other MPVs in this comparison. That speaks volumes about the kind of cabin space the latest Mahindra MPV might offer.

The Mahindra Marazzo is a body-on-frame vehicle with a FWD layout, which is a rarity. Unlike other body-on-frame MPVs in this comparison (Innova Crysta and TUV300 Plus), the Marazzo is powered by a sub-2-litre diesel engine. It's 1.5-litre diesel engine does appear a tad small for a ladder-frame MPV but despite being low on displacement, the engine produces the second highest power and torque on paper in this comparison.

When it comes to transmission options, it is only the Innova Crysta in this comparison that offers a choice with the diesel engine. The Mahindra Marazzo gets a 6-speed manual transmission for now, but the carmaker says it’s readying an automatic version as well. However, an automatic Marazzo is not coming until 2020.

The Marazzo’s smaller diesel engine (relatively) returns an ARAI certified mileage of 17.6kmpl, which is better than the Innova Crysta's, but it’s lower than unibody MPVs like the Lodgy and the Ertiga. Mahindra’s 2.2-litre diesel engine under the TUV300 Plus is also about 1kmpl more fuel efficient than the Marazzo’s.

The Mahindra Marazzo features dual airbags, ABS with EBD, disc brakes on all four wheels, impact-sensing door unlock, speed-sensing door lock and ISOFIX mounts as standard. Even its top variant gets only these many safety features, which may be a bit of a letdown for some, considering the Marazzo is otherwise a premium MPV.

The Toyota Innova gets an extra knee airbag for the driver from the base variant onwards. In its top variant, it gets 7 airbags, vehicle stability control and hill start assist too, which you won’t get in the Marazzo.

The Marazzo’s stablemate, the TUV300 Plus, misses out on the airbags and ABS on the base variant and doesn’t get ISOFIX mounts in any variant. If you want both the driver and passenger airbags with ABS on the Ertiga, you will have to opt for the LXi (O) variant which commands a premium of Rs 39,000 over the base-spec model. The Lodgy, meanwhile, gets ABS with EBD as standard but misses out on dual airbags on all except the top-of-the-line RxZ variant.

All the MPVs get a 7-inch touchscreen in their higher variants with connectivity options ranging from AUX-in and USB to Bluetooth. But none offer both Android Auto and Apple CarPlay pairing except the Ertiga. That said, the Marazzo’s infotainment system does offer Android Auto connectivity.

The Marazzo starts right at the Rs 10 lakh mark, which makes its entry-level variant more expensive than the base variants of all other vehicles in this comparison apart from the Innova Crysta. But at the same time, it’s also bigger than all the cars that undercut it on the price chart. Prices for the Innova Crysta start from over Rs 14 lakh but not only does it get more powerful engines, it’s also longer and better equipped as well.

On the whole, the Marazzo clearly bridges the gap between the Ertiga and the Innova Crysta, not only on the price chart but also on many other counts, like size, cabin space and engine power.