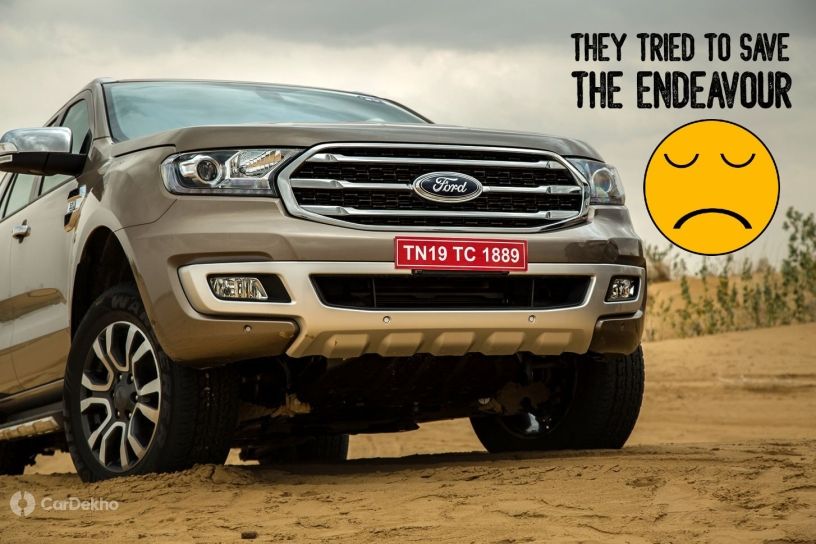 Ford has officially stopped production and sales of locally manufactured models in India which includes the reputed Endeavour. The company stated that it tried to keep the Endeavour alive despite its exit by trying to partner with another OEM for contract manufacturing but was unable to find an acceptable deal.

As of September 2021, it accounts for a little over 44 percent of the full-size premium SUV space, second only to the Toyota Fortuner which debuted in India years after the Endeavour. Ford stated that the second-gen Endeavour averaged annual sales of 10,000 to 12,000 units which is impressive for its price but not enough to financially justify keeping the factory going. That is one of the key reasons Ford considered contract manufacturing for its large SUV after closing its local production.

The Endeavour was also the brand’s longest running moniker in the market, lasting for nearly 18 years. It even managed to retain its position in the segment despite the arrival of new competitors in recent years.

Ford’s decision to close manufacturing and sales in India comes after accumulated losses of more than USD 2 billion over the last ten years. Despite being present in India for around 25 years, Ford models accounted for less than 2 percent of the passenger car market. Their models enjoyed a loyal fanbase for their build and performance.

The Ford Endeavour was last available in its facelifted second-gen avatar. It was offered with a single 2-litre turbo-diesel engine mated to a India-first 10-speed automatic transmission and produced 170PS/420Nm. The SUV was available with the choice of rear-wheel-drive or four-wheel-drive It lost the monstrous 3.2-litre 5-cylinder diesel that made 200PS and 470Nm as part of the BS6 updates.

As of September 2021, the Endeavour was priced from Rs 33.81 lakh to Rs 36.26 lakh (ex-showroom, Delhi). It competed against the Toyota Fortuner, MG Gloster, Isuzu mu-x, and Mahindra Alturas G4. Indian car buyers will surely miss the American SUV on their list of choices from hereon and allow the Fortuner to be unchallenged in the segment. If you were waiting to buy an Endeavour, trying to find one in stock with your local Ford dealer would be your best bet.

"WhatsApp"
S
Published by
Was this article helpful ?