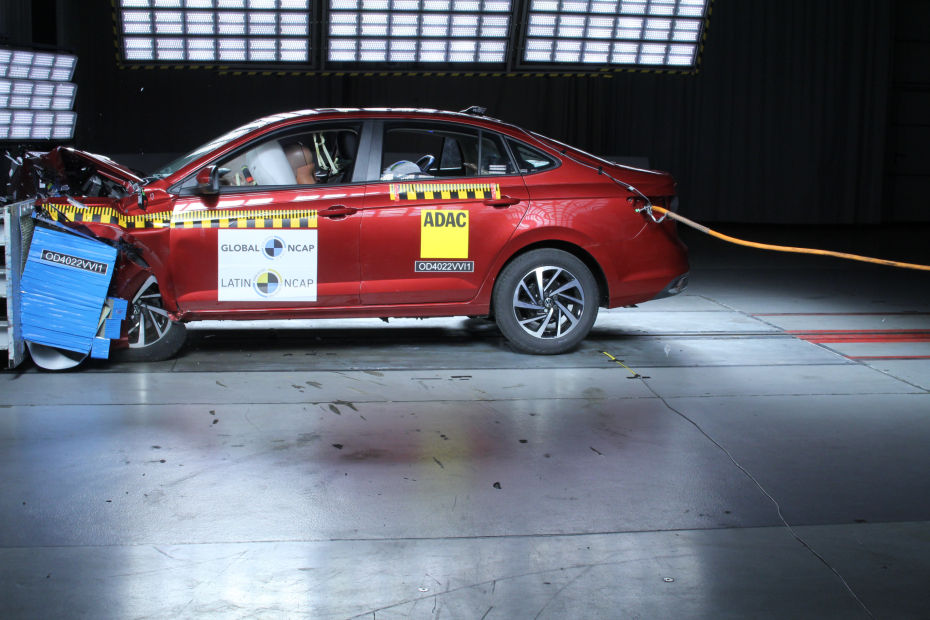 Volkswagen’s newest made-in-India compact sedan, the Virtus, has just been put through the Latin NCAP crash tests, and it passed with flying colours, i.e. a five-star rating. Although there’s no word on its Global NCAP crash test score yet, we can expect a similar result for the India-spec model as well.

Safety Equipment On Board

The VW sedan that was crash tested was equipped with six airbags and electronic stability control (ESC) as standard. Other safety features on board the made-in-India Virtus include ISOFIX child seat anchorages, hill-hold assist, a tyre pressure monitor, and a reversing camera. It was also equipped with AEB (automatic emergency braking) in its Latin specification, not as standard, and that feature is not offered on the Indian sedan.

The sedan scored 92.35 percent (36.94 points) in adult occupation protection. This includes the overall scores from both frontal and side-impact crash tests.

In the side-impact test, the protection offered to the head, abdomen and pelvis was ‘good’, while that for the chest was recorded to be ‘adequate.’

The Virtus, in the side pole impact, was stated to offer ‘good’ protection to the head, abdomen and pelvis, while its chest protection was ‘marginal.’

The Virtus got 91.84 percent in child occupant protection. Here’s its breakdown:

Both the child restraint systems (CRS) were able to offer full protection during the side impact. The VW sedan has ISOFIX anchorages as standard and meets all the necessary marking requirements. All seating positions are equipped with three-point seatbelts.

The Virtus obtained a comparatively lower result of 53.09 percent (25.48 points) in pedestrian protection. Volkswagen’s compact sedan showed the majority of areas with ‘good’, ‘marginal’ and ‘adequate’ protection levels. It lost most of its potential score due to the upper leg protection, where performance was overall ‘weak’; lower leg protection, however, was deemed to be ‘good.’

The Latin NCAP’s crash test result showed 84.98 percent (36.54 points) for the safety assist of the sedan. Volkswagen has equipped the sedan with seatbelt reminders in all seating positions and ESC as standard. Although the tested model didn’t have the full suite of advanced driver-assistance systems (ADAS), it did feature autonomous emergency braking (AEB) and forward-collision warning (FCW) which helped in its overall ‘safety assist’ performance. These ADAS features are not offered on the India-spec Virtus.

The VW sedan has been on sale in India since June 2022 and is offered in two broad trims: Dynamic Line and Performance Line. While it only comes with dual front airbags as standard, it will likely soon be updated to also offer six airbags as standard as seen in its Latin specification. Volkswagen currently retails the Virtus between Rs 11.32 lakh and Rs 18.42 lakh (ex-showroom Delhi).