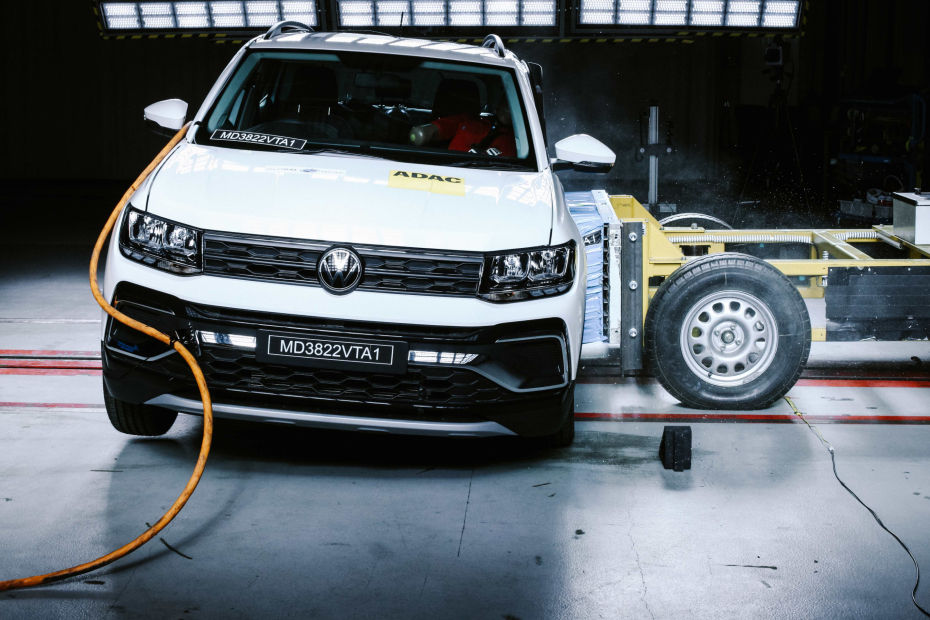 In another round of crash-testing cars under its #SaferCarsForIndia campaign, Global NCAP has now released the results for cars including the Volkswagen Taigun. Do note that the VW SUV, along with its Skoda sibling, were tested according to Global NCAP’s updated standards, which now also includes side impact and electronic stability control (ESC) as parameters.

The Taigun has secured five stars for both adult and child occupant protection and it was, like most cars Global NCAP tests, tested in its most basic safety-spec version. The Skoda Kushaq too has received an identical score.

Under the newly introduced side impact test, protection to the head, abdomen and pelvis was cited to be ‘good’ while the cover for chest was deemed ‘marginal’.

The result also mentioned that the fitment of the curtain airbags was as per the required protocols. In the side pole impact test, the head and pelvis got ‘good’ protection from the curtain airbag while ‘adequate’ cover was offered to the abdomen. Chest protection was rated as ‘marginal’.

The crash-test result also stated that the ESC in the VW Taigun met the fitment rate requirements and the performance shown in the test was acceptable according to the Global NCAP’s latest requirements.

Both the child restraint systems (CRS) were able to offer full protection during the side impact test.

Expert’s Response On This Feat

Alejandro Furas, Secretary General of Global NCAP said, “We welcome and congratulate Skoda and Volkswagen’s initiative to meet Global NCAP’s new five star requirements for the Kushaq and Taigun through voluntary testing. We urge all car makers to aspire to and achieve this level of crash test performance going forward, maintaining the momentum of safety improvements we have seen steadily develop through our programme since we began our Indian testing in 2014”.

David Ward, President of the Towards Zero Foundation said, “Following the introduction of Global NCAP’s more demanding protocol enhancements in July, it is satisfying to already see these five star crash ratings for VW and Skoda. The majority of domestic and international automakers understand that Indian consumers rightly expect high safety standards as a minimum requirement. We look forward to this trend continuing when Bharat NCAP gets underway next year.”

Safety Kit On The VW SUV

The Taigun gets three-point seatbelts for all five passengers, ISOFIX child seat anchorages, dual front airbags, ESC, a tyre pressure monitor, and rear parking sensors as standard. Volkswagen has equipped its higher variants with up to six airbags, hill-start assist, and a reversing camera.

The Taigun has been on sale since September 2021 and it recently completed a year in the Indian market. Volkswagen asks between Rs 11.56 lakh and Rs 18.71 lakh (ex-showroom Delhi) for the SUV.