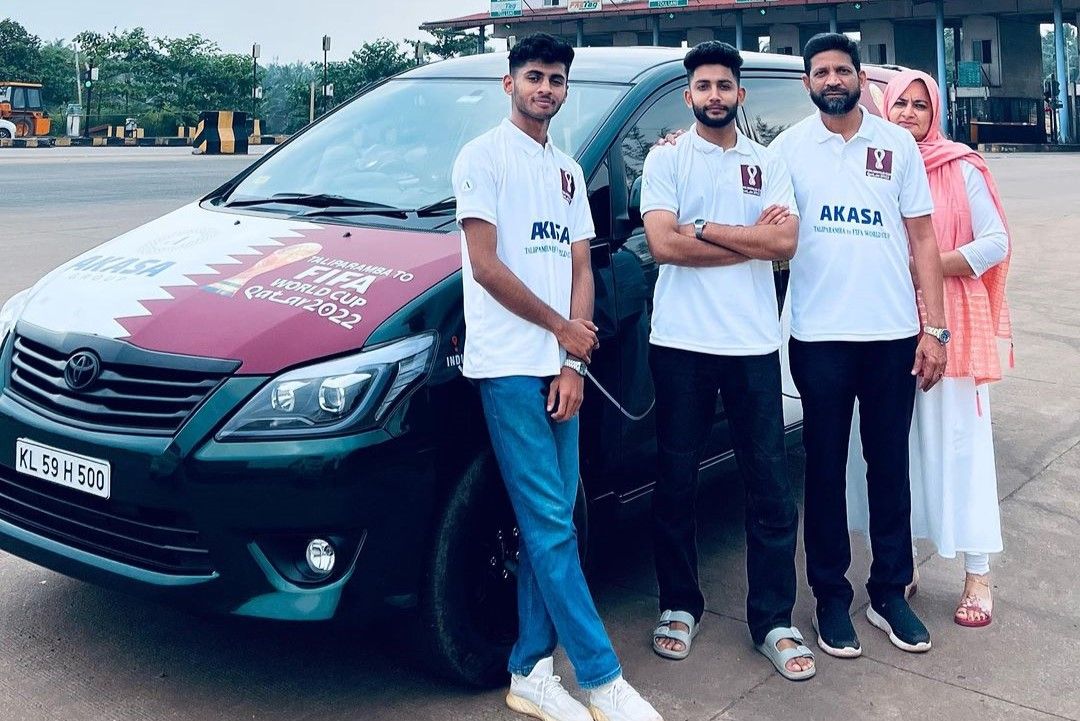 An Indian family has arrived in Qatar to watch the Fifa World Cup after travelling for nearly 30 days in their Toyota Innova. The family, comprising Abdulla Ibnu Ashraf, his parents and cousin Mohammad Faraz, started their journey in Kannur, Kerala, on October 30. They arrived in the United Arab Emirates (UAE) last month and have been travelling across the Emirates since then.

“I have always been a football fan, so when we heard that the World Cup was taking place in Qatar in 2022, I decided we must watch it live,” says Abdulla’s father KVT Ashraf. Getting to Qatar would have been pretty straightforward if they had taken a flight as they had previously planned. But Ashraf had bigger plans.

“My father started talking about going to Qatar by road,” says his son, Abdulla. “At first, I didn’t take him seriously, but then I started contemplating it as the days passed. So, I spent the next couple of weeks researching and getting all the necessary permits.”

One look at the world map will tell you that getting to Qatar by road can be extremely difficult, if not entirely impossible. In fact, it’s hard to even cross India’s western border, as the family found out. Ashraf says, “it soon became evident that getting permits for Pakistan would be an issue, so we decided to travel to Mumbai and ship the car to Jebel Ali (in the UAE).”

Since then, the family has been travelling across Oman, Bahrain, Kuwait and Saudi Arabia, visiting attractions such as Jebel Jais and the Burj Khalifa. They had already booked the tickets to watch the football match with Germany and Costa Rica today and plan to watch the quarter-finals and semi-finals as well.

Travelling in an Innova

The Toyota Innova has always been the workhorse of choice for long roadtrips owing to its powerful diesel engine, comfortable seats and decent ride quality. The family’s Innova is a first-generation facelifted model that was recently revamped with a fresh set of aftermarket LED projector headlights with DRLs, aftermarket taillights and a racy dark green paintjob. According to Faraz, “we also got all the machinery checked and necessary repairs were done.”

The road trip has been a bonding experience for the family. Ashraf says, “we have spent all the time talking, teasing and enjoying each other’s company. Sometimes we forget to switch on music because we are so busy talking to each other.”

Owing to their right-hand drive, sticker-covered Innova, the family has also become an attraction for football fans. “It has been an amazing experience. We have met and befriended so many people. So many have come to take photographs with us,” says Abdulla.

The football-loving Kerala family is clearly having a good time travelling across the Emirates. You can keep up with their travels on the Instagram pages linked in this story.