BMW 3 Series vs BMW 5 Series: Worth Spending That Extra Money?

Should you consider skipping the 3 Series and jump on to the elder sibling? 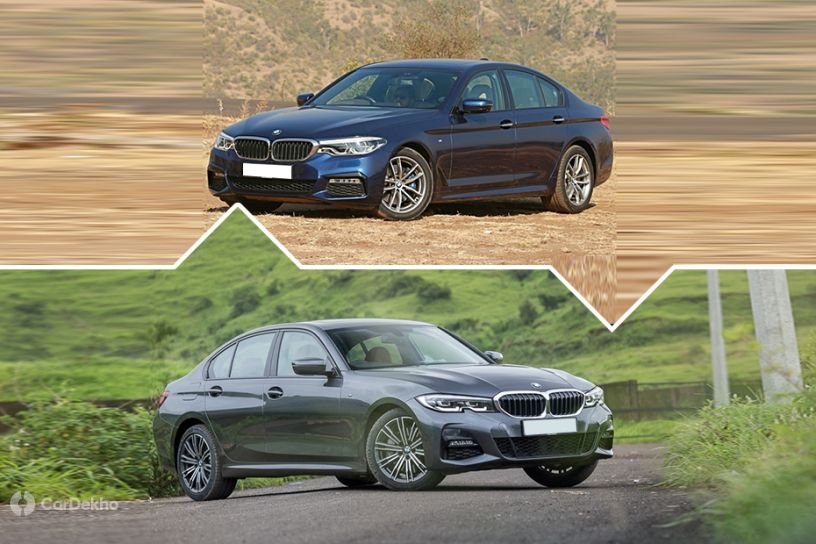 We’d love to be in a dilemma like this. Choosing between what are arguably the best driver’s luxury sedans in the country. On one end we’ve got BMW’s 3 Series, a small sedan that promises an easy entry into the elite luxury car club. On the other, there’s the bigger 5 Series that amplifies what the 3 has, brings some added practicality and more snob value to the equation.

Let’s get the basics of price out of the way first. We see a similar approach in the variants for both sedans:

With that out of the way, let’s see where each of the two siblings have an upperhand, starting with the 3.

It’s interesting to note that BMW India has not chosen to offer detuned versions of the 2.0-litre petrol and diesel motor in the 3 Series. Just like the 5 Series, both these engines make 190PS of power. This has an obvious advantage in terms of acceleration as the smaller sedan has lesser weight to lug around.

In a straight line, the petrol 3 Series is quicker by 0.3 seconds, whereas the diesel takes a sizeable 0.7 second lead. In fact, the 330i is just as quick as the 530d, and that’s a big compliment by itself.

With the 3 Series being 227mm smaller, 58mm narrower and 31mm shorter, it’s definitely the one to pick if you’re looking for fun. The wheelbase is tighter by 124mm too, which translates to more grins when you’re driving on twisty mountain roads. With the new generation, the 3 Series carries forward the fabled 50:50 weight distribution, making it that much more balanced, predictable and fun to hustle around.

Sure, you’re paying approximately Rs 15 lakh less for the smaller car. The latest generation (G20) of the 3 Series, however, doesn’t make it obvious. It has pushed the envelope in terms of quality levels inside-out and gives you quite a lot of the feel-good features too. This includes full-LED headlamps, three-zone climate control, gesture control and even a fully-digital instrument cluster in the M Sport variant.

The entry-level 530i Sport makes a super strong case for itself. That’s because it’s asking for about Rs 7 lakh more over the top-spec 330i M Sport. It isn’t bare-bones in any manner, compared to the 330i M Sport. In fact, it offers quite a bit extra including adaptive LED headlamps, configurable ambient lighting, BMW’s oh-so-geeky display key, and electric steering column adjustment.

More For The Family

With the bigger dimensions comes more space to lounge around. Whether you’re looking to be chauffeured to work, or want a vehicle where the family has more room: it’s the 5 Series that delivers on this front. The 3 has always been a driver’s car, and although BMW claims there’s improved rear-seat space in the new one, it is slightly cramped. The width, knee room and headroom at the rear will feel far better in the 5, for sure.

The 530-litre boot of the 5 Series betters the 3 Series by a full 50-litres. So, there’s more for the family’s luggage too.

For starters, you’d notice that the 5’s cabin doesn’t use as much hard plastic as the 3. Then there are the feel-good features over and above those we discussed earlier. The head-up display, a 10-speaker Harman Kardon audio system, remote control parking, wireless charging and 360° camera ups the geek quotient of the 5 Series tremendously.

These features go a long way in ensuring you don’t feel the itch to switch quickly. Win win, we say.

So, spend more or not?

We’d recommend sticking with the 3 Series for two broad reasons: you prefer driving on your own, and you don’t really have company most of the time. The 3 Series - especially the 330i M Sport - makes for a sweet entry into the world of performance motoring. It will do just enough to please the closet enthusiast within you.

However, if you’re looking for a comfy petrol sedan for the family, it’s worth reaching for the 5 Series directly. And the same applies if you want a six-cylinder diesel for those satisfying highway sprints. A similarly priced warranty package, the additional features and space simply sweeten the deal further.