All The Auto Expo 2023 Cars That Will Be Launched This Year, Plus Some Others We Want To See Too! 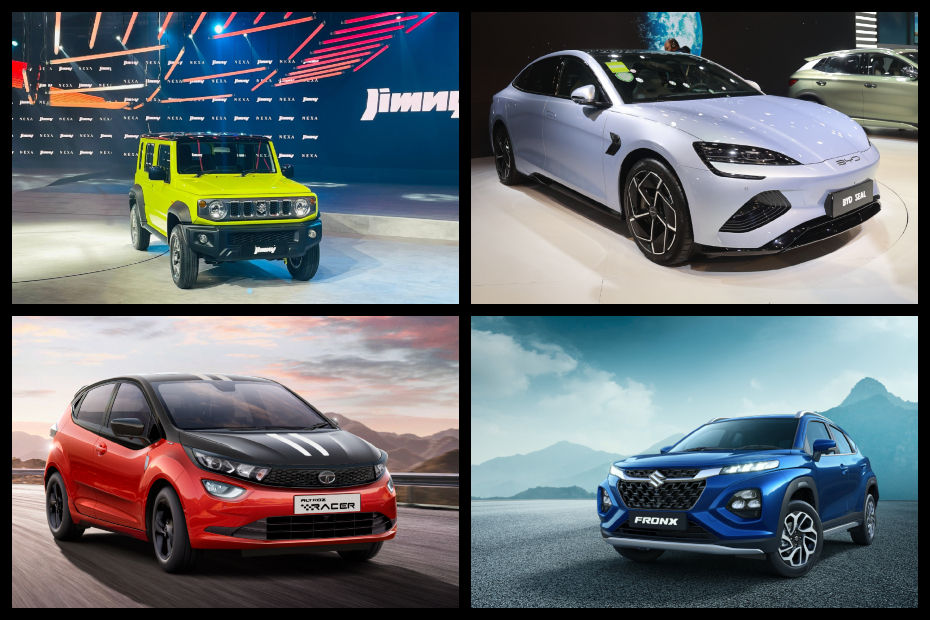 Although this edition of the Auto Expo didn’t see much participation from carmakers, we still got to see a lot of action on its first two days. Among all the models that were showcased, a few marques also disclosed the launch timelines of their upcoming products.

In this story, let’s take a look at all the cars that have been confirmed for a launch in 2023 while the rest are the models that we expect to hit showrooms by this year-end:

Maruti finally unveiled the long-wheelbase Jimny in India at the Auto Expo 2023. The SUV will get a 1.5-litre petrol engine with idle-engine start/stop and a four-wheel drivetrain as standard. Transmission options will be either a five-speed MT or a four-speed AT. Its bookings are already underway while its launch will happen by March 2023.

Another Maruti model that was revealed alongside the five-door Jimny at the 2023 Auto Expo was the Fronx. The Baleno-based SUV marks the return of turbo-petrol engines (it'll get a 1-litre BoosterJet unit with mild-hybrid tech) for the carmaker, and will also be offered with the Baleno’s 1.2-litre DualJet petrol engine. It also borrows design and feature cues from the larger SUV sibling, the Grand Vitara, and will likely go on sale by April.

Lexus is set to bring in the fifth-generation RX to India by March. The new SUV will be positioned between the entry-level NX and flagship LX in the carmaker’s SUV portfolio in our country. It will be offered in two trims with a set of petrol engines and an option of an all-wheel drive (AWD).

At the Auto Expo 2023, BYD took the covers off its global electric sedan offering, the Seal. The EV maker confirmed its plans to introduce the Seal as the next electric vehicle in the Indian market. We are expecting BYD to launch the Seal, which has a claimed range of up to 700km, by around Diwali this year.

Tata has plonked the Nexon’s 120PS 1.2-litre turbo-petrol engine in the Altroz in a standalone iteration called the ‘Racer.’ But the powertrain upgrade isn’t the only difference between the standard Altroz and its Racer counterpart. The latter also gets some cosmetic updates and a few new premium features. Thankfully, you will be able to get one home soon as the carmaker has just confirmed its launch.

There’s another Lexus model that’s slated for a launch this year in India. The carmaker will be bringing the LM MPV, its luxury offering, to our market possibly towards the end of 2023. It is known for its opulent in-cabin experience and is globally sold in both four- and seven-seat configurations.

Cars That We Expect To Arrive In 2023

Among all models on display at Tata’s pavilion, there was the Tiago EV too but not how we are used to seeing it. The marque has showcased it in a sportier avatar which includes upgrades such as a white paint shade, 15-inch alloy wheels and body skirts. While Tata hasn’t shared its specifications, we believe it had the same battery pack options as the regular Tiago EV. We believe Tata could launch it sometime around December 2023 to mark the electric hatchback’s one-year anniversary.

Also Read: Refuel Or Recharge, Tata To Offer Both Choices For The Sierra

CNG has always been on offer with small hatchbacks and sedans alike. That said, SUVs have also started to get the alternative fuel option too, as seen recently with the Maruti Grand Vitara. Now, the carmaker seems to be eyeing the sub-4m SUV space for the optional CNG powertrain with the Brezza, which has been put up at its Auto Expo pavilion.

As if the number of special editions of its flagship SUV duo, the Harrier and Safari, weren’t enough, Tata has put up the ‘Red Dark’ versions of the two at the 2023 Auto Expo. Both of them get some cosmetic upgrades and some new features including a bigger touchscreen and advanced driver assistance systems (ADAS). While we expect the two SUVs to be launched with these five updates, we aren’t sure which of them will make their way to the existing equipment list of the SUV duo.

Kia’s flagship MPV for our market is the Carnival. The carmaker showcased the Carnival’s brand new generation at the 2023 Auto Expo and has stated that it’s still evaluating the MPV for our market. That said, we would want to see the new Carnival on Indian shores due to its evolved looks, a more premium cabin, and the possibility of it retaining its refined diesel engine.

At 2023 Auto Expo, we also got our first look at the CNG kit-equipped Tata Altroz and Punch. These could soon be the latest additions to the carmaker’s CNG portfolio alongside the Tiago and Tigor. With these models, Tata showcased its twin-cylinder tanks in the boot to offer a healthy boot space. We have also covered the Altroz CNG and Punch CNG in images for you to check them out in detail.

While these are the models that have been confirmed and are expected to go on sale this year, some of the other showcased cars could also make their way to their respective Indian showrooms. Do let us know which other expo car(s) would you like to see be launched. Check out our Auto Expo 2023 page to find all the action from the mega event.

Electric Car
Upcoming Electric Cars
HomeNew CarsNewsAll The Auto Expo 2023 Cars That Will Be Launched This Year, Plus Some Others We Want To See Too!