Explore the latest version of the top subcompact SUV in India for its design, cabin, features and more in a detailed walkthrough 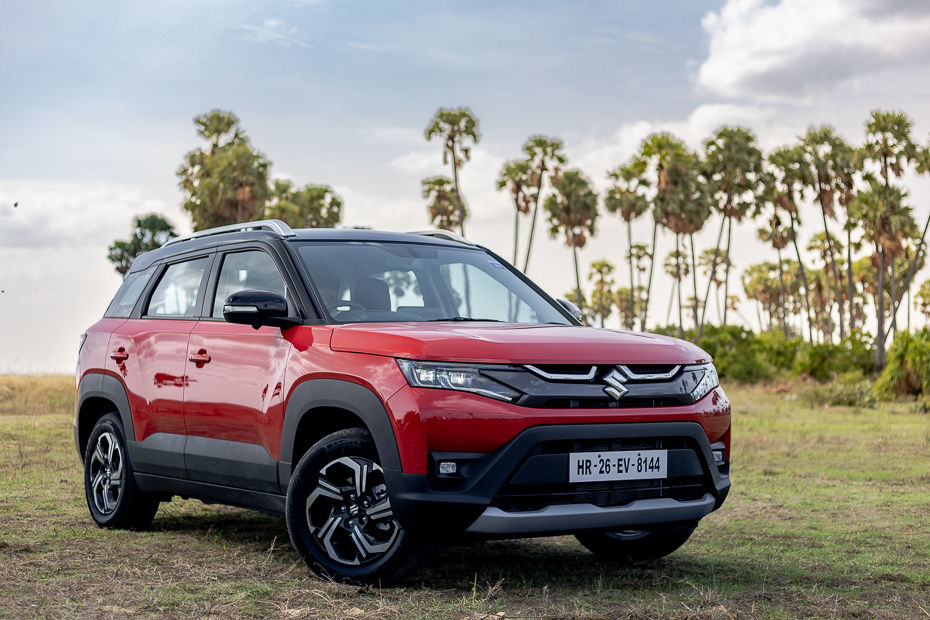 The Maruti Suzuki subcompact SUV has grown up in 2022 and now has its unique identity in the lineup. Gone is the Vitara prefix, as the Brezza is now a stand alone staple of the SUV space. With new styling, an updated powertrain and a plethora of premium features, there is a lot to explore about the new Maruti Brezza. Here’s a detailed walkthrough in the gallery below:

The all-new Brezza has a modern SUV styling with plenty of cladding and black panels that make up the front fascia. The LED fog lamps are housed in the corners of the bumper.

The Brezza comes with sleek dual LED projector headlamps in its higher trims, with integrated LED daytime running lights which double up as turn indicators.

While the Brezza has a similar profile to its predecessor, it is less boxy and seems better proportioned matching the rest of its matured styling.

The Brezza gets stylish 16-inch alloy wheels with a dual-tone finish.

Maruti has done a good job of integrating the turn indicators into the outside rearview mirrors without disrupting the styling.

It comes with functional roof rails which is the key reason for the increase in height over its predecessor.

This is perhaps the best angle for the new Brezza as it is the most different from the Vitara Brezza. The styling emphasizes its width while the fairly visible rear skid plate adds to its rugged look. Also, the car now features its own bold identity in letters on the bootlid and between the taillights.

These sleek LED taillights with their modern light signature are the highlight of the Brezza’s rear-end design that make it look more premium.

The Brezza’s interior has also become more premium and mature, same as the exterior. Its highest trim features a dual-tone interior with fabric upholstery and a leather-wrapped steering wheel. However, this interior finish is so mature, it is borderline dull in comparison to some of its segment rivals. Also, the actual quality of the interior feels like it could have been better to match its premium looks and price.

Maruti has equipped the Brezza with the now familiar flat-bottom steering wheel from the new Baleno and XL6. It has a modern dashboard layout but its design is more mature than exciting.

The steering mounted controls allow the driver to control the media playback from the left panel while the right panel is for operating the multi-information display in the instrument cluster, and for the cruise control.

The separate console for the steering mounted telephony controls in the bottom left is a part of the distinctive experience of being in the driver’s seat of a Maruti car.

The Brezza’s automatic variants also come with paddle shifters behind the steering wheel. Pull on the left side to shift down and pull the right paddle to shift up.

In its higher trim, the Brezza has a TFT multi-information display that can provide a host of information. From your trip and fuel consumption levels to a G-force meter to power and torque output gauges. If you want to change door lock setting or turn off the lock/unlock sound, you can do it from the settings in the MID.

One of the segment-leading features of the new Maruti Brezza is this new head-up display offered in the top trim only. It is housed on top of the instrument cluster’s hood and can be put down when not needed. The HUD can also display a small variety of information such as speed, tachometer and fuel consumption.

The top-spec Brezza also gets a new nine-inch touchscreen for the SmartPlay Pro+ infotainment system. It has a smooth experience but its interface looks rather plain. It still has hot keys along the bottom edge of the unit but no physical controls.

It has been launched with only wired connectivity for Android Auto and Apple CarPlay but the infotainment is capable of wireless connectivity as well, perhaps as a later update.

The Brezza also comes with ambient lighting but only in one colour - blue. You can still however adjust the brightness levels or simply toggle it on or off.

Another highlight feature of the top-spec 2022 Maruti Brezza is its 360-degree surround view camera that you can see on the central display. There are other viewing angles as well when you put the car into reverse. While not great, these cameras still offer a decent resolution and perhaps the best in the segment.

Maruti has also given the climate control a premium appeal and thankfully retained physical controls for the same. Instead of dials or knobs, it has toggle switches to adjust the temperature and fan speed with a digitised display in the middle for the relevant information.

Under the climate controls you’ll find a small storage area, which in the top trim also has a wireless charging pad that can easily fit almost any smartphone. You can also switch off the wireless charging feature if not required.

In the central console tunnel between the front seats, you have two differently sized cupholders that can fit a travel mug and a water bottle. You also have a small but sliding centre armrest with more storage underneath.

The glovebox is cooled and can easily fit a water bottle along with some vehicle documents.

The Brezza is the first Maruti Suzuki model to feature a sunroof. It adds to the premiumness of the car while the extra light in the cabin helps make it feel roomier which is handy on long journeys.

The Brezza does not get a power adjustable driver seat but it has the adjustment for height, recline and sliding.

There are a lot of controls to the right of the steering wheel and below the AC vent. While most of the button slots are filled with dummies, this is where you’ll find the engine start-stop button, and controls for the HUD, auto idle start-stop, traction control, 360-degree camera view and headlight level adjustment.

In the front doors, you have a dedicated space carved out for a bottle and some more room for miscellaneous small items.

Moving to the back seats, the door opens nice and wide for easy access. The rear bench has an accommodating seat base that can fit three adults and offers sufficient legroom as well.

There is no headrest or three-point seatbelt for the middle seat but you do get a fold out centre armrest. It has cup holders that can just about fit a travel mug but not a bottle.

The tall headrests of the front seats do obstruct the view of the rear passengers and the single-pane sunroof is so far forward, its benefit for the rear occupants feels limited.

For added practicality, the driver seatback has a small luggage hook with a load capacity of upto four kilograms.

The Brezza also comes with rear AC vents with blower controls. Under the vents you get two USB charge ports - the left one is a Type-A while the right one is a Type-C.

The rear doors also have a space carved out for a bottle but nothing else.

Lastly, we have the Maruti Brezza’s boot which does come with a rear parcel shelf. Its claimed luggage capacity stands at 328 litres. The high boot floor makes it easier to load and unload but reduces its ability to house multiple, large suitcases in comparison to segment rivals.

Continuing the premium experience, the Brezza’s boot floor that houses the full-size 16-inch spare wheel is designed to slide into grooves that can hold it up in place for easier access.

The benefit of the high boot floor is that when you have the rear seats folded down, you get an entirely flat floor to make it easier to load larger items in the back.

The Maruti Brezza sub-compact SUV continues to be offered with a single petrol engine. The new K15C unit produces 103PS and 137Nm and offers improved fuel economy over the previous version.

It still comes with a five-speed manual as standard. The Brezza has a claimed economy of 19.18kmpl with this transmission.

But the updated powertrain now gets a six-speed torque converter automatic to replace the old Vitara Brezza’s dated four-speed auto. Not only does it offer a smoother drive, it also has a higher claimed fuel efficiency of 20.15kmpl.

The powertrain is relaxed and offers good useability in different traffic conditions but lacks any excitement and high-speed overtakes require a bit of planning.

Maruti’s new-gen subcompact SUV offers a good balance of ride and handling as well. It stays fairly composed over most undulations. The added weight could be a contributing factor to the car’s stability at highway speeds.