The Maruti Suzuki Brezza drops Vitara from its name and picks up a techier formula. Is it one that still makes sense for you? 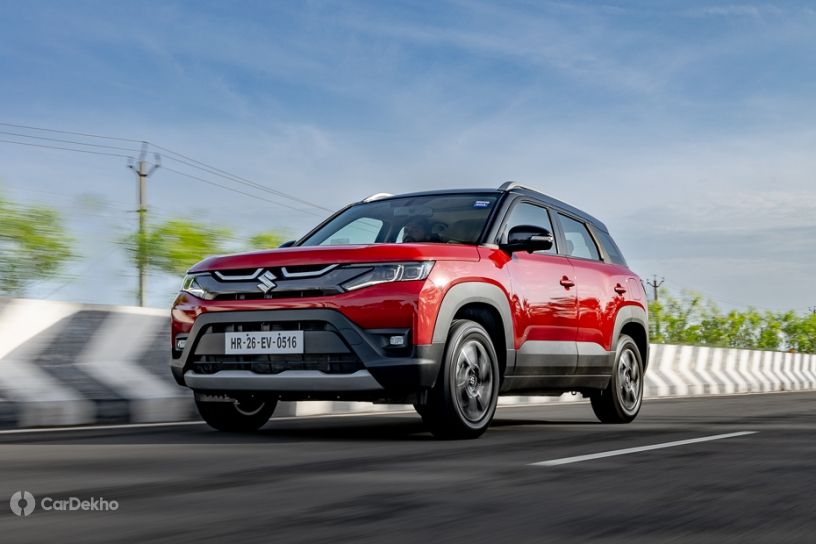 Maruti Suzuki didn’t make the most explosive entry into the sub-compact SUV space. Sure, the Vitara Brezza was one of India’s highest selling cars but it wasn’t because it did something radically different. It had just the right amount of features, looked decent enough to be accepted by everyone in the family, and offered just about enough performance.

It’s a formula that just makes sense and 7.5 lakh buyers since 2016 agree. But with tougher competition now available, it was time to change. Here’s how the experience is with the new and techier Brezza.

Balanced, one word that sums up the new Brezza’s design. Some may find it a little polarizing, considering how neutral the previous version’s look was, but the appeal is largely universal. The dimensions haven’t changed either and while it may be an all-new Brezza, it is still based on the same TECT platform as before.

A key element of the new design is the focus on making the car look wider, especially when viewed from the front or rear. The new nose is flatter, the new grille has more detailing to it and while the L and V variants get halogen projector headlights as before, the Z and Z+ get new LED projectors. They’re garnished by new LED DRLs (Z/Z+) and are accompanied by LED fog lights (Z+).

Towards the side, you’ll spot a new set of 16-inch diamond-cut alloy wheels and 2x more servings of body cladding vs the previous car. It’s the rear that’s the best angle of the new Brezza for us. The tail lights make the car look wider and even have a larger, more distinct light signature inside.

The interior layout itself is different as well with a new dashboard, new steering wheel and new fabric inserts on the door pads. In the Z/Z+ variants, the 2022 Brezza gets a two-tone chocolate brown and black interior which looks nice and bits like the dashtop and new AC console feel more premium.

However, broadly, the interior quality sets no benchmarks. The crash pad plastics are scratchy, the glovebox was rattling on both our test cars and even the sunroof shade didn't fit properly. Considering how the Brezza is now one of the most expensive cars in its segment, the cabin should’ve been richer. Sadly, as it stands, compared to something like the Kia Sonet, this does feel lacking.

The highlight of the new Brezza is its features and technology package. New features include a 9-inch SmartPlay Pro+ touchscreen infotainment system that supports Android Auto and Apple Carplay*. The screen’s layout is data heavy but very easy to navigate through, with large fonts and widget sizes. The displayed data can also be flipped around as per your preference and the system’s very responsive to use.

*While the system is capable of supporting wireless Android Auto/Apple CarPlay, it isn’t currently enabled.

Like the Baleno, the Brezza also gets a heads-up display which gives you data like a digital speedometer, tachometer, gear indicator, cruise control display and car alerts such as the door ajar warning.

The Brezza’s appreciable fundamentals have been retained and improved upon. With a 6ft tall driver, there’s still plenty of knee room to spare and headroom is enough for someone even taller than that. It was always a good 5-seater for users of an average build and is even better now, thanks to a rear backrest that’s wider.

Back seat users also get more amenities than before. Both seatbacks have pockets, there’s a rear armrest with two cup holders, rear AC vents, two adjustable rear headrests (middle occupant doesn’t get one at all) and two USB fast chargers (type A + type C).

The door pockets can accommodate 1-litre bottles and a few sundry items, the glovebox is cooled in the Z+ variant and can hold car documents, wet wipes and any medication you need to keep cool as well. There’s also storage space underneath the front armrest but this sliding armrest is only offered with the top-spec Z+ variant.

While the features list is strong, we’re also glad to report that the execution is right. The parking camera, for example, gets dynamic guidelines and the resolution is sharp as well.

At 328 litres, the boot isn’t particularly large on paper but the squared-off shape helps accommodate large suitcases as well. There are also recesses to the side to store smaller items, such as a cleaning cloth or tyre repair kit (most tyre inflators won’t fit here). For added room, the rear seat splits and folds (60:40) almost completely flat, once you flip the seat base up and drop the backrest down.

The Maruti Suzuki Brezza will only be available with a petrol engine. The motor in question is a 1.5-litre, four-cylinder naturally-aspirated unit (K15C) assisted by a mild-hybrid system. At 103PS and 137Nm, its on-paper output is par for the course and is reflected in the real-world performance as well.

This engine is very smooth to use and builds performance progressively as the revs rise. It’ll get up to speeds of 60-80kmph with ease and is a relaxed cruiser as well. Courtesy the mild-hybrid assist, the crawl speed performance is strong as well, making it convenient for driving in city traffic. However, compared to its turbo-petrol competition, there’s nothing exciting about the performance of this engine. High-speed overtakes will need some planning, and usually a downshift as well, especially if you’re driving with passengers.

Aside from the standard 5-speed manual transmission, the Brezza now gets a 6-speed automatic with paddle-shifters. This transmission is very intuitive to use and feels at home ambling around in city traffic or on the open highway. Interestingly, it has a tendency to hold onto gears for longer than you would in the manual, and doesn’t feel lacking for responsiveness either. It isn’t as quick as a twin-clutch/DCT, but doesn’t give you reason to complain. It’ll also drop two gears at a time if needed and controls shift-shock well while doing it.

The paddle-shifters are the only manual control you have, as there’s no manual/tiptronic-style shifting with the gear lever. Downshift with the paddle, get heavy on the throttle and it’ll stay in gear. You can also slot the lever into manual mode, where the transmission will never upshift automatically, which will come in handy especially on uphill sections.

At roughly 20kmpl for both transmissions, the ARAI-rated fuel efficiency figures are impressive. On the highway, the automatic should prove to be notably lighter on the pocket. At 100kmph, the manual sits at nearly 3000rpm in top gear, which is on the higher side, while the automatic is just under 2000rpm. If you’re looking at the better all-rounder for city and inter-city drives, we’d tilt towards the automatic.

The Brezza offers a great balance of ride comfort and handling. Cabin occupants are well-insulated from even sharper bumps, the car maintains composure even over undulating roads and it feels steady at over 100kmph as well. While the Vitara Brezza’s ride was initially set up on the sportier/stiffer side, it is now more balanced. The Brezza also offers a little more noise insulation than before though you can pick up on some wind noise at speeds of 80-100kmph.

The 2022 Maruti Suzuki Brezza is available in four variants: LXi, VXi, ZXi and ZXi+. Save for the base LXi, every variant is available with an optional automatic transmission. For a detailed understanding of which variant is right for you and why, click here.

The Maruti Suzuki Brezza maintains the strong fundamentals of space, practicality and comfort but now gets a stronger tech package, more safety features and a better automatic transmission. While the packaging is at its strongest in the Z and Z+ variants, it delivers decent value in the L and V as well. But when you factor in the higher price, especially of the top variants, the Brezza should’ve offered superior interior quality and more exciting drive options as well, especially when its competitors deliver turbo-petrols and diesels for less money.

But overall, the Brezza is now a car that’ll keep both the head-first adults and heart-first kids in the family satisfied.