BMW's new 'China only' sedan deserves a spot in the Indian lineup. Here's why.

After having the business end of the luxury car segments done right, BMW has now set its eye on the blooming entry level space. The 1 Series sedan first broke cover back in July, and has now made its first official appearance at the 2016 Guangzhou Motor Show in China. 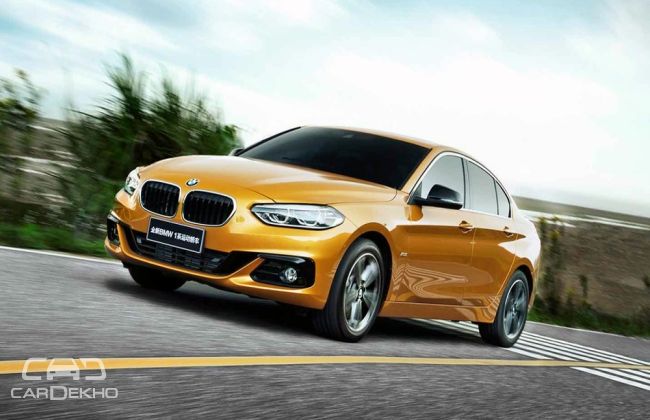 Developed jointly with Brilliance Automotive, the 1 Series leverages a lot of existing technologies, engines and platforms, to put forth a BMW for the masses. Here's why we think the small sedan deserves to be on BMW India's roster:

1. Lacklustre sales of the hatchback

It is rather surprising that BMW's most affordable offering in the country, the 1 Series hatchback, is also among the least selling. First launched in 2013, the hatchback got a midlife makeover last year. Sadly, not even a renewed set of features or redone styling managed to turn the tide for the smallest BMW on sale.

A major reason behind the hatchback not finding homes, was, well… the fact that it was a hatchback! Most buyers couldn't digest the prospect of a hatchback that cost well over Rs 30 lakh on road, and the average feature list did very little to help its case. For a market like ours, that equates money spent with the size and class of the vehicle, a plush hatchback just doesn't cut the mustard. We also take pride in showing off our sedans, for they have always been the perfect 'badi gaadi' (no matter how small they get) and command great bragging rights. An affordable BMW sedan only means....

The Roundel has its own charm with the audience, on par with the three-pointed star and the four rings. The brand itself has always stood for a premium experience with a generous dose of driving pleasure, and we think the 1 Series sedan opens up that promise to a whole new base of clientele. Most importantly, a sizeable chunk of this new audience are likely to tilt in favour of the sedan purely because 'it is a BMW', over other conventional big sedans or SUVs.

The entry-level luxury saloons have the Audi A3 and the Mercedes-Benz CLA slugging it out for the top spot. BMW's German contemporaries have taken separate approaches in building their compact sedan brands. Audi has widened the appeal of the A3 by introducing the Cabrio. On the other hand, Mercedes served the full-fat CLA45 AMG at a delectable price. There's clearly a lot of room for yet another contender, and in a booming auto market like India, this particular segment holds a lot of promise and potential for growth.

The 1 Series sedan is based on the UKL platform that also underpins the new 2 Series Active Tourer as well as the new X1 crossover. Engine options include a 136PS 1.5-litre turbo petrol and a 2.0-litre turbo petrol that can be had in with either 192PS or 231PS on tap. Of course, BMW can also look at equipping it with the 150PS 1.5-litre diesel motor, that currently powers the 118d hatchback. To keep costs in check, the 1 Series sedan can be assembled locally at BMW's Chennai facility, alongside other cars that share its underpinnings.

BMW's plan for expansion in India will only be strengthened further with the 1 Series sedan. On paper, it does seem like a package that holds promise to do well in a market like ours. Your move, BMW India!