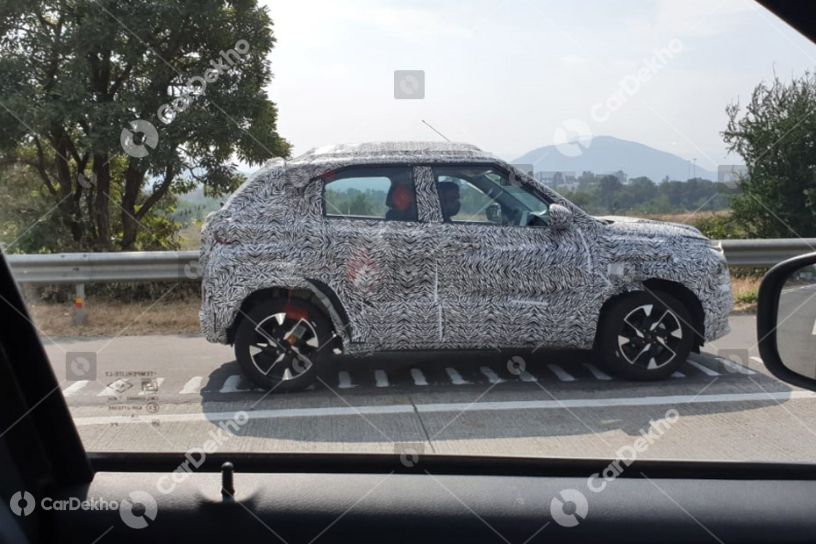 It’s no secret that Tata’s working on a micro SUV to rival the likes of the Maruti Suzuki Ignis and Mahindra KUV100 NXT. Codenamed the HBX, it was presented in its pre-production avatar at Auto Expo 2020 and has since been spied multiple times as it nears production. We’ve now got our hands on a few spy shots of what seems to be a high-spec variant of the HBX.

The HBX draped in camouflage is seen with a new set of four-spoke dual-tone alloy wheels (likely 16-inch units) compared to the previous sightings. These wheels seem to fill the arches quite well even though they are nothing like the off-road wheels used for the pre-production show car. The test mule has the SUV-like boxy stance, same as the concept, with a rear wiper, roof rails, and what seems like an opening for the rear parking camera. It is expected to feature LED units at the front and rear in its top trim.

While the interior of the production-spec model remains a mystery, it could bear resemblance to the concept form. So it’s likely to feature a floating touchscreen infotainment display and semi-digital instrument cluster. Tata is expected to offer the production-spec HBX with features such as cruise control, keyless entry, push button start/stop, and auto AC. Safety could be taken care of by dual front airbags, rear parking sensors, and ABS with EBD.

Tata could offer the HBX as a petrol-only model with Altroz’ 1.2-litre petrol engine (86PS/113Nm). Transmission duties would likely be taken care of by either a 5-speed MT or a 5-speed AMT. Further down the line, an electrified version of the HBX could also make its way to showrooms after the launch of the petrol-powered model.

The HBX will be positioned below the Nexon in Tata’s current lineup and could be priced from Rs 5 lakh onwards. It would also rival the upcoming Hyundai micro SUV which was recently spied in Korea.