The longer-wheelbase Jimny looks near identical to its smaller model, but comes with two additional doors 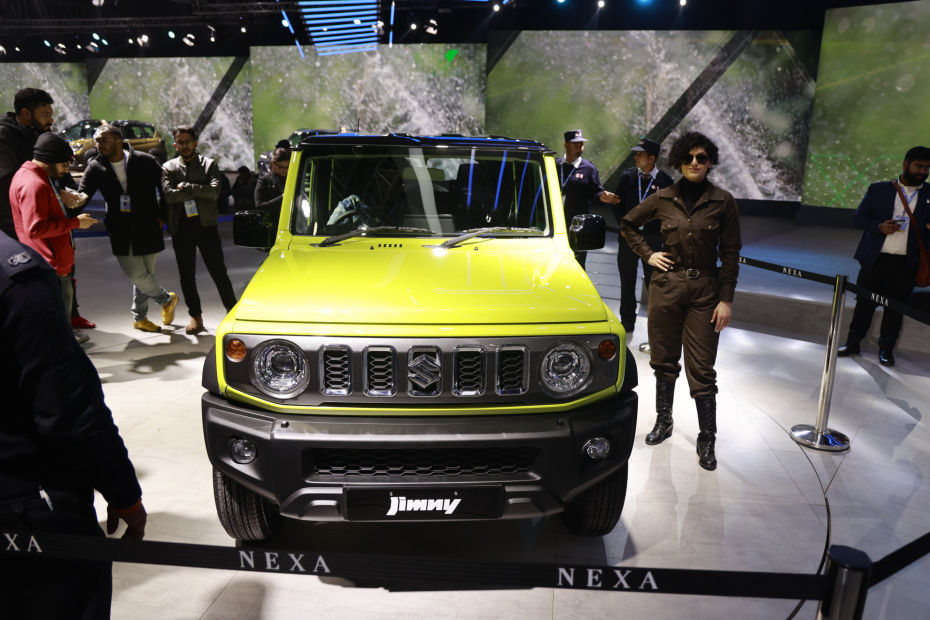 Maruti’s unveilings on the second day of the Auto Expo 2023 was a much-awaited moment for many Indians as it showcased the five-door Jimny for the first time alongside the new crossover called the ‘Fronx.’ Although it looks almost identical to its three-door counterpart, the carmaker has ensured that the elongated Jimny has some distinction over the former.

Let’s explore the exterior and interior of the five-door Jimny in the gallery below:

One glance at the SUV’s front fascia is all it takes to recognise the Jimny, as it still looks nearly identical to its three-door version.

It has carried on with the iconic five-slotted grille with the Suzuki logo in the centre, although Maruti has given it chrome inserts to set it apart from the smaller Jimny’s all-black grille (now making it look more like a Hummer).

The Jimny also features circular headlight clusters (LED projector units) housing a small LED DRL placed inside and round indicator lights located close to the front fenders. Its front bumper has a rugged appeal with mesh over the air dam housing the fog lamps.

Even the five-door Jimny gets headlight washers, a segment-first in India.

Here’s where you notice the biggest change between the shorter- and longer-wheelbase Jimny. The ground clearance remains unchanged at 210mm.

Maruti Suzuki has increased the length of the Jimny which is evident from the increased wheelbase. It also comes with two extra doors and a rear quarter glass panel that’s missing on its smaller version. That said, it still gets the kink in the front windowline, front fender-mounted turn indicators and the squarish ORVM (outside rearview mirror) units as seen on the three-door model.

The five-door Jimny comes with squared-off wheel arches that accommodate 15-inch alloy wheels. Maruti Suzuki has opted to offer the same wheel design on the longer-wheelbase Jimny as its smaller iteration.

You might struggle to tell the five-door model’s rear apart from that of the three-door Jimny, as both have almost identical appearances including the tailgate-mounted spare wheel.

That said, the five-door does get the ‘Jimny’ badging in place of the ‘Suzuki’ moniker on the bottom left side of the tailgate, while the ‘AllGrip’ name tag has been carried on as is. It even gets the roof-mounted washer, while the wiper is hidden behind the spare wheel.

The India-spec Jimny also gets a sensor for accessing the tailgate of the SUV which is missing on the three-door model.

The taillights are still placed low in the rear bumper along with the rear parking sensors and the tow hooks.

It gets 208 litres of boot space with the second row up. If you were to fold it down, it translates to a generous 332 litres of luggage storage area.

Maruti hasn’t made many alterations to the three-door Jimny’s interior design for the longer-wheelbase model. It continues with the all-black cabin theme with brushed silver accents and the grab handle on the co-driver side of the dashboard.

The India-spec SUV comes with the exact same leather-wrapped (in top-spec Alpha trim) steering wheel as available on the Jimny sold in the international markets.

Even the basic analogue instrument cluster is a straight lift from the three-door Jimny that houses a small, vertical coloured MID in the centre.

One major change is that the Alpha trim of the India-spec Jimny is equipped with a nine-inch touchscreen unit that’s offered with the new Baleno and Brezza. But if you pick the entry-level Zeta trim, you will get a smaller seven-inch display. Although, good news is irrespective of the variant that you pick, the SUV gets wireless Android Auto and Apple CarPlay as standard.

The climate controls are the same with three dials and the central one featuring a digital temperature readout. Below that, you get the switches for the power windows lock and driver-side window auto up/down, traction control, hill-descent control, USB and 12V sockets, and a cubby hole.

Then there are the two gear levers: either a five-speed manual or a four-speed automatic stick, and a 4x4 low-range transfer case. That extra shifter is part of what Maruti calls the AllGrip Pro in the Jimny’s feature list.

The SUV gets fabric seats while its front row can be folded down flat (and are reclinable as well), which proves to be handy when taking it for camping or on adventures.

It’s in the second row, though, where the five-door Jimny has the maximum advantage over its three-door counterpart. Occupants here get increased legroom thanks to the extended wheelbase. However, even with the extra doors and extra space the Jimny is officially a four seater and there’s no armrest, rear AC vents or even USB sockets on offer.

Related: Which Of These 7 Vibrant Jimny Colours Would You Pick?

The India-spec Jimny’s bookings are now underway, while its launch will take place by March. So stay tuned to CarDekho to find our in-depth review of the Maruti SUV.

what may be the approx. price of m jiimmy