Maserati To Launch Its First Ever Midsize SUV By 2022

The unnamed SUV will be positioned below the Levante 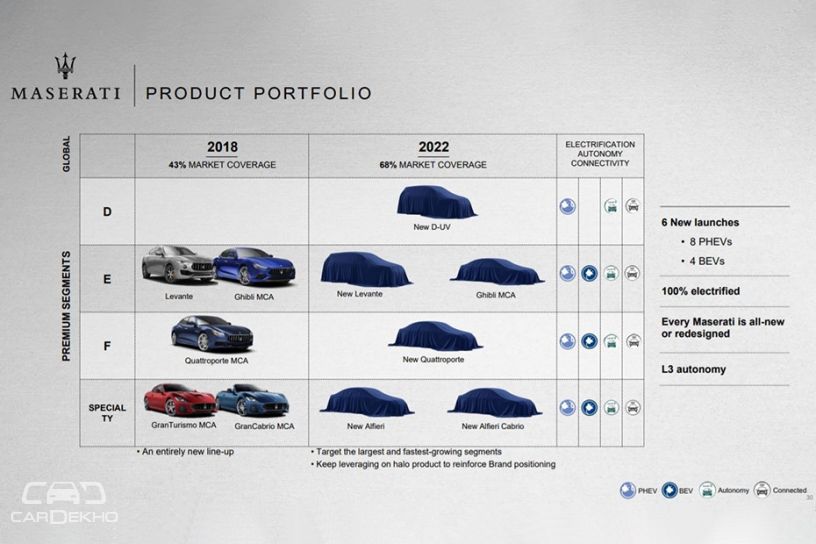 Maserati has confirmed that it will launch a new midsize SUV by 2022. Aimed to take on the likes of the Porsche Macan, Jaguar I-Pace and the BMW X4 (launching in 2019), the upcoming product will be the second SUV by the Italian carmaker after the Levante, which was launched in 2017.

Maserati is yet to reveal the name of the upcoming SUV but has confirmed that it will feature level 3 autonomous driving and will also be offered in a plug-in hybrid avatar. Other facts known about the SUV are that it will be based on a lightweight platform and will have 50:50 weight distribution for better ride and handling characteristics. Maserati claims that the unnamed SUV will also have a best-in-class power-to-weight ratio.

The midsize SUV is expected to share its platform with the Alfa Romeo Giulia sedan and the Stelvio SUV, both of which are underpinned by the lightweight Giorgio platform.

As the Italian carmaker is aiming to double its market share by 2022, it will also launch the updated Levante along with the new midsize SUV. It will be based on a new modular platform, will have 50:50 weight distribution and will get a plug-in hybrid version like its smaller sibling. The new Levante will also get a fully electric version with 3-motor AWD system with torque vectoring, coupled to an 800V battery technology. Thanks to this, Maserati claims that the all-electric Levante will have a long range, quick charging times and 50 per cent more power than its conventionally powered counterpart.

Apart from the new midsize SUV and the renewed Levante, Maserati has also promised to launch the Ghibli and Quattroporte replacements and the new Alfieri twins: Coupe and Cabriolet (replacing Gran Turismo and Gran Cabrio), by 2022. All these new products should help Maserati to reach its annual global sales target of 100,000 units by 2022. Currently, Maserati sells about 50,000 cars a year, globally.

We expect Maserati to launch all these cars in India as well, soon after their global launch. They will be imported to India as CBUs like Maserati’s current lineup which includes the Levante SUV, Ghibli, Quattroporte, Gran Turismo and the Gran Cabrio.