The all-new XC40 is Volvo’s answer to the Audi Q3, the BMW X1, and the Mercedes-Benz GLA 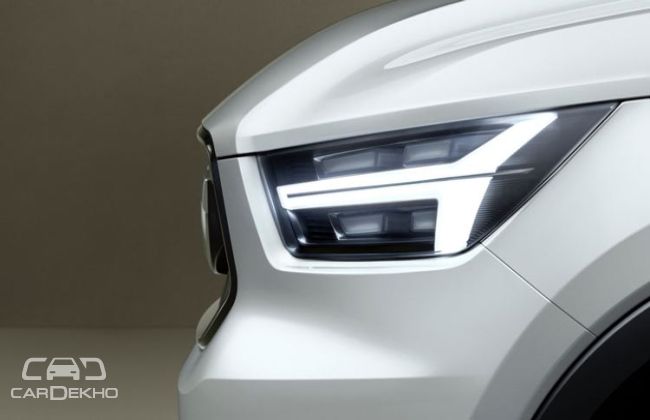 Volvo has teased its upcoming model on Snapchat, which will be revealed in concept forms next-Wednesday in Gothenburg, Sweden. The vehicle is said to be the new ‘series 40’ model which the Swedish automaker has been planning for a while. After the acquisition by Chinese automobile firm Geely Holding in 2010, Volvo has been on a revamping spree. It went for a top-down approach and the renaissance started with the second-generation XC90 (2014), and then the new S90 (2015). Now it is the turn of the entry-level models – the 40-series.

The company hinted last year at the debut of its flagship S90 sedan that it wanted to make the 40 series clan grow. Though we will get a clear picture next week, the teased pictures are believed to be the much-anticipated XC40 crossover. And, like the S90, the new model is also India bound. Last year, the automaker revealed several things – such as the platform and mechanicals – about the upcoming 40-series cars.

Volvo last year revealed its new compact modular architecture (CMA) which will underpin its entry-level models such as the teased XC40 and the V40. In the near future, Volvo will just have two platforms – CMA and the SPA (Scalable product architecture). The latter made its debut with the XC90 and also underpins the new S90. With the new SPA platform, mark II XC90 has shed close to 300 kilos. We expect the new CMA-based vehicles to be relatively light weight.

Volvo highlighted that the CMA will have the benefits of the larger SPA platform and can share powertrains (both conventional and new plug-in hybrid variants), infotainment and safety systems.

Besides the new DriveE engines, the new 40-series models will also have the T5 – Twin Engine (plug-in hybrid), which Volvo introduced last year. The XC90 also offers a similar range-topping plug-in hybrid – the T8 Twin Engine variant. On similar lines, Volvo said that the T5 Twin Engine in CMA platform cars will have close to 250 horses in FWD(front wheel drive) setup, clocking 0–100 kmph in nearly 6.5 seconds. The electric driving range will be more than fifty kilometres and the car will have a CO2 emission less than 49 g/km.

Volvo
VIEW ALL
R
Published by
Was this article helpful ?