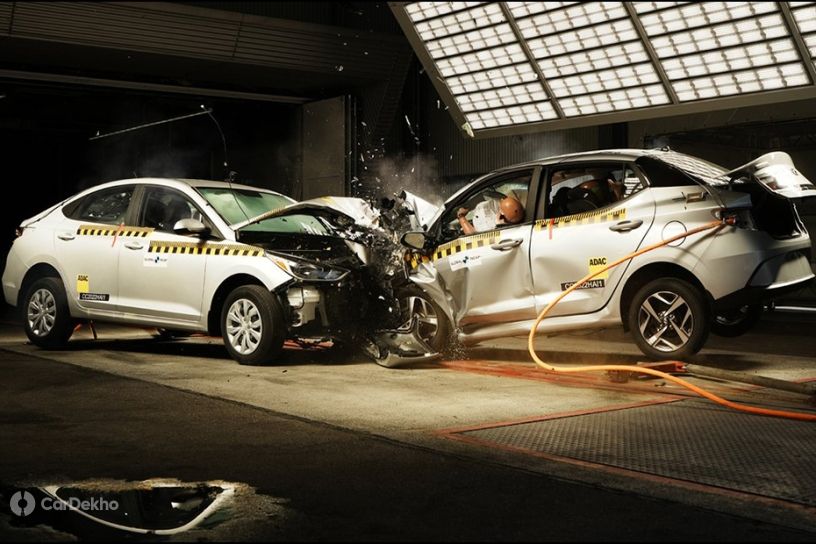 All major carmakers, over the years, work towards improving their models, with a key focus on safety. Yet, it’s become a common practice among manufacturers to provide cars with a beefier safety kit in markets having stringent safety standards while compromising on the same in unregulated markets. This has been highlighted once again in a new ‘Car2Car’ crash test performed by Global NCAP.

Models Tested And Markets They Are Sold In

In the new test, the GNCAP (as it’s popularly called) acted out a head-on collision between a made-in-India Hyundai Aura (sold in Latin American markets as the Grand i10) and a made-in-Mexico Hyundai Verna (sold in the American region as the Accent). Do note that they are Hyundai’s most affordable sedan offerings in their respective markets.

Safety Equipment On Board And Their Performance

It’s important to note that the American-spec Verna comes with six airbags and electronic stability control (ESC) as standard, whereas the Latin American Aura gets only dual front airbags. This resulted in the Verna offering ‘good’ protection to its driver and its structure was rated ‘stable’. On the other hand, the Aura’s structure was deemed ‘unstable’ while offering ‘poor’ protection to its driver. The Hyundai sold in Mexico (Aura) would be rated as a zero star car by Latin NCAP whereas the Verna had already flunked in the organisation’s crash test conducted back in 2021.

Watch the video to see the impact caused by the crash on both cars:

What Did Latin NCAP Have To Say About This Car2Car Crash Test Result?

Latin NCAP’s Secretary General, Alejandro Furas, said, “This test is a wakeup call to consumers, regulators, and car manufacturers. All consumers, no matter where they live, have the right to expect the same standard of safety in their cars. The cross border safety gap should no longer exist. We call for manufacturers to stop the double standard strategies in the world.”

In a recent event held in Delhi, India’s Minister of Road Transport and Highways, Nitin Gadkari, called out some carmakers for compromising the safety offered by their India-spec models compared to their much safer international counterparts. His ministry has been proactively working towards making cars sold in India safer, firstly by mandating standard fitment of six airbags and secondly by announcing the introduction of the Bharat NCAP crash tests w.e.f April 2023.

3 out of 4 found this helpful