While the carmaker ceased its production in March this year, the MPV has now been taken off the official website altogether 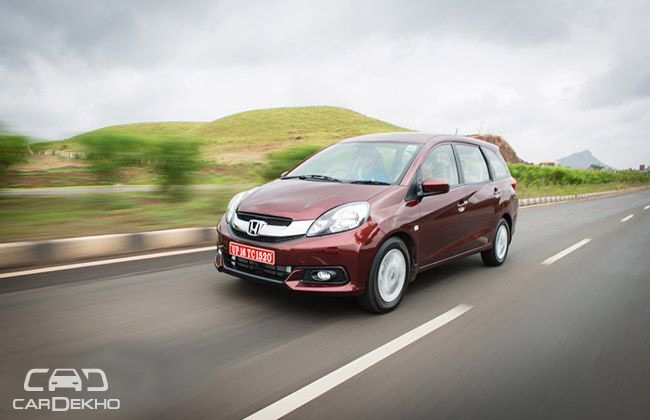 Japanese carmaker Honda has finally discontinued the Mobilio. Launched in July 2014, the people carrier failed to leave its mark in the market. In fact, it didn’t even complete two years in Honda’s Indian portfolio. In March this year, the automaker confirmed that it has ceased production of the seven-seat MPV. And finally, the car has now been taken down from the manufacturer’s official website altogether.

Although an official word is still awaited from Honda, dealers across the country aren’t taking any bookings for the Mobilio. Some might have old stock available, latest of which was manufactured in 2016. Honda’s GST (Goods and Service Tax) pricelist that came out earlier has also hinted towards the same. Only seven out of the nine cars were listed. While the Mobilio wasn’t included, Honda is still contemplating about the prices for the Accord Hybrid, which as per the new tax regime, is destined to become more expensive.

Based on the same platform as the Honda Brio, the Mobilio never really managed to capture the imagination of consumers. Built primarily to take on the Maruti Suzuki Ertiga, the Mobilio was offered with the same diesel and petrol engines as the Honda City. There was also a diesel RS variant on offer, which came with additional goodies like sporty front and rear bumpers, side skirts, rear spoiler and projector headlamps.

This year, Honda has already begun updating its product lineup with the all-new WR-V and a mid-life update of the its bread-and-butter product - the City. The carmaker is now also passing on the benefits from GST to its potential customers and will hope to get its sales numbers moving in the correct direction.