The Honda MPV has been reeling with poor demand and continuously dwindling sales which read zero units last month. 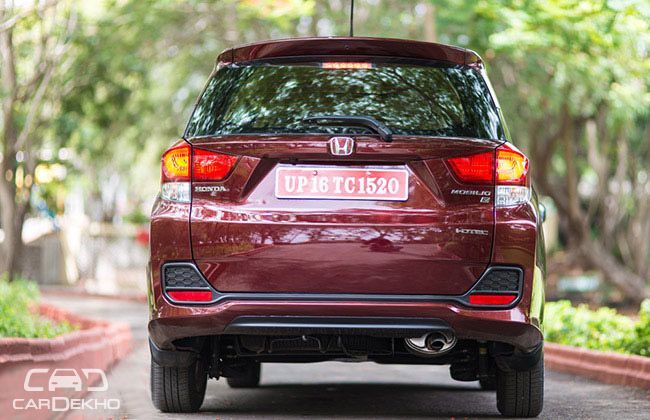 Honda’s attempt at the flourishing MPV segment of India isn’t going too well. Launched in July 2014, the Honda Mobilio hasn’t really been able to push the sales for the carmaker. In fact, not a single unit of the Mobilio was sold last month! As of now, the automaker has stopped the Mobilio’s production to clear the piling backlog. The total sales of the MPV currently stands at a dismal 40,789 units.

Moreover, in a couple of months’ time, the company will decide whether it will bring the updated version of the MPV to the country or not. The decision to bring in the new Mobilio (currently sold in Thailand) majorly depends on the amount of investment it incurs to go safer; courtesy the upcoming stricter car safety norms in India.

In an interview with PTI, Honda Cars India’s president and CEO, Yoichiro Ueno, said, "There are new safety regulations coming from this year. The current Mobilio does not conform to regulations. So in order to continue to sell the vehicle we need to put in lot of investment or modification of the model."

He further cited that the poor sales performance of the car was also being considered. "Maybe we will compare. If the investment is too much and it's too bad and (if) we have to increase the price of the vehicle significantly, in that scenario it will be very difficult to continue (the Mobilio brand)," Ueno said.

Given the mediocre sales, more funds to make it safer and tough competition from the likes of the Maruti Ertiga, Tata Hexa, Toyota Innova Crysta, it’s highly unlikely that Honda will restart its production anytime soon. A discontinuation tag is likely to be announced after a couple of months.

The Indian government is tightening the noose on car manufacturers over the safety of their vehicles. And in accordance with the same, all the existing vehicles will have to comply to full frontal impact and offset frontal impact by October 2019, whereas all the new yet-to-launch models have a timeline till October this year. However, for pedestrian safety, the existing vehicles have time till October 2020, while the new ones have a deadline of October 2018.

Meanwhile, the Japanese carmaker is foraying in to the compact SUV space with its Honda WRV. Want to know how it drives? Have a look at Honda WRV review.