The last week of 2022 saw a couple of updates for Mahindra SUVs while Toyota revealed the prices of the new Innova Hycross. 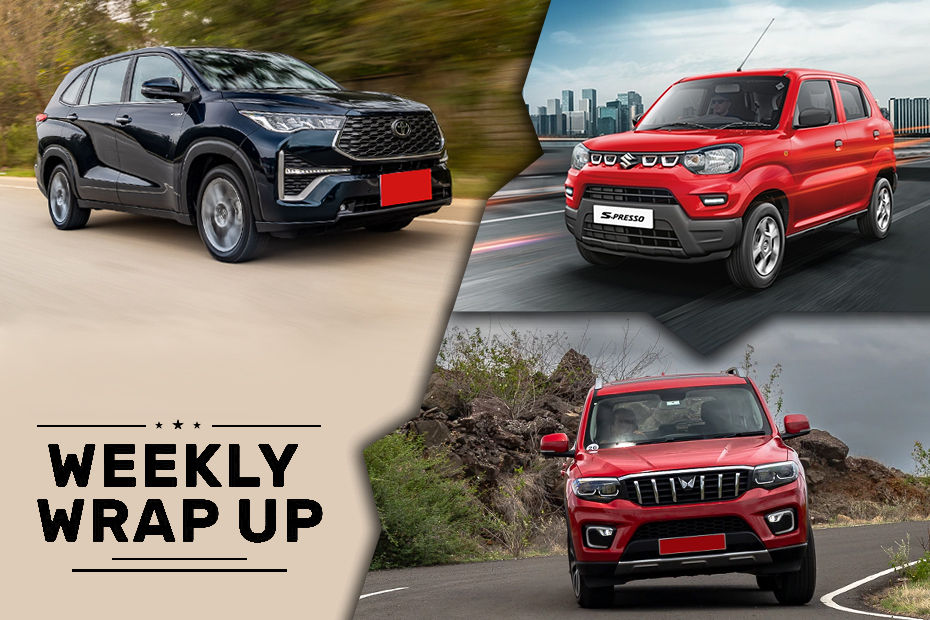 2022 has drawn to a close but not without giving us important automotive updates even in its final week. It was marked with the price announcement from Toyota for the Innova Hycross, variant rejigs for two popular Mahindra and Jeep SUVs and even a set of spy shots of Tata’s popular SUV.

Let’s have a look at the highlights of the week

Shortly after making its debut, the new Toyota Innova Hycross has now been launched in India. With the new generation model, the ‘Innova’ nameplate has got a lot of upgrades, many of which are a first for the MPV, including a first-in-segment strong-hybrid powertrain and ADAS.

With the ‘Xtra’ moniker, the S-Presso has become more SUV-ish with the styling kit offered as accessories for both exterior and the interior. The S-Presso 'Xtra' is a dealer-level fitting of styling elements, similar to what we've seen with the Swift special edition kit.

2WD Mahindra Thar To Get A Smaller Diesel Engine

While the Scorpio N got a five-star safety rating in Global NCAP crash testing, Mahindra has apparently eliminated hill assist and ESC (electronic stability control) from lower variants of the SUV. Instead, Mahindra is now charging an additional premium for these safety features.

Jeep Sickles Out Selected Trims of the Compass

Jeep has removed the petrol-manual variant of the Compass SUV from its India lineup. The 1.4-litre turbo petrol (with 163PS and 250Nm) is now only available with a seven-speed DCT. The manual variants, however, are now only offered with the 2-litre diesel engine, which produces 170PS and 350Nm.

2023 Tata Safari Spied With ADAS For The First Time

The latest spy shots of the facelifted Tata Safari have surfaced online, which was spotted testing with camouflage sporting the ADAS radar for the first time. The facelifted Safari will not carry any mechanical changes apart from the addition of a few features. It is expected to be showcased at the 2023 Auto Expo.