Suzuki Jimny: Here’s How The Tiny 4x4 Has Evolved

The long overdue replacement to the third-gen Jimny is almost here. Now if only Maruti could replace the ageing Gypsy with it... 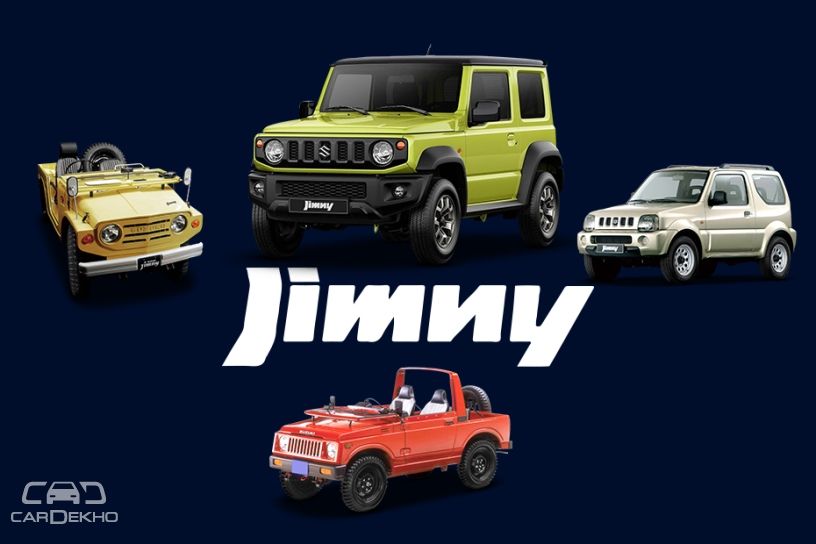 Back in December ‘85, Maruti launched the second-gen Suzuki Jimny in the Indian market, albeit with a different name - the Gypsy. Now, after nearly 33 years, the Gypsy continues to soldier on, that too without any major changes or updates.

As the world waits for the full reveal of the all-new Jimny in July 2018, many off-road enthusiasts in the country have got their hopes up since Maruti Suzuki is likely to replace the ageing Gypsy with the all-new SUV. So, we thought we’d take a moment to see how the Jimny has evolved over the years.

The Jimny’s roots can be traced back to the summer of 1970 when Suzuki introduced the LJ in its home market, Japan.

The LJ carried the ‘Jimny’ label and was powered by a humble 360cc, longitudinally placed two-stroke petrol engine that put out just 25PS of power. Thankfully, the first iteration of the SUV, the LJ10, had a kerb weight of just 600kg!

Suzuki continued producing a range of LJ SUVs until 1980.

These SUVs were as capable as other off-roaders from that era thanks to their lightweight construction, ladder frame-based body and small petrol engines with a low range 4x4 drivetrain. Future generations of the Jimny built on this recipe and, over the years, have enjoyed a cult status among off-road enthusiasts.

Suzuki discontinued the LJ series in 1981 and followed it up with the launch of the SJ, a model that most people across the world recognise even today. While the LJ had a Jeep-like rugged appearance, the SJ was a bit softer and had an urban appeal to it. That said, it lost none of its off-road prowess and was as capable as the LJs before it.

The SJ series SUVs were known by several names across the world. It was called the ‘Samurai’ in North America and the ‘Gypsy’ here in India. Other names included Santana, Katana and Sierra, among others. Initially, it was powered by a 1000cc 45PS petrol engine. However, Suzuki plonked a more powerful 1300cc motor that produced 67PS later. At that time, the 1300cc petrol motor was the largest engine produced by Suzuki. It also happened to be the first Jimny to feature a 5-speed manual transmission.

In India, the Gypsy was launched with the 1000cc engine that also powered the Maruti 1000. Later, Maruti introduced a refreshed version called the Gypsy King, which features the 1300cc engine from the refreshed version of the 1000, which was renamed the Esteem. Although Suzuki discontinued the SJ/Samurai/Gypsy in 1997, Maruti Suzuki still continues to sell the model in India.

Meanwhile, the rest of the world had moved on to the third-gen Jimny, which was introduced in 1998. The third generation SUV gave up the previous alphanumeric nomenclature for ‘Jimny’. It had more features than any of the previous iterations, chief among which were the introduction of dual-front airbags and anti-lock brakes (ABS).

The third-gen Jimny also featured several mechanical updates such as shift-on-fly 4x4 system and a more sophisticated coil spring setup instead of the SJ’s leaf springs.

The third-gen model continued to be powered by the same 1.3-litre motor as before. However, Suzuki did introduce a diesel variant for a brief period in the European market.

This version was powered by Renault’s 1.5-litre dCi engine that powers the Duster and Captur, among others, in India.

Although the second-gen version of the SUV has been on sale in India for nearly 33 years, it is the third-gen Jimny that has the distinction of being the best-selling Jimny in the world. This version was in continuous production for well over two decades. In fact, the Jimny nameplate will celebrate its 50-year anniversary a couple of years from now!

Now, Suzuki has overhauled the Jimny yet again. The fourth-gen model is boxier than before. In fact, the styling of the new Jimny seems to have been inspired by the LJ and SJ versions of the Jimny. The new model is expected to be powered by an all-new 1.5-litre petrol engine. And if Maruti decided to roll out the new version in India, it could also feature Suzuki’s indigenously-developed 1.5-litre diesel engine along with the 1.2-litre petrol engine.

The fourth-gen model is also going to be the most feature loaded Jimny ever. It will pack goodies such as Android Auto and Apple CarPlay-compatible infotainment system, auto climate control, LED headlamps, push-button start-stop, multiple airbags, among others. Here’s what we know about the latest generation of the SUV so far: 2019 Suzuki Jimny - Official Images Of Gypsy Successor Revealed

You want the new Jimny badly, don’t you? So do we! And we don’t see any point in Maruti Suzuki holding back the fourth-gen SUV from the Indian market, especially since the old workhorse, the Gypsy, will have to be discontinued soon as it won’t be feasible to modify it to pass the stringent crash test norms that are set to be implemented in the country in 2019. The new Jimny, if greenlighted, is expected to be priced around Rs 7 lakh.

Maruti, we hope you are listening. If you need a little bit more encouragement, check this out: The New Suzuki Jimny Has Everything That Should Make The Mahindra Thar Worry