Buying a sedan or an SUV is largely a choice of one’s taste. But look at it logically and certain factors favour one over the other 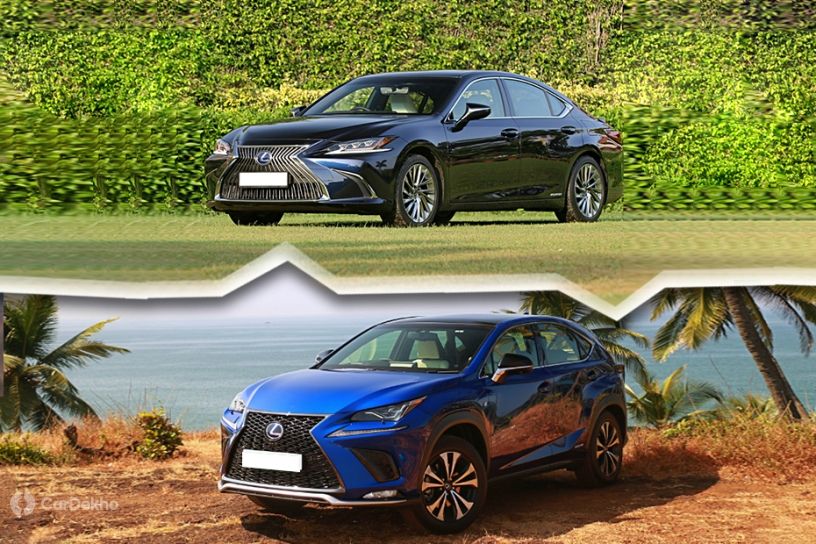 Lexus' range of mid-size luxury cars in the country includes two very attractive options. Options which are not just enjoyed by the eyes of the beholder but also kinder to the environment by packing hybrid powertrains. We are talking about the ES 300h and the NX 300h. In this article we will be comparing the ES 300h Luxury with the NX 300h F Sport to see which one makes more sense when the decision is to be made purely by the brain.

When you buy a luxury car, you surely want people to take notice. Luckily, in that one aspect, you can't go wrong with either one of these. Both the ES and the NX are attention magnets. Especially because of the massive grille which is finished in metallic chrome on the sedan, whereas gets an all-black treatment on the F Sport variant of the SUV. This helps the ES look elegant and gives the NX a sportier stance. The lights on both the vehicles are sharp and sleek, giving them tonnes of attitude. In terms of wheels, both get 18-inch rims but the ES is wrapped in 235/45 R18 rubber whereas the NX is wrapped in 225/60 R18 rubber.

In terms of size, the sedan measures 4,915mm, 1,820mm, 1,450mm and 2,870mm in length, width, height and wheelbase, respectively. The SUV, on the other hand, measures 4,640mm, 1,845mm, 1,645mm and 2,660mm, respectively. As you can see, the sedan is considerably longer than the SUV and gets a much longer wheelbase as well. And with lower ground clearance, it's the sedan which looks much better in terms of proportions on the road. The NX SUV looks imposing on the road as well but isn't as easy on the eyes as the sedan.

A luxury car, a Lexus no less, will pack a lot of features. But it's the ES sedan which takes top trumps in most departments. While both the cars get adjustable driver seats, it's 8-way in the NX while 14-way in the ES. Front seats of the ES are heated and ventilated, whereas the NX F Sport only gets heated front seats. However, the Luxury variant of the SUV gets ventilation for the front, and heating and power recline for the rear seats as well. The is not far behind as it also gets power reclining rear seats. And if you like gazing at the stars, the NX gets a fixed glass roof, whereas the ES only gets a sunroof.

Both cars also get a wireless charger, colour heads-up display, rain-sensing wipers and automatic climate control. But where the ES gets an auto 3-zone air conditioner with humidity sensor, the NX only gets a dual-zone climate control. The ES also gets sunshades for rear windows and rear quarter window and also a power sunshade for the rear windscreen. Also, in terms of infotainment the NS gets a 12.3inch touchscreen and a Mark Levinson premium surround sound system with 17 speakers. The NX gets a smaller touchscreen and a 14-speaker Mark Levinson premium audio system.

Given that both these cars are meant to be driven on well-paved tarmac networks, the higher ground clearance of the NX is not an outright advantage. However, it does offer peace of mind over the nasty speed breakers that our cities often surprise us with. And even in terms of boot space, both are almost equally matched, with the ES offering 454 litres and the NX offering 475 litres.

Both the ES and the NX are powered by a 2.5-litre petrol engine assisted by a hybrid system. The 2494cc engine in the ES makes 178PS of power at 5700rpm and 213Nm of torque at 4500rpm. This allows it to accelerate from 0-100kmph in 8.5 seconds, and achieve a top speed of 180kmph. The same engine in the NX makes 197PS/210Nm, helping the SUV reach 100kmpg in 9.2 seconds. Both cars come mated to an e-CVT. So if you are looking for a sporty drive, it would again have to be the ES with its faster acceleration.

Prices for the ES 300h start from Rs 51.9 lakh. The variant here is priced at Rs 56.95 lakh, ex-showroom. The NX SUV, on the other hand, starts from Rs 54.9 lakh and goes up to Rs 60.6 lakh for the F Sport variant. Given that the sedan packs more features, is equally practical in terms of space and even more in terms seating space, looks more proportionate, is the quicker car of the two and is also less expensive, it's a no brainer that the ES 300h is the more logical pick of the two. However, if you are looking for a dominating road presence, or need the extra ground clearance, the NX 300h is an easy pick as well.