Honda Has Now Manufactured A Whopping 2 Million Cars In India

The Honda City rolled out from the company's Tapukara production facility in Rajasthan, became the 2 millionth unit produced by the company. 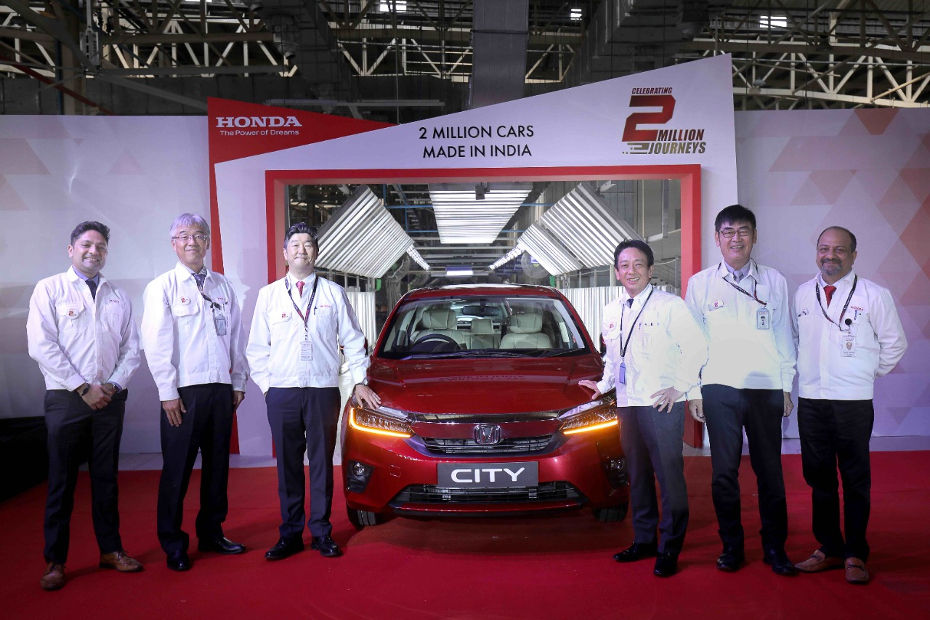 Honda Cars India, which commenced operations in Dec 1997, has crossed the 2 million production milestone in India today, with the rollout of a City from its Tapukara plant in Alwar, Rajasthan.

Also Read: Benefits Of Over Rs 63,000 Offered On Honda Cars In November

Honda’s current lineup of vehicles include the City, Amaze, WR-V and Jazz. The company now exports its City and Amaze to 16 international markets around the world.

The company’s Tapukara facility in Rajasthan is laid out across 450 acres and has a capacity of producing 1,80,000 cars per year. Honda has already infused over Rs 10,000 crores in setting up its India operations. Honda’s wide sales network covers 330 dealerships across 242 cities in the country.

Also Read: Look What Honda's Been Caught Testing In India - It's the City Facelift!

Here’s the press statement from the manufacturer

Rolls out its 2,000,000th car made in India from its Tapukara plant in Rajasthan

HCIL began production operations in Dec 1997 with a focus on offering premium and world class products for its customers in India.  The 2 Million milestone also reiterates Honda’s commitment towards the “Make in India” vision of Govt. of India.

Speaking on the occasion, Mr Takuya Tsumura, President & CEO, Honda Cars India Ltd, said, “The historic milestone of 2 Million Production roll out in India is a testimony to Honda’s commitment to the ‘Make in India’ initiative for the last 25 years. We express our sincere gratitude to all our customers, dealer partners and supplier partners for their confidence in us and making Honda a very loved and trusted brand in the country. Our state-of-the-art manufacturing operations in India are equipped to manufacture automobiles and components of global quality standards for supply to both domestic and export markets. We remain committed to providing all our customers with the most advanced, cutting-edge technology products for a premium and worry-free ownership experience, which add value to their daily lives.” “At Honda, our corporate goal is to be a company that society wants to exist. In this spirit, we believe that our efforts also benefit the socio economic development of the region and local community,” he added.

Also Read: Mahindra, Honda And Mercedes-Benz Among Top Carmakers Who Will NOT Be At 2023 Auto Expo

HCIL not only build automobiles in India to meet the needs of customers here. India also serves as a key export base for Honda – for both completed vehicles and components. The company currently exports made in India Honda City and Honda Amaze to 16 markets across the globe.

The company has cumulatively invested over Rs 10,000 crore since setting up its operations in India.

Honda Cars India’s state-of-the-art manufacturing facility in Tapukara, Distt. Alwar, Rajasthan, is spread across 450 acres and has a production capacity of 180,000 vehicles per year. The facility is an integrated manufacturing unit including all functions of Forging, Press Shop, Powertrain shop, Weld shop, Paint shop, Plastic Molding, Engine assembly, Frame assembly and Engine Testing facility. This plant is the culmination of the best manufacturing know-how and practices gathered from Honda’s global operations. It employs optimum automation, latest equipment and best layout for achieving high quality, best ergonomics, improved operational efficiency and safety. The plant is highly focused on conservation of the environment and efficient use of energy & other natural resources.

Honda Cars India values customer experience and strives to provide the finest services to every customer from its 330 dealership facilities spread over 242 cities in India.