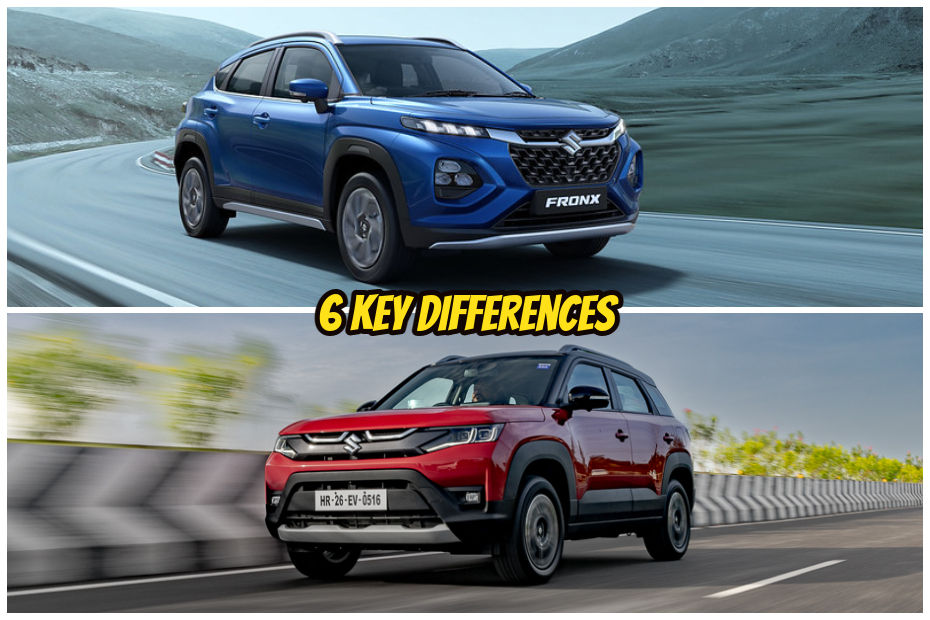 Maruti has added another ‘SUV’ to its lineup, the Fronx. It borrows design elements from the Baleno and Grand Vitara and combines them to become a subcompact crossover.

The Fronx is for people who are looking for something between the Baleno and Brezza, something with a modern design language and practical ground clearance for imperfect Indian road conditions, but without the traditional SUV shape.

Also Read: This Is What Makes Maruti Fronx & Baleno Similar Yet Different

We have already talked about the differences between the Fronx and Baleno, and now, it's time to see how different it is from another sub-four-metre offering from Maruti, the Brezza:

While the Brezza is more of a box-shaped SUV, the Fronx’s design is more like a coupe, one that’s jacked up a bit. When looked at from the front, the Brezza looks premium but plain, while the Fronx’s front seems to follow along the lines of the more upmarket Grand Vitara.

The side profile of the Brezza is similar to its previous iteration and, while more mature with its design, remains relatively straight-edged. The Fronx on the other hand borrows its styling from the Baleno, including that sporty slanting roofline.

Both are offerings are under four metres long, but the Brezza is wider and taller by a small but noticeable margin. The biggest difference is understandably in their heights, with the Fronx being a sportier shape, but it also has a slightly longer wheelbase.

When it comes to the interior of both cars, the Fronx and Brezza take very different approaches. The Brezza gets a dual-tone (black and brown) interior theme, while the Fronx comes with a black and burgundy interior finish. The steering and infotainment display have the same look in both, but the overall cabin theme is different. Where the dashboard of the Brezza is more sharp-looking, the same in the Fronx gets a more curved design.

This is perhaps where the Brezza and Fronx are most similar. Both get a nine-inch touchscreen infotainment system with wireless Android Auto and Apple CarPlay, ARKAMYS sound system, wireless phone charger and a heads-up display. The Brezza also gets a sunroof and ambient lighting, which are absent on the Fronx.

When it comes to safety, both get six airbags and while they are limited to the top trims of the Brezza, Fronx has them as standard. Other safety features like ABS and EBD, electronic stability program (ESP), rear parking sensors and a 360-degree camera are common on both.

What The Prices Say

While the prices for the Fronx are not out yet, we expect them to start from Rs 8 lakh (ex-showroom) onwards. That would put it on the same plane as the Brezza with regard to prices, but its top trims will likely be more affordable than the Brezza’s top trims.

The Fronx will be a NEXA offering while the Brezza is an Arena product. It will offer buyers a new choice in the form of a crossover SUV and fill the gap between the premium hatchback, the Baleno and the Brezza subcompact SUV. Let us know what you think about the Fronx in the comment section below.