The second-generation of Porsche’s Gran Turismo model is based on VW Group’s new MSB Platform (developed by Porsche) and has resulted in a nearly 70kg weight reduction over the new Panamera’s predecessor. 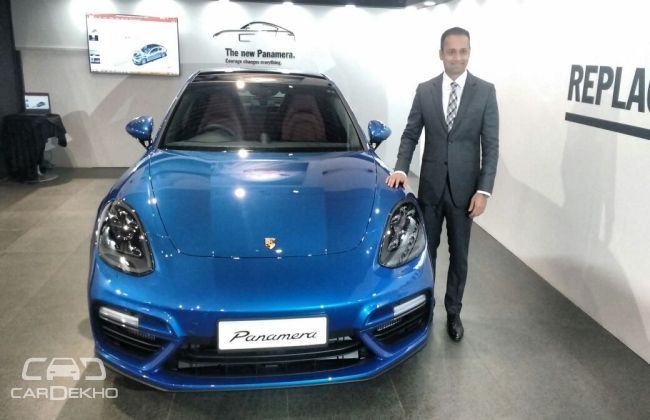 It went on sale internationally in late 2016 and is manufactured at the Porsche plant in Leipzig, Germany like the previous model. For the uninitiated, the first-generation Panamera was introduced globally in April 2009 and its production ended in August 2016, after seven years with 164,503 units sold.

The second-gen Panamera is based on a new MSB platform and is nearly 70kg lighter and five per cent stiffer than the previous model, courtesy extensive use of aluminium. Dimensionally, the new Panamera is longer (nearly 35mm), wider and taller (both by nearly 5mm) than the model it replaces, and its wheelbase has also grown significantly (by as much as 30mm).

The second-gen Panamera Turbo packs a newly developed 4.0-litre twin-turbocharged V8 petrol motor. The motor churns out 550PS of max power between 5,750 and 6,000rpm and 770Nm of peak torque between 1,960 and 4,500rpm. Porsche says that the new motor gets a 30PS and 70Nm bump in power and torque, respectively, and its fuel efficiency has also increased by 10 per cent. The increase in overall efficiency is largely due to its new eight-speed dual-clutch transmission (PDK II), which replaces the old seven-speed dual-clutch unit. It also features cylinder deactivation tech.

Speaking of performance figures, since its a sports saloon, the all-wheel-drive Panamera Turbo sprints from nought to 100kmph in 3.8 seconds. Opt for the Sport Chrono package and this time comes down to 3.6 seconds! And it will keep on accelerating till 306kmph! The Turbo Executive also uses the same engine, but takes 3.9 seconds for the 0-100kmph sprint (3.7 seconds with Sport Chrono package). With its greater dimensions (150mm boost in length and wheelbase over the Panamera Turbo), it is marginally slower, but promises greater cabin space.

As far as its design is concerned, the second-gen Panamera appears to be an evolved version of the previous model. The front profile is reminiscent of the first-gen model, while the rear profile is now sharper and the new connected tail lamps hint of the latest 911. Its coupe-like roofline now looks ‘faster’ than before. In terms of features, the Panamera Turbo boasts LED headlights (standard) with Porsche’s Dynamic Light System (PDLS), panoramic sunroof, four-zone climate control with a touchscreen display for the rear occupants, sound systems by Bose or Burmester, and others.

Besides these two models, the diesel versions of the Panamera will be introduced later this year.