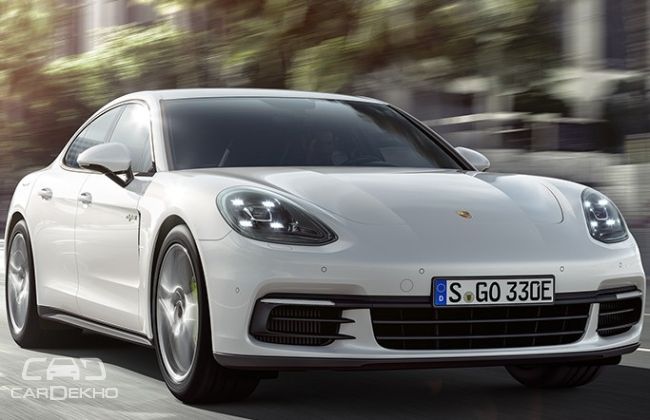 When we talk about installation of hybrid and electric tech in cars, the aim remains to reduce emissions and fuel consumption. But when Porsche talks about electrics and hybrids, all these reasons becomes secondary. The primary purpose remains to gulp long distances as fast as possible. Following this concept, the German brand has come up with a new hybrid model - the Panamera 4 E-Hybrid. This car has 462PS power along with a steep torque figure of 700Nm! The result: a top speed of 278kmph and a 0-100kmph time of just 4.6 seconds. And yes, it saves the environment too as it always starts on pure electric juice, has an electric range of 50km, and an all-electric top speed of 150kmph.

It borrows its hybrid tech from one of the fastest and most advanced all-wheel drive cars on the planet - the 877PS 918 Spyder. In the older Panamera hybrid model, the electric motor was only made to work when the driver used more than 80% of the accelerator. But in the 4 E-Hybrid, the 136PS electric motor is always working in sync with the 2.9-litre V6 bi-turbo engine to give out the best performance possible at all times. All this power is delivered to all the wheels via a fast-shifting eight-speed PDK gearbox.

Another challenge with electrics and a few hybrid cars is the charging of batteries. The lab coats at Porsche have managed to fit bigger batteries in this Panamera while keeping their weight the same. Also, the high-voltage battery takes just 5.8 hours to fully charge via a 230-V, 10-A connection, and if the driver chooses to use the optional 7.2 kW on-board charger and a 230-V, 32-A connection, the battery fully charges in just 3.6 hours.

The charging process can also be started using a timer via Porsche Communication Management (PCM) or the Porsche Car Connect app (for smartphones and Apple Watch). Moreover, the Panamera 4 E-Hybrid is fitted as standard with auxiliary air conditioning to cool or heat the passenger compartment during charging.

The Panamera 4 E-hybrid also comes with the 'Porsche Advanced Cockpit'. This system has touch-sensitive panels and individually configurable displays. There are two seven-inch screens on either side of the analogue tachometer of the interactive cockpit and the power meter is specifically tailored to the hybrid operation. This display is similar to that used in the Porsche 918 Spyder.

The power meter provides data such as the amount of electrical energy currently being used as well as that recovered through recuperation. Also, the 12.3-inch touchscreen display has the boost assistant display which shows the energy available for boosting, while the hybrid assistant provides various visual signals for regulating the electrical drive power.

This is not just an ordinary hybrid sedan, but one which has learned its tricks from the best hypercar in the hybrid business. The Panamera 4 E-hybrid will be unveiled at the Paris Motor Show which will take place at the Paris expo Porte de Versailles from October 1-16, 2016.