Among the upcoming cars, we have the XUV700 and new-generation Scorpio incoming 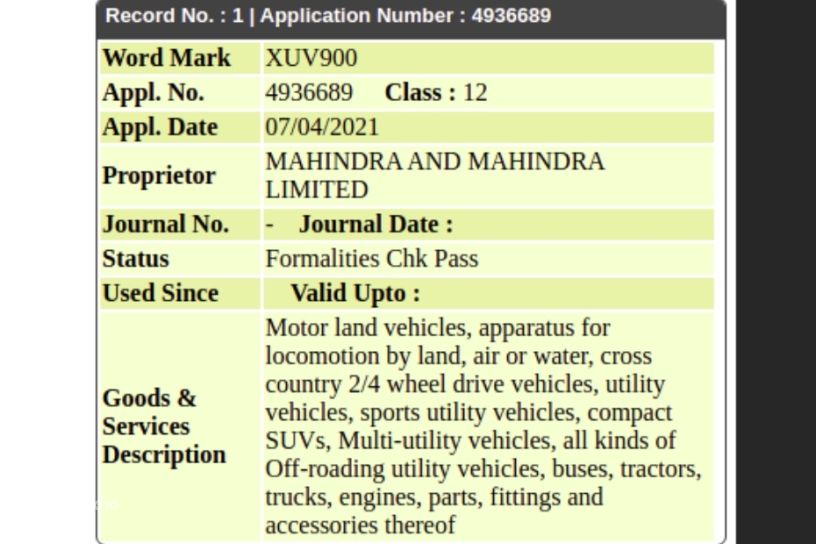 Mahindra is gearing up for new launches, which include the recently announced XUV700, and the new Scorpio. While the upcoming XUV700 is technically the spiritual successor and will replace the ageing XUV500, the latter will return as a new-gen sometime in 2022. Besides these, it seems like Mahindra is also planning to expand the XUV series with some new nameplates.

Mahindra trademarked the XUV900, XUV400 and XUV100, along with the XUV700 in April 2021. The three-row XUV700 will hit the roads around July 2021 and will primarily rival the Tata Safari. The XUV900 could be a future replacement to the SsangYong-derived Alturas G4 and the carmaker’s flagship offering as the South Korean partner has been in troubled waters of late and Mahindra is likely to sell it off.

Mahindra’s Alturas G4 is an affordable alternative to the Toyota Fortuner and Ford Endeavour. However, it is not as popular as its rivals. Since the XUV brand name is quite popular in India, its replacement could be a feature-rich offering with off-roading capabilities, along with the XUV900 nameplate to attract more attention. Mahindra might go the monocoque way with this one like Skoda Kodiaq, VW Tiguan Allspace and the upcoming Jeep H6 three-row SUV.

The XUV400 could be positioned below the new-generation XUV500. The XUV100 might be a replacement for the ageing KUV100 in the micro-SUV space as the rival to the Tata HBX. While Mahindra has trademarked these names, we are not sure which one of them would make it to production.

The upcoming XUV700 will sport new 2.0-litre turbo-petrol and 2.2-litre diesel engines, borrowed from the Thar but in a higher state of tuning. Further, it is expected to get a panoramic sunroof, twin display setup, connected car technology and radar-based driving aids.

The outgoing XUV500 will be discontinued temporarily, to make way for the new-generation model. It will be a five-seater SUV and will take on the might of the Hyundai Creta and Kia Seltos probably in 2022.