The fight between Honda City and Hyundai Verna intensified further when Maruti Suzuki planted the Ciaz in the same segment last year. This was the second attempt by the country’s largest carmaker to crack this segment and replaced the not-so-successful SX4.

Since then, we’ve been tracking the sales numbers of all these cars and noticed that the City with help of its frugal diesel engine has dominated the segment. The Ciaz has been steadily eating into both the City’s and Verna’s sales numbers but the Verna has been hit the worst. 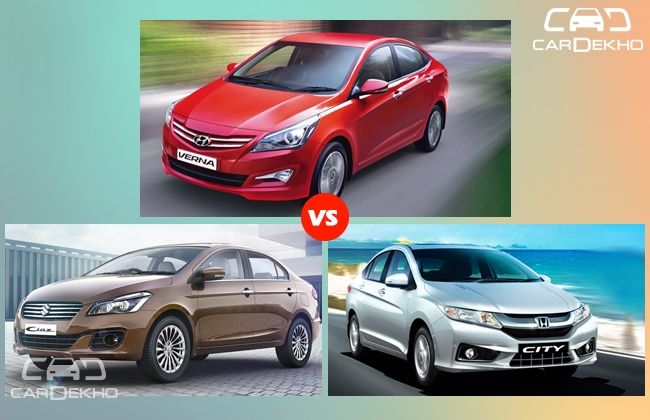 The sales data from the past three months highlight this trend properly. The City as well as the Verna have seen a decline in their respective sales numbers, whereas the Ciaz has seen a marginal increase over the same period.

The Hyundai Verna, which is languishing at the bottom of the charts in this segment, was at one time the segment leader. The Honda City then was only available with a petrol engine, which in turn points to the fact that the powerful but efficient 1.5-litre i-DTEC engine has made quite an impression amongst the customers in this segment.