Want one in civilian spec for yourself? You absolutely can, and it isn’t as expensive as you’d think! 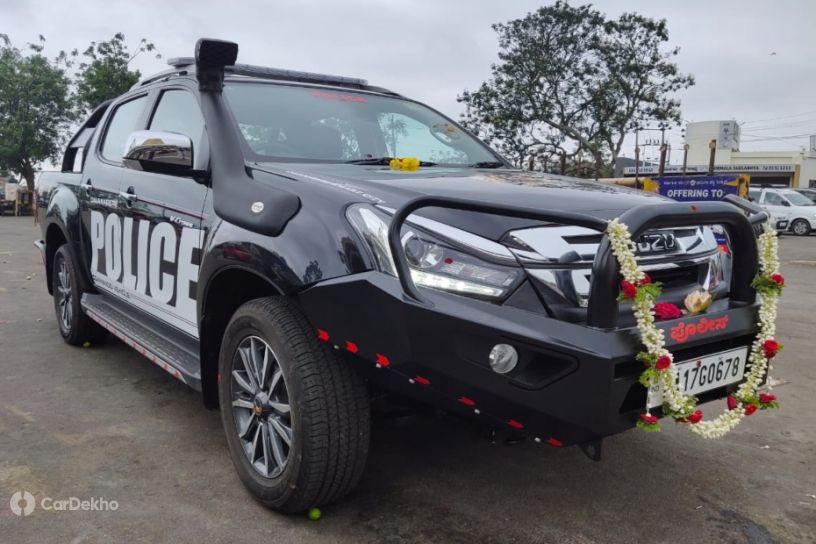 Police cars in India, from older Mahindra jeeps to the Gypsies still in use today, have always carried with them an aura of awe and power. But imagine an Indian police car that goes even further, say something that looks like it’s been liberally fed on steroids. That’s what Mysuru-based Blue Garage has custom-built for police commandos in Davangere. We contacted the shop to find out more about these trucks and their mods.

“The first phase of modifications is done, and we’ll be starting with the second phase soon,” says Avinash G from Blue Garage. In 2019, the state government had approached him and Blue Garage co-founder Muthanna BB to build riot-proof police vehicles. The duo had earlier helped the Indonesian Police with a similar project, but they had only built and supplied parts back then. For the Davanagere Police cars, they have built up the trucks in-house. The police have been using these trucks for two months, and here’s a video of them in action:

The current list of modifications includes a snorkel air intake, winch, front and rear suspension adjustable for ride height and damping, police siren, slim LED roof light bar, and front and rear bull-bars. The latter were fabricated in-house, along with front and rear off-roading bumpers and full underbody cladding. They have also made side shields for the bed and a gun rack. While these trucks have raised a hue and cry among netizens for sporting bull bars, a mod that’s outright illegal for all civilians, government authorities can commission custom-built vehicles as per their specific needs, so there’s that.

We can’t fault the authorities for choosing the Isuzu D-Max V-Cross as the base for modifications. The trucks were assigned to Blue Garage in 2019, so they are BS4-compliant, powered by a 134PS/320Nm 2.5-litre diesel engine paired with a 5-speed manual transmission and shift-on-fly four-wheel-drive. Currently, the BS6 D-Max V-Cross comes with a 163PS/360Nm 1.9-litre diesel engine with 6-speed manual and automatic transmission options, featuring 4x4 and 4x2 drivetrain configurations.

“We propose modifications and wait for them to be approved,” Avinash tells us. The LED lights, for example, are brighter and more energy-efficient than regular halogen police lights. The team have suggested adding run-flat tyres and an alternative 12-volt battery to power the lights and other auxiliary equipment. Those modifications will be added once approved by the police department.

The suspension is from the Australia-based 4x4 parts manufacturer TJM. Most of the other mods have been designed and manufactured in-house. For the second phase, Blue Garages will equip the cars with windshield protection and supporting mods such as run-flat tyres, if approved.

Avinash tells us that the first phase of modifications took 6 months to finish, an unusually long time for the team. “Lockdown has slowed things down as have new directives that forbid imports from China," he added.

We asked them how much it would cost to build a civilian version based on these trucks, with a basic set of modifications. “About 2-3 lakhs,” says Avinash, if you only get aftermarket suspension, and front, rear and underbody protection. Of course, the police trucks that you see in the pictures have a more sophisticated set of modifications that are much more expensive.

The Blue Garages website has a full catalogue of parts and an online store. Considering that even a base-spec Isuzu D-Max V-Cross costs around Rs 20 lakh ex-showroom, basic modifications are a small price to pay to have better approach and departure angles, wading depth and adequate protection from rock hits and minor off-road crashes.

We all know that vehicle modifications are a grey area in India. You might get away with an invisible suspension mod, but things like off-road bumpers and bull bars are banned since they compromise the pedestrian protection engineered into modern cars. But off-road enthusiasts often use metal bumpers and bull-bars bolted to their truck’s ladder frame chassis. If done correctly, these mods can help protect the frame and bodywork of your pricey SUV or truck from minor hits with rocks and shrubs while off-roading.

We hope that the government revises legislation to accommodate the distinction between safe and dangerous aftermarket modifications. For now, you can enjoy seeing this trail-ready Isuzu patrolling the streets in Karnataka. Let us know in the comments if you want to see such vehicles in your city’s police force, too.