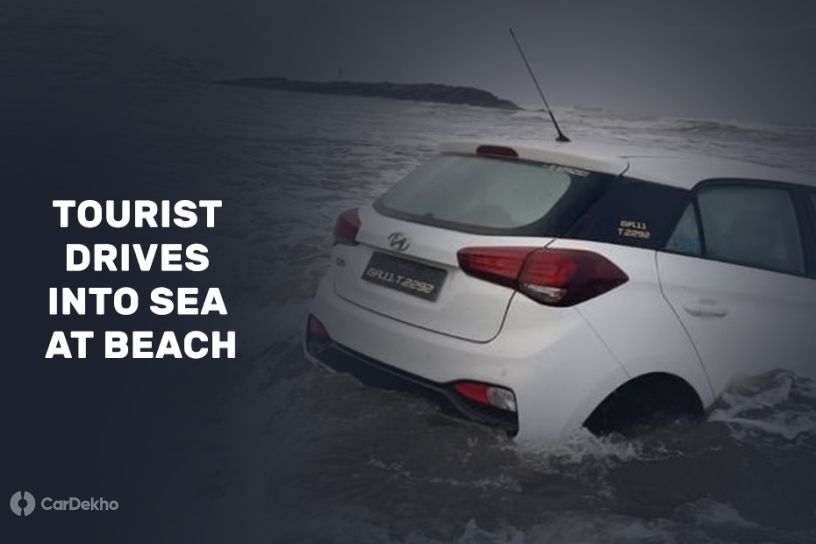 If you’ve been active on social media recently, you might have seen the video of a distraught youth circling a second-gen Hyundai Elite i20 that was, literally, beached in the sand and getting battered by the sea waves. The incident happened at Morjim beach in Goa and the driver of the rental hatchback was reportedly arrested later for ‘rash and negligent driving.’ Here’s the video:

Reports allege the driver drove the car across the beach and into the water. But we think that’s unlikely. For one, there would have been deep tracks in the wet sand behind the car. The second reason is more obvious -- why would someone purposely drive their car into the ocean if their name is on the rental agreement?

So what’s the more probable cause for this incident?

It seems to us that the 25-year old driver was likely oblivious about the natural phenomenon of high and low tides. He is likely to have parked the car too close to the water during the daytime and left to do other beach activities. Given that Goa has had rainfall and strong winds throughout the past week, it might not have taken much time for the car to be completely engulfed with the rising evening tide.

The saltwater could have been enough to fry the electrical components of the Hyundai i20 and render it unable to start. In addition, all four wheels were buried almost halfway in the sand, ensuring that the youth wouldn’t have been able to even push the car out of the water without help. In the video, he can be seen frantically checking through the locked car’s closed windows to see if it was filling up with water.

A similar incident happened in Mumbai’s Navapur beach in 2019 when a Maruti Suzuki Ertiga got stuck in the sand after being tossed around by the waves of a stormy sea. The passengers managed to escape just in time.

Why was the driver/renter arrested?

Reports say that the Pernem police arrested him for ‘rash and negligent driving’ because he was endangering other people on the beach by driving a car on it. It’s possible that the beach had restrictions on the entry of cars.

How can I avoid such a situation?

Know that many beaches in India, especially popular ones, restrict the entry of cars. The signage may not always be visible or clear, so you might have to contact the local authorities to ensure that you won’t get into trouble. Otherwise, you might hear the roar of a Polaris engine and red and blue lights heading in your direction (but only if you’re on a Mumbai beach). That said, there is a driving beach in India that doesn’t restrict the entry of cars -- the Muzhappilangad beach in Kerala.

If you do have a green light for driving onto the beach, never park near the edge of the water. Instead, choose an elevated spot that is known to stay dry even when the high tides come in. Don’t park your car in the sand at all on a stormy day. Even a heavy rainfall can turn the dry, powdery sand into a giant trap for your wheels.

In addition, it’s always better to keep your family, friends and some locals informed, so that you can ask for help if necessary.