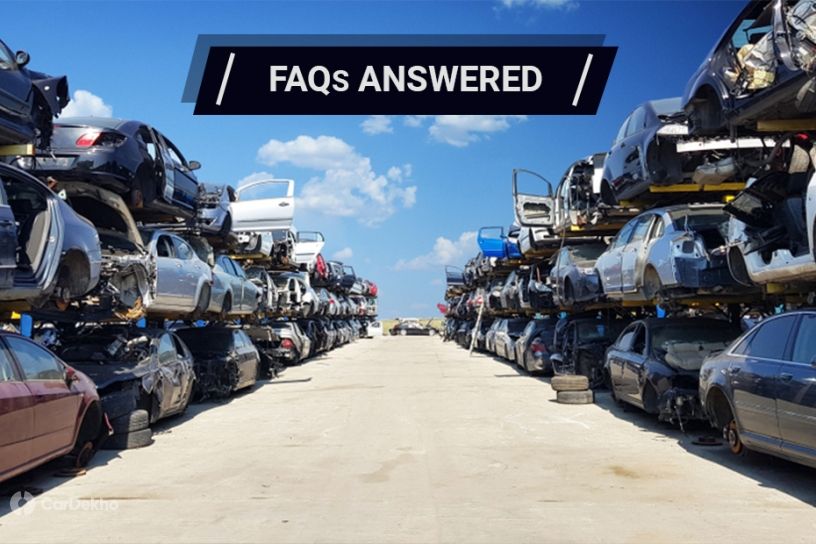 The government’s new scrappage policy aims to reduce India’s impact on the environment by isolating and recycling cars that don’t meet pollution standards. Instead of imposing an upper limit on the age of the car, the new policy allows cars to be driven for as long as they can meet regulations. The policy defines the conditions of a vehicle’s registration renewal, mandates testing and inspection, and provides incentives for end-of-life recycling to new car buyers who scrap their old cars.

But what does this new change mean for you as a car owner, potential car buyer, and petrolhead? We’re here to simplify the government speak so that you can clearly understand what this new law entails.

Under what conditions is my car liable to be scrapped?

You can send your car in for scrapping if:

Other than these conditions, decommissioned government vehicles and abandoned cars will also be scrapped. Know that the scrapping of a car is completely voluntary, but a car can’t be driven on public roads if it fails inspection.

How do the new rules apply in the National Capital Region (NCR)?

Recent reports say that the Delhi government issued an order advising citizens in the national capital region (NCR) to scrap their petrol cars older than 15 years and diesel cars older than 10 years. The Supreme Court had placed the infamous ban on older cars in 2018. Although the new vehicle scrappage policy applies nation-wide, as of this writing, you still aren’t allowed to drive an older car in NCR yet. Until the Apex court revises its 2018 ruling after considering the new policy, the ban continues to be in place.

Where can I get my car scrapped or tested?

Also See: An SUV For Champions: This Is What Neeraj Chopra’s Mahindra XUV700 Could Look Like

What will they test during an inspection?

Although the full testing procedure hasn’t been officially outlined yet, the inspection procedure could be similar to the safety and emissions testing procedure that is followed in other countries. Expect a detailed check of the safety equipment in your car (seatbelts, airbags), a pollution test (according to BS4 or BS6-based standards, whichever applicable) and other tests such as headlight alignment checks. In addition, you can expect authorities to test your car’s brakes and engine components, and check for structural damage and rust. In addition, they could also inspect electronic components.

How much will it cost to get my 15-year-old car inspected?

Here are the maximum fees you can expect to pay for a fitness evaluation and registration renewal:

If you have an imported motorbike, you’ll have to pay Rs 10,000 for registration renewal. Imported cars will be renewed for Rs 40,000. Apart from these, you’ll have to pay road tax for the next 5 years. The rules and rates for vintage cars (cars older than 50 years) are slightly different, and you can read about them here.

How long can I keep the car if it passes inspection?

Once a 15-year old car passes inspection and gets a renewed RC, you can drive it for up to 5 years. After that, you’ll have to repeat the inspection and registration renewal process and pay the fees and taxes to drive your car for another 5 years, and so on.

If my car fails inspection, what options do I have?

Each car is allowed one more re-test after you get the necessary repairs performed. If it fails the re-test, your car will not get a renewed registration, and it’ll be declared an end-of-life vehicle (ELV), un-drivable on public roads.

What is the process to get my car scrapped?

There are plenty of automotive scrapyards spread across our cities and towns. But to avail the incentives under this scheme, you’ll have to get your car to a registered scrapping station. They’ll look up the car on the VAHAN database, check your identity, and take your car’s papers. The forms and details of documentation can be found on the government website here. Once the verification process is complete, they’ll hand you a certificate of scrapping. The registered scrapping facility will remit the agreed scrap value of the car to your bank account. Alternatively, you can get the amount in a bank cheque.

What incentives/benefits can I expect if I get my old car scrapped?

When you go to buy a new car after getting your scrapping certificate, you’ll could get a concession of up to 25 per cent on road tax from the state government for the first 15 years of the car’s life. Registration fees are expected to be fully waived, and carmakers have been advised to offer a 5 per cent discount on the purchase of a new vehicle as well. It remains to be seen which carmakers will offer this discount.

What happens to my car at the scrapping facility?

The scrapping facility starts by stripping down your car and segregating the parts and components. All the fluids are drained out -- engine oil, brake fluid, fuel etc. They remove the wheels, tyres and battery. The engine, transmission, infotainment system, alternator and other electronic and mechanical subassemblies might still be serviceable and can be sold on. This is a labour-intensive manual job, and if done properly, increases the profit margins of the scrapping centre.

Once the car is fully stripped of most of its parts, it goes for further processing, often to an off-site facility. The air conditioning unit, pipes, and heater core are often intact and can be salvaged. All glass and plastic bits are removed, and all the paint is sanded off. The shell that remains gets crushed, shredded, and recycled to form new metal.

I have a 2007 model car, now looking to buy a new car. The dealer isn't aware of this new policy. When and how can I get the benefits