Maruti Suzuki S-Cross: How Different Is The New Model From The Old One?

Can’t make out what’s different on the new S-Cross? 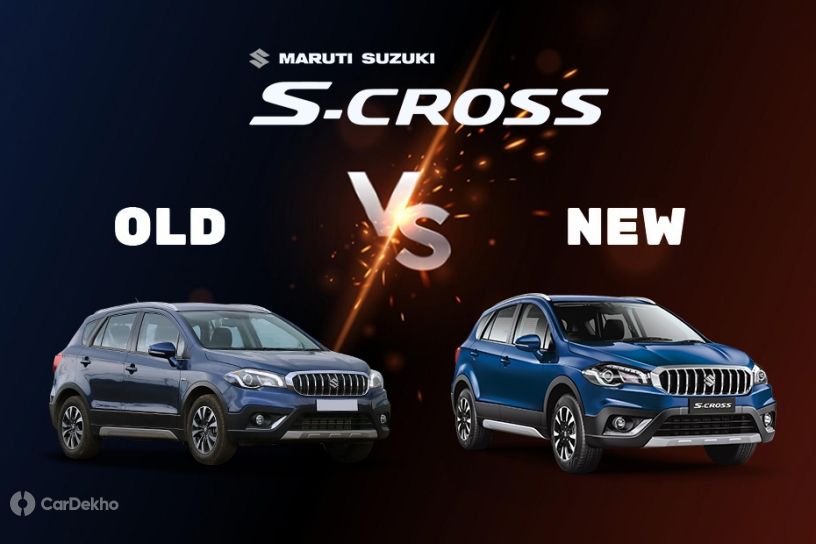 The Maruti S-Cross was first launched in India in 2015 and was offered as a diesel-only offering until recently. With Maruti’s decision to do away with the diesel engines in the BS6 era, the carmaker recently launched it as a petrol-only model. Since the S-Cross was given a well-received mild facelift a few years ago, Maruti has opted to stick to just an engine upgrade for the new one. Let’s see what stayed the same and if we can spot any differences over the old one:

Maruti launched the facelifted S-Cross in 2017 that got a couple of cosmetic upgrades. The same design has been carried forward to the petrol-powered version of the crossover. Up front, it gets the same vertical-slat chrome grille flanked by auto-LED projector headlamps with integrated LED DRLs and a chunky bumper for that rugged presence.

From the side, the only difference is the absence of the ‘DDiS’ badge on the front fenders which was representative of the old diesel engine under the hood. Apart from that, it looks identical to the diesel-powered S-Cross and is offered with the same 16-inch alloy wheels.

At the rear, the S-Cross continues to sport LED tail lamps and the ‘smart-hybrid’ badge on the boot.

Also Read: Maruti May Bring Back The 1.5-Litre Diesel If There Is Demand For It

The S-Cross petrol’s cabin looks the same as before except for the addition of Maruti’s latest 7-inch touchscreen infotainment system (with Android Auto and Apple CarPlay connectivity). Though Maruti offers the S-Cross with Suzuki Connect for vehicle telematics, it still misses out on connected car tech that’s offered with some of its rivals.

Maruti offers the new S-Cross with the same features as before that includes cruise control, leather upholstery and auto AC. Yes, it still misses out on the trendy sunroof feature but it seems Maruti feels that S-Cross buyers won’t be too fussed over it.

The primary change has come in terms of the engine that’s on offer. While the older S-Cross was powered by the BS4 1.3-litre diesel engine (90PS/200Nm), the new 1.5-litre petrol motor is more powerful (105PS) but less torquier (138Nm). It is offered with a 5-speed manual as well as a 4-speed automatic transmission option that’s on offer for the first time in India. The mild-hybrid tech with its idle stop-start feature helps improve fuel efficiency with an ARAI claimed figure of 18.55kmpl (manual) and 18.43kmpl (automatic).

Maruti continues to offer the S-Cross in four variants: Sigma, Delta, Zeta and Alpha. The new petrol engine is larger, meets more stringent emission norms while still being more affordable than the BS4 diesel-powered model. Here’s a look at the variant-wise pricing of the S-Cross:

The S-Cross petrol has the lowest entry-price in the segment and even with the new automatic gearbox, it’s the most affordable option. To see how it fares against its rivals in terms of price, head here.

S cross is good in overall looks from exterior to interior it's front chrome grill design is just same as BMW. Very luxurious looking. I have already booked and iam eagerly waiting for this to come home

Latest Cars
Upcoming Cars
Popular Cars
HomeNew CarsNewsMaruti Suzuki S-Cross: How Different Is The New Model From The Old One?