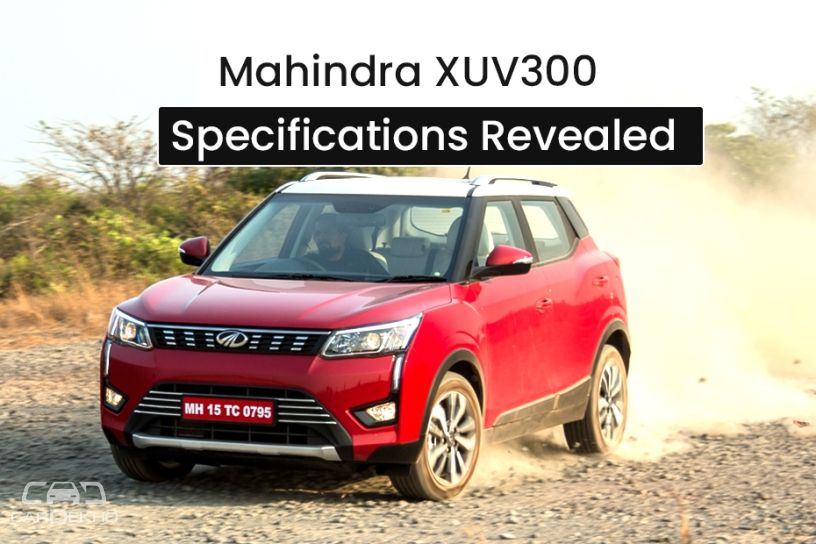 Update: Mahindra has launched the XUV300 in India, with the prices beginning at Rs 7.90 lakh (ex-showroom India). Read more about it here.

Mahindra is all set to launch the XUV300 in India on 14 February 2019. The carmaker had already started accepting pre-launch bookings for a token amount of Rs 20,000 and now Mahindra has also revealed the complete specifications of the upcoming sub-4m SUV.

We have already driven the Mahindra XUV300, checkout our first drive review here.

Let’s start with the dimensions:

Mahindra has not revealed variant-wise details of the upcoming sub-4m SUV, but thanks to a leaked brochure, we know what it will pack. The XUV300 will be available in the following variants: W4, W6, W8 and W8(O). Related: Mahindra XUV300 Variant Wise Features List Leaked Ahead Of Launch

Safety: The XUV300 will be equipped with dual front airbags, ABS with EBD and ISOFIX child seat anchors as standard. The higher variants, on the other hand, are equipped with front and rear parking sensors, seven airbags and ESP as well.

Infotainment: In the lower variants (W4 and W6) the XUV300 will get a 2-din music system. The W8 and W8(O) variants will get a 7-inch touchscreen infotainment system with Apple CarPlay and Android Auto.

Wheels: The W4 and W6 variants will get 16-inch steel wheels, while the W8 and W8(O) will be equipped with 17-inch alloys. The top variant will get a full-size spare wheel, but won’t be an alloy wheel.

Brakes: The XUV300 will be available with all four disc brakes, which is a segment-first offering.

Other features: The XUV300 will also be equipped with features such as dual zone climate control (segment-first), heated ORVMs (segment-first), sunroof, electrically adjustable and foldable ORVMs, rain sensing wipers, multiple steering modes (segment-first), push button start, reverse parking camera, cruise control and tyre pressure monitoring system (also shows pressure of the spare wheel). The XUV300 also gets Tyre Direction Monitor, which shows the direction of the front wheels when the handbrake is engaged. This feature is not only a segment-first but is not available on the cars even a few segments above the XUV300.

Price: Mahindra will reveal the price of the XUV300 on 14 February, 2019. The carmaker has already hinted that the XUV300 could be priced in the Rs 8 lakh to Rs 12 lakh range.