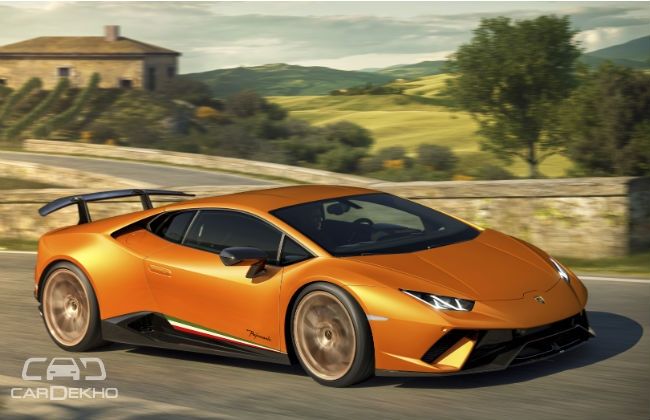 A couple of weeks back, Lamborghini took the wraps off the Huracan Performante at the 2017 Geneva International Motor Show. News has now come in that the Italian super-carmaker will now be launching it in India on April 7, 2017. This is no ordinary Huracan though. It is the undisputed ‘King of the ‘Ring’ as it went around the Nürburgring Nordschleife in Germany in just 6 minutes and 52.01 seconds. That’s faster than any other modern day, road-legal, mass-production car in the world. Just to put that in perspective, the Huracan Performante is nearly five seconds quicker than the Porsche 918 Spyder and seven seconds faster than its performance-driven elder sibling, the Aventador SV.

So what powers this rampaging baby bull? In essence, it is the same naturally aspirated 5.2-litre V10 engine that does duty in the rest of the Huracan family. In the Huracan Performante, it packs more punch. The 10-cylinder petrol engine belts out 640PS of power and 600Nm of torque. That makes it the most powerful Huracan ever built. Transmission duties are handled by a seven-speed dual clutch transmission and with 70 per cent of the engine’s torque available at just 1,000 rpm, the car can crack the naught to 100kmph sprint in just 2.9 seconds. That’s exactly the same as the Lamborghini Aventador S, which was recently launched in India. The Italian carmaker claims that the Huracan Performante can reach a top speed of 325kmph.

It is not just power that the Italians have worked on. To bring the overall weight down by 40kg, the Huracan Performante is built on a hybrid aluminium and carbon fibre frame. The body itself is made out of aluminium and Lambo’s forged composite.

Prices for the current range of Lamborghini Huracan variants start at Rs 2.99 crore and go all the way up to Rs 3.89 crore (ex-showroom Delhi). We expect the Performante spec to cost around the Rs 4 crore mark.