They are essentially small hatchbacks but are they capable enough to be called an SUV? Let’s find out 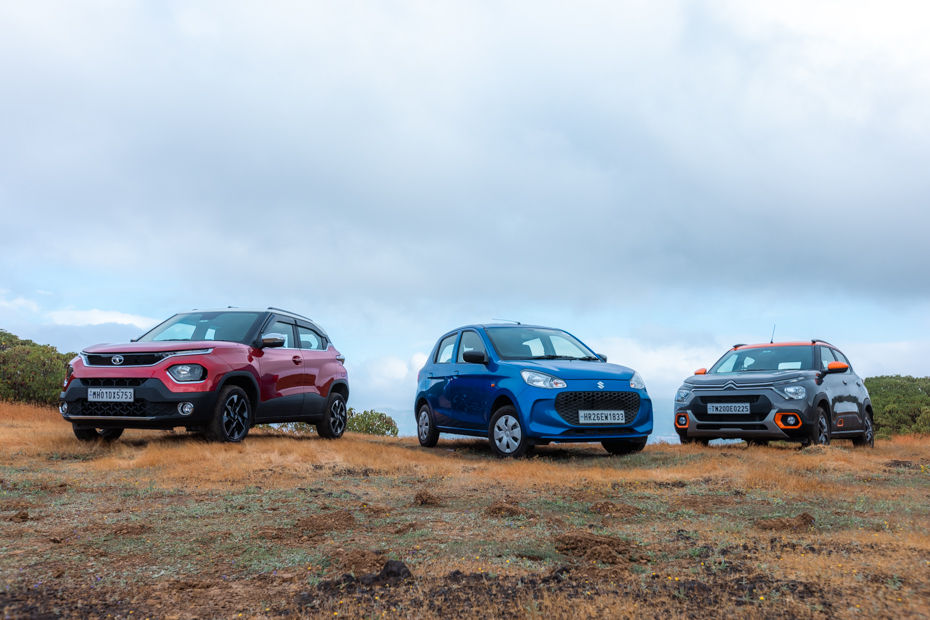 Any hatchback with the slightest of rugged looks and high ground clearance is nowadays calling itself an SUV. Two of the newer micro SUVs are the Citroen C3 and Tata Punch which are essentially hatchbacks with a crossover look. However, the most popular SUV in the country is one which is trusted by millions of people to get them out of tricky situations -- The Alto K10.

So, let’s find out if the C3 and Punch have what it takes to beat the ultimate ‘SUV’ in three simple tests. And of course, all of these will happen off the road. Three points will be awarded to the winner, two to the runner up and one to the third place finisher in each test.

In this brake test, we drive the car at 40 kmph and then apply full brakes to see which one stops the earliest. It’s not a proper road but rather a gravel and muddy road, which makes things more challenging and interesting.

Just for reference, through our road tests, the C3 was able to stop from 100 kmph to zero in 41.04 metres, while the Punch stopped around two metres ahead. Alto is the winner even on the road with the least braking distance.

A family hatch needs to keep the occupants comfortable no after where you drive it. To test the comfort of these hatchbacks, we will be using water. A mug is placed on the roof (with help from magnets) and filled up with 700 millilitres of water. The car that spills the least amount of water after a set distance wins.

In this test, we loaded all the three cars with four people and tried to climb the upslope as quickly as possible. The uphill is filled with ruts and harsh undulations. So, the traction, engine performance, power delivery, ground clearance and the suspension all will be tested here. Hence, we have decided to award double points in this test. So it’s 6, 4 and 2 for first, second and third.

Off we go, and all three cars do a lot of wheel spinning. The stones can be loudly heard hitting the underbelly as we tackle broken roads.

However, we still can’t call these cars ‘SUVs’. But yes, they are capable to some extent. The Tata Punch and Citroen C3 are best on the regular roads but it’s good to know that they have the ability to be of some help on different terrains. The Maruti Alto K10 is the most affordable here but is also the most capable. It’s the winner in the mug/water and braking test and isn’t too far back in the hill climb too. It is lightweight, peppy in performance, and has a good ride quality which helps it be the king of rough roads and hilly regions.