For the first time, the GLE will even get a third row of seats as an option 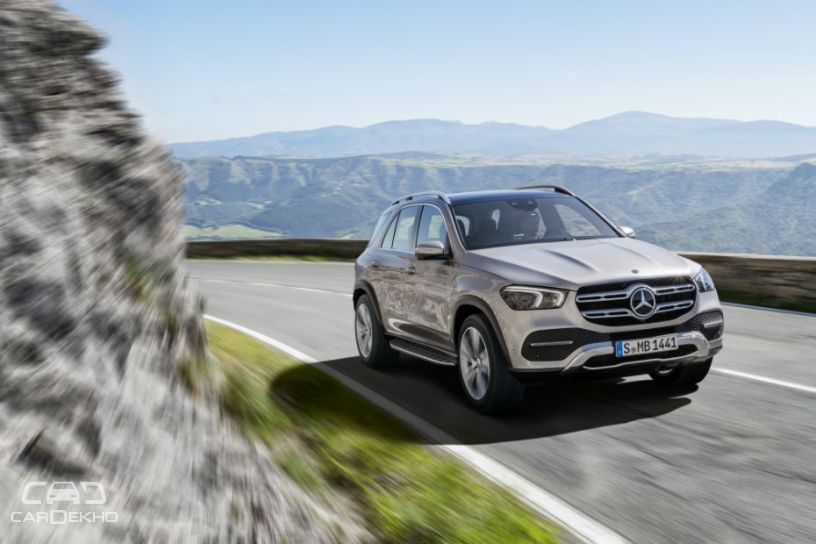 A week after the showcase of its first all-electric SUV, the EQC, Mercedes-Benz has now taken the wraps off the new generation of the GLE. Introduced in 1997 as the M-Class, Mercedes-Benz says that it has sold over 20 lakh units of the SUV (which was renamed the GLE in 2015) across the world. The new version will be showcased at the upcoming Paris Motor Show from October 4-14. For now, however, let’s take a look at the updates that the new-generation GLE packs.

The new-gen Mercedes-Benz GLE is seems bigger than the existing model. In fact, the wheelbase has increased by a whole 80mm. It’s also looks significantly different from the older model. The new GLE’s front-end looks more upright than the current model’s. The stretched-back headlamps of the current gen have been shown the door and the new ones appear more aggressive. The headlamps, which flank the new octagonal front grille, get MULTIBEAM technology which, Mercedes-Benz says, has a throw of more than 650 metres.

M-B claims that the GLE’s coefficient of drag of 0.29 is now the best in the segment. For perspective, the current GLE has a drag coefficient of 0.34. The GLE does it with a whole lot of aero-improving kit on the outside. Importantly, Merc has managed to improve the drag coefficient despite making the A-pillar more upright than before.

Like the front, the new GLE will be instantly recognisable from the rear as well. But at the rear, the cosmetic changes are more of an evolution of the current design. Signature design element like the rear quarter glass, which gives an impression of a wraparound rear windshield, has been carried forward. The licence plate will find a place on the bootlid like before and the tail-lamps, which have become sleeker now, continue to stretch along the rear fender. There is, however, a newfound ruggedness in the GLE’s design that is highlighted by the black cladding that runs all around. The current version in India doesn’t get this cladding.

The interiors of the SUV have been given a major overhaul. The 80mm increase in wheelbase has led to a 69mm increase in space in the second row. But the highlight has to be the six-way, electrically-adjustable second row seats. These can be adjusted fore and aft by up to 100mm, allowing variable legroom for second-row passengers. It also allows variable legroom for the third row occupants as well.

The luggage capacity is pegged at 825 litres with third row down and can be increased to a total of 2,055 litres by folding the second row. There is a thoughtful switch which can be pressed to lower the rear-end of the SUV for easier loading and unloading of the luggage.

The GLE gets two 12.3-inch displays for the MBUX multimedia system which first debuted on the latest A-Class. The seats, apart from being electrically adjustable with memory function, also pack ‘ENERGIZING’ kinetics function which supports changes to the seating posture by minute movements of cushioning and backrest. Taking man-machine interaction further up is the ‘Coach’ function which draws data from algorithms and a Garmin wearable tech to recommend massage modes that lessens driver fatigue.

If you thought the S-Class’ air suspension was sophisticated, the new GLE’ takes it to a new level with the E-Active Body Control. Mercedes’ says that this is the only unit on sale which can individually control the springs and dampers on each wheel. It can not only counter body roll but also control pitching and squat of the SUV.

The first of the Mercedes-Benz GLE (GLE 450 4MATIC) will get an inline-six petrol engine with 48V hybrid assistance which can produce 367PS of power with 500Nm of torque. The EQ Boost can displace an additional 22PS and 250Nm for a quick getaway. The engine also features an ‘Integrated Starter Generator’ which aids performance and improves fuel economy. All the power is sent to the 4MATIC all-wheel-drive system through a 9-speed automatic gearbox. The other engine options, including a diesel, will be introduced in the later stages. And Merc will also offer a new transfer case specially configured for superior off-road driving characteristics.

There is a whole bunch of these, including Active Distance Assist, Active Brake Assist, Active Stop-and-Go Assist, Active Steering Assist and Blind Spot Assist. All these make use of several multi-purpose camera and long-range radars which keep scanning the roads round the clock to make it ride safer.

The new-gen Mercedes-Benz GLE will dealerships in the US and Europe by early 2019 while there is no official word on the India launch yet. We expect Mercedes to bring it some time next year to our shores. When launched, it will renew its rivalry with the Audi Q7 and the BMW X5.