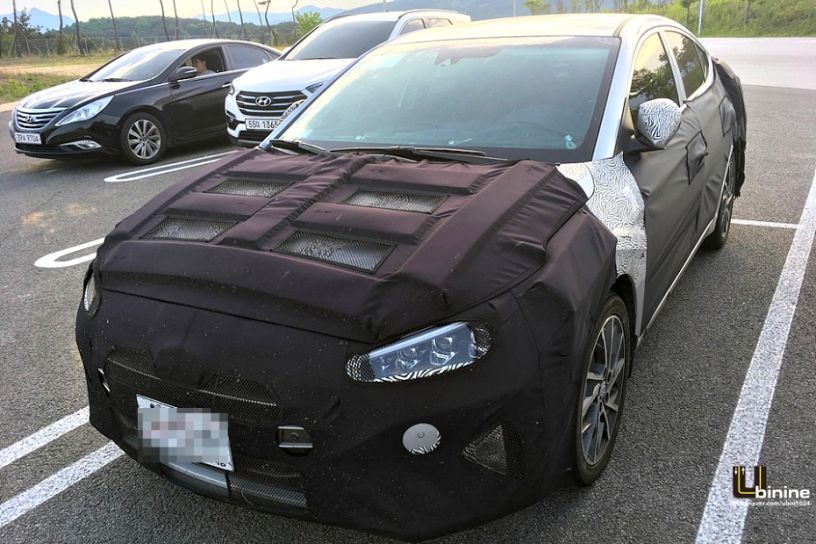 Test mules of the Hyundai Elantra facelift wearing a heavy camouflage were spotted in South Korea yet again. While the earlier shots gave us a glimpse of the revised tail lamp and rear bumper with a number plate housing, the latest spy shots reveal the sedan’s revised headlamps The pre-facelift version, which is currently on sale in India, has the number plate housing on the boot lid.

As far as the exterior upgrades are concerned, the Elantra facelift will feature an all-new headlamp with four projector units and new daytime running lamps (DRLs) instead of the single-lens projector unit and Jaguar-esque LED DRLs found in the current model. The tail lamp graphics have been revised too; it will now feature horizontal lines instead of the current hexagonal detailing.

Other changes, some of which are not visible in the images, include an updated ‘Cascading Grille’, new bumpers and a redesigned boot lid. On the inside, we expect the Elantra to remain mostly unchanged. However, Hyundai could also give it a rejig, just like it did with the Tucson facelift, which made its motor show debut on 7 June 2018 in Busan, South Korea. If it follows the Tucson’s path, expect the touchscreen on the centre console to be thrown in the bin for a contemporary free-floating unit on top of the dashboard.

The India-spec Elantra is already quite feature packed. It gets an 8-inch infotainment system with Apple CarPlay and Android Auto, a sunroof, ventilated front seats, hands-free boot release and up to six airbags. The updated sedan is expected to be even better equipped than its predecessor.

Under the bonnet, the petrol-powered variants of the Elantra are expected to carry forward the same engine that powers the current model - a 2.0-litre Nu MPI petrol engine that puts out 152PS of power and 192Nm of torque. However, Hyundai could replace the 6-speed automatic gearbox with the Hyundai-Kia CVT.

The Elantra diesel is expected to get the new 1.6-litre U3 CRDi engine that produces 136PS and 320Nm, which is 8PS and 60Nm more than the current 1.6-litre U2 diesel motor. The new engine is likely to be mated to a 7-speed dual-clutch transmission (DCT) instead of the current 6-speed auto ‘box.

For those who love to change cogs themselves, Hyundai will continue to offer both engine options with a 6-speed manual, like the current model. The Elantra facelift is set to make its international debut towards the end of the year. So, expect Hyundai India to launch the updated model on our shores in 2019.