The SUV is expected to hit the market in October 2017 with 3.0-litre petrol and diesel engines, each available in three variants 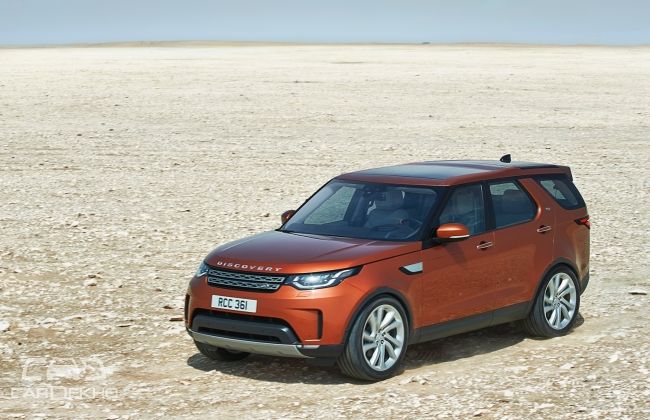 It’s been a while since Land Rover’s all-new Discovery showed up on the brand’s Indian website. Now, though, the time for speculation ends as we finally have an official confirmation that the SUV will go on sale during the festive season this year.

Revealed at the Paris Motor Show in 2016, the new Discovery gets a host of new features but the headline is its weight loss. Employing an aluminium-intensive construction, the SUV is nearly half a ton lighter than its predecessor. The new model uses a monocoque chassis and will seat 7 occupants.

Also included is the Intelligent Seat Fold technology, through which the second and third rows can be reconfigured using the infotainment touchscreen or even remotely using a smartphone, in addition to the switches on the C-pillar! Simply put, it makes the cabin more versatile and lets you adapt the seats based on how many passengers/how much and what kind of luggage you have.

The Discovery also gets a new powerplant - the 2.0-litre, 4-cylinder Ingenium diesel engine that makes 240PS and 500Nm of torque. However, at least at launch, we expect it to be offered in more powerful avatars.

The Discovery diesel and petrol are likely to use 3.0-litre, 6-cylinder engines. The TD6 diesel engine makes 258PS of power and 600Nm of torque, while the Si6 petrol engine makes 340PS and 450Nm of torque. Both engines will come paired with an 8-speed automatic gearbox.

To state the obvious, the new Discovery will offer good off-roading pedigree. Apart from a maximum ground clearance of 283mm and a water wading depth of 900mm, the new Discovery also employs Land Rover’s Terrain Response system which adapts the 4WD system through a range of drive modes.

As per our sources, the SUV will be offered in three variants – S, SE and HSE, with prices likely to start around Rs 70 lakh and going up to around Rs 90 lakh.