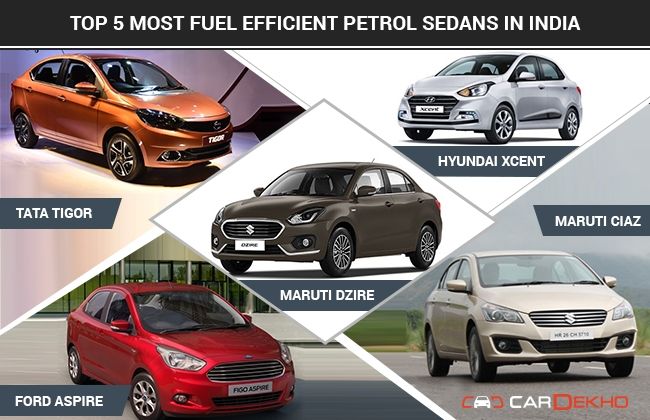 Growing inclination of buyers towards petrol cars has resulted in their sales gaining momentum. Besides the low entry-level purchase cost, it’s the narrowing fuel price gap with diesel, which can be attributed for this change in preferences. Another reason, the most critical of all, is the surge in mileage of petrol cars, which has diverted buyers towards them. Small cars are mostly available in petrol, however, it’s the compact sedan and sedan segment where the battle of engines exists.

With the all-new third-generation Maruti Dzire launched, let’s take a look at how the equations stand now in the group of the top 5 most fuel efficient petrol sedans in India.

Just making it to the group of top five fuel efficient petrol sedans, the Ford Aspire sedan secures fifth position as it returns a decent fuel efficiency of 18.16kmpl with its petrol engine. Powering the Aspire is the 1.2-litre Ti-VCT motor, which generates 88PS of max power at 6300rpm and a peak torque of 112Nm at 4000rpm. Undoubtedly one of the best looking cars in its segment, the Ford sedan is equally good from the inside as well. It gets oodles of space in the cabin, courtesy its best-in-class wheelbase of 2491mm. Apart from offering the SYNC infotainment system and programmable Ford MyKey, it also gets the segment-leading six-airbags.

Among the list of the most fuel efficient petrol sedans in the country is the latest kid from the homegrown automaker, the Tata Tigor. Under the hood is the Tiago-borrowed 1.2-litre 3-cylinder Revotron engine, which generates max power of 85PS and 114Nm of max torque. Linked to a five-speed manual gearbox, it returns an impressive mileage of 23kmpl. Launched in March this year, the Tigor irons out most difficulties faced in the compact sedans – it gets a larger boot and spacious backseat. Furthermore, the Tigor gets JBL audio system, touchscreen unit with android connectivity, smoked lens, sporty black bezel, sharp tail lamps, rear armrest with cup holders and many more.

The Hyundai Xcent received a fresh look on the 20th of last month. The compact sedan has grown both in terms of styling as well as road presence. It clings to the fourth spot in our list with a decent mileage of 20.14kmpl. The Xcent facelift extracts power from the 1.2-litre petrol engine pumping out max power of 83PS and max torque of 114Nm. It comes with an option of a five-speed manual or a four-speed automatic transmission. The update helped the Xcent shed its among-the-herd looks, and the addition of the larger cascading grille has made it noticeable on road. The highlights of the new Xcent includes a 7.0-inch infotainment system and standard dual airbags.

Maruti Suzuki’s second attempt at the sedan segment after the Baleno sedan has been quite successful with the Ciaz. It outperformed the once segment-king, Honda City, and now leads the pack. Under the hood of the Ciaz is a 1.4-litre K-series petrol engine which generates 92PS of max power and 130Nm of peak torque. Linked to a five-speed manual or a four-speed automatic transmission, the Ciaz MT returns an impressive mileage figure of 20.73kmpl. It gets ample of features such as projector headlamps, a 7-inch touchscreen infotainment system and leather seats. Its aggressive pricing is the metaphoric cherry on top.

Sitting proudly at the top spot is a compact sedan which dictates terms in its segment. With a claimed mileage of 22.0kmpl, it’s the Maruti Suzuki Dzire. The newly launched third-generation Dzire sheds the look of its predecessor and now appears fresh from all sides. There are a host of changes that the sedan gets. You can check those in our story - Maruti Dzire: Old vs New. Powering the petrol Dzire is the same 1.2-litre four-cylinder motor, which yields 83PS of max power and 113Nm of max torque. However, there’s a bump of 1.1kmpl in its mileage this time around thanks to the reduction in weight. The engine is linked to a five-speed manual or five-speed AMT gearbox. It gets a large touchscreen infotainment system with Apple CarPlay, Android Auto and Mirror Link connectivity, increased wheelbase and boot space (378 litres)! The new Dzire also gets dual-front airbags, ABS with EBD and rear child seat anchors as standard equipments.

Recommended: 5 Hatchbacks Under Rs 10 lakh That Are High On Comfort And Features