Would You Like To See The New Honda WR-V Take On The Tata Nexon In India? 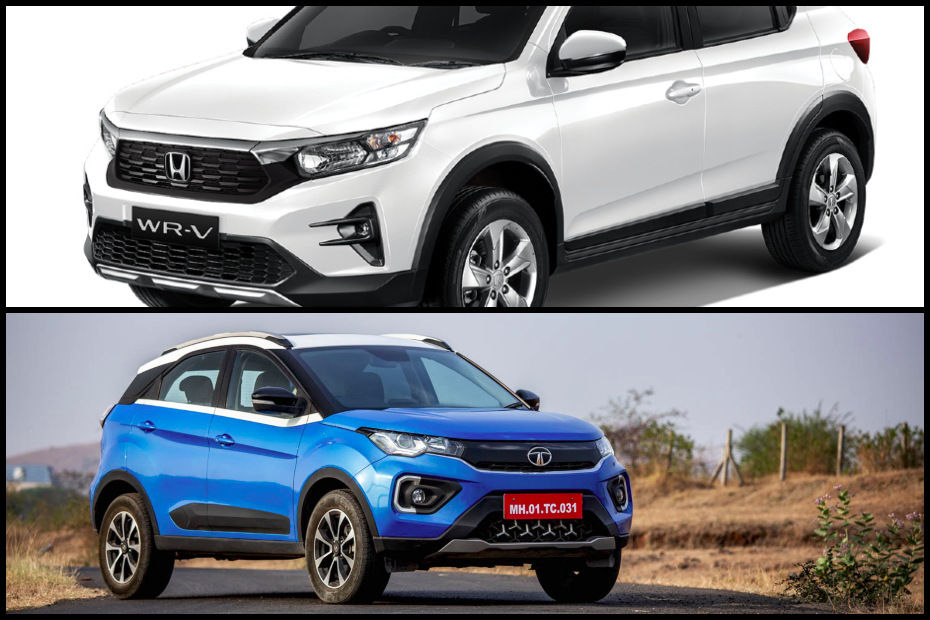 The subcompact SUV space in India is one of the most competitive with entrants from nearly every mass-market brand save one: Honda. Its closest offering is the Jazz-based WR-V crossover but it too is quite dated compared to the sub-4m SUVs available today. However, Honda recently debuted the all-new WR-V in Indonesia and with some tweaks to shave off 61mm or more, it could be the perfect candidate. Let’s see how it compares to the current segment leader, the Tata Nexon, in pictures.

While the Nexon’s front end has plenty of road presence, it’s the WR-V that looks sportier and more premium with its multi-LED headlamps, open grille and air dam design.

From the rear, the Honda offering looks far more premium with its L-shaped LED taillamps and the sporty shapes carved into the lower half. The Nexon has more stylistic elements to its rear profile but does not look as mature or elegant as a result.

In profile, the Nexon still stands out with its coupe-like roofline and multi-colour finish. It also gets typical bodyside cladding on the doors in addition to the cladding along the bottom edge. Meanwhile, the new Honda WR-V has more of a premium crossover stance but its side-cladding still lends it some rugged appeal. The larger 17-inch alloys with the black finish also add to the Honda’s visual presence.

The cabin of the WR-V is based on that of the Amaze sub-4m sedan. Its all-black finish with red accents makes it look sportier than the dashboard of the Nexon, but no more premium. In fact, the Tata SUV’s piano-black surfaces may even be preferred by some over the Honda interior.

Both SUVs get a 7-inch touchscreen infotainment display, yet the difference in positioning makes for very different experiences. The Nexon’s infotainment system does come with Android Auto and Apple CarPlay while the WR-V does not specify. Furthermore, the Honda SUV’s climate control panel gets switches over dials.

The top-spec WR-V comes with leather upholstery with red stitching, as expected from an RS-badged variant. The Nexon’s front seats do not seem to offer similar levels of padding, but are known to be fairly comfortable. Both cars get height-adjustable driver seats.

In the back, the WR-V comes with a headrest for all three occupants which is absent in the Nexon. However, multiple tests with the Tata subcompact SUV have proved to us that it has the most spacious rear seats in the segment, while the Honda is likely to focus more on a premium experience.

In its Indonesia-spec, the new Honda WR-V comes with a petrol-engine only. A 1.5-litre unit making 121PS and 145Nm. However, the Tata Nexon gets the choice of turbo-petrol, diesel and pure electric powertrains.

Honda offers the Indonesian WR-V with a CVT automatic only while the combustion-engine variants of the Nexon get the choice of a six-speed manual and AMT transmissions.

Will the New WR-V Come To India?

Honda has not confirmed nor denied the possibility of the new WR-V being brought to India. Its efforts are likely focussed on its upcoming India-centric compact SUV instead. However, based on this comparison, we feel that many buyers would like the choice of a Honda subcompact SUV as their next car. Would you also like to see Honda enter the sub-4m SUV space with the all-new WR-V? Let us know in the comments below.

One of the long pending facelift required on this car! The WRV with 1.5 CVT will sell like hotcakes if priced well.

Honda is a good car maker & wr-v suv dekhte hain may be good.

Latest Cars
Upcoming Cars
Popular Cars
HomeNew CarsNewsWould You Like To See The New Honda WR-V Take On The Tata Nexon In India?