Explore The New Honda WR-V In These 15 Pictures 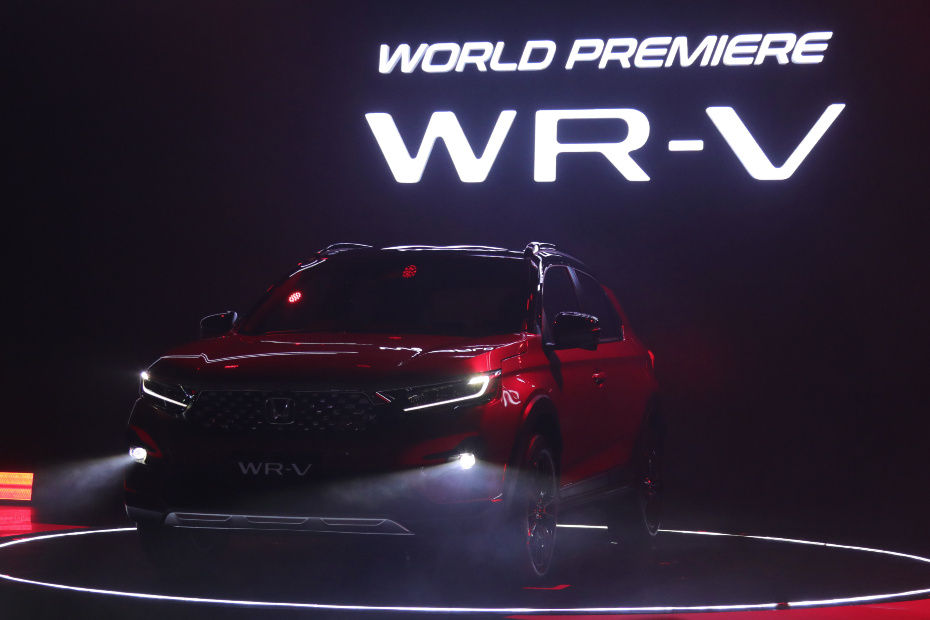 Honda has taken the covers off the new WR-V crossover SUV in Indonesia. The new WR-V looks very different from its predecessor. It now has its own visual identity, while the previous iteration looks more like a cladded and lifted version of the Jazz hatchback. Let’s take a closer look at the market-ready version of the SUV RS Concept:

The front-end of the new WR-V looks sportier and blockier with its upright nose accented by the sharp lines, especially the upper edge of the grille. The cladding around the grille gives it more definition while most of the bumper is taken up by the large air dam. It retains its SUV-ness with the visible front skid plate.

In its lower trim, the WR-V gets similar halogen headlamps to the India-spec Amaze sedan. However, the higher variants come with multi-LED headlamps with integrated DRLs and sequential turn indicators.

The top-spec RS trim of the new WR-V gets a studded pattern for the grille while the regular grille has more of a hexagonal platform.

Its LED fog lamps are housed in sporty cladding in each corner of the front bumper.

The top-spec WR-V looks fairly premium in profile and in this top trim it gets a blacked out finish for the roof and the pillars. It gets cladding all around the bottom edge this RS variant rides on dual-tone 17-inch alloy wheels. In terms of proportions, the new WR-V fails to qualify for the sub-4m segment by just over 60mm, where it would have been a great rival to the likes of the Maruti Brezza and Kia Sonet.

The rear end styling of the new WR-V is more like a typical mass-market Honda model. It has a chunky rear bumper with the lower half made up of cladding. The rake of the rear windscreen is quite sporty, accented by the roof-integrated-spoiler. Its rear skid plate evens out the sportiness with its visual ruggedness.

It gets an inverted L-shaped light signature for the LED taillamps.

The RS-trim of the new WR-V features an all-black cabin with red accents. Its dashboard layout is near-identical to that of the Amaze with the positioning of the central AC vents, the design of the central console, the steering wheel and location of the climate controls.

The WR-V is equipped with a 7-inch touchscreen infotainment system with smartphone connectivity, but does not specify Android Auto or Apple CarPlay compatibility. Its auto AC controls feature toggles instead of dials to adjust the fan speed or the temperature.

It even gets the same instrument cluster as the Amaze with analogue dials and a 4.2-inch TFT display in the middle.

The WR-V RS variant comes with black leatherette seat upholstery accented by red stitching. It also has a front centre armrest with storage underneath.

Its rear seats can be split-fold 60:40, and offer adjustable headrests for all three occupants. However, even this premium variant only gets a lap belt for the middle seat.

The all-new WR-V subcompact SUV comes with the carmaker’s suite of ADAS tech called Honda Sensing. It’s quite similar to the feature set offered on the Honda City Hybrid in India. The SUV gets four airbags as standard with the top trim fitted with six. Other notable safety and convenience features include a lane-watch camera, electronic stability control hill assist and rear parking sensors.

Honda is offering the Indonesia-spec WR-V with just one engine, the same 1.5-litre petrol unit found in the City. Its output is rated at 121PS and 145Nm.

In that market, the WR-V is only offered with the CVT automatic transmission.

Will it come to India?

Honda has not officially confirmed the new WR-V for India, but it is likely to come over with some market-specific modifications to fit the sub-4m category. If launched, it is expected to be priced from Rs 8 lakh and also offer a manual transmission option to be more affordable. However, the Japanese carmaker is likely to be more focussed on an India-centric compact SUV confirmed to launch in 2023.