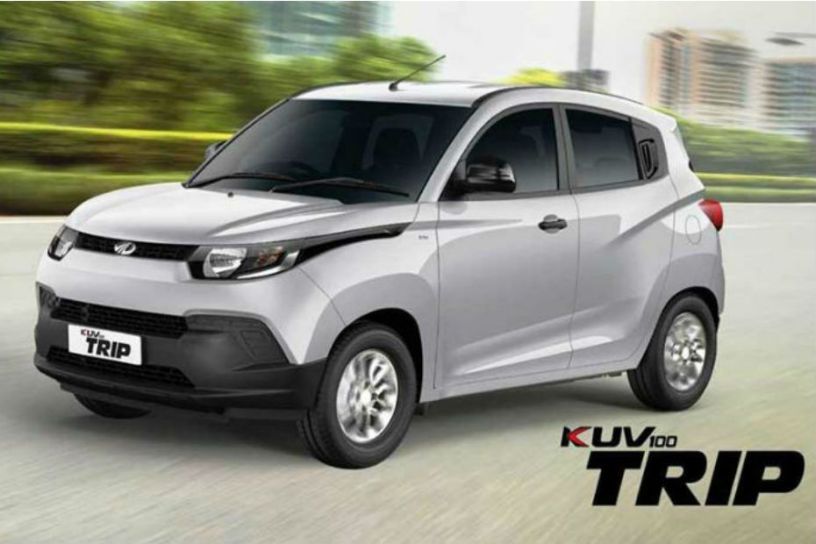 Mahindra has launched the KUV100 Trip at a starting price of Rs 5.16 lakh (ex-showroom Delhi) for the bi-fuel version (CNG and petrol) and Rs 5.42 lakh for the diesel variant. The KUV100 Trip is targeted at fleet operators and cab aggregators looking for a compact car that is not very expensive to maintain. Colour options on offer on the KUV100 Trip are Diamond White and Dazzling Silver.

The KUV100 Trip is based on the pre-facelift KUV100 and shares its equipment list with the base K2 variant of the KUV. The features on offer are a manual AC, electric power steering, and headlight adjustment. Basic safety features such as ABS with EBD, ISOFIX mounts and dual airbags are onboard; however, there’re no power windows or an audio system. Also Read: Mahindra Xylo, NuvoSport, Verito Set To Be Discontinued?

The petrol engine on offer is the same 1.2-litre, 3-cylinder unit that the KUV100 gets. It churns out 83PS of maximum power and 115Nm of peak torque. The exact output that the KUV100 Trip with CNG delivers is yet to be announced by Mahindra. The diesel option in the lineup is a 1.2-litre, 3-cylinder unit as well, capable of putting out 78PS of power and 190Nm of torque. The 5-speed manual transmission on offer remains as is on both the engines. Recommended: Ola Drivers In Nagpur Unhappy Driving Mahindra e2o EV

With the rapid rise in the number of cabs on Indian roads, more and more manufacturers are launching vehicles for this market. Maruti launched the Celerio Tour H2 this year to join the Dzire Tour while Hyundai’s Xcent Prime is already on sale in the market. Let’s see how their prices compare against the KUV100 Trip. Also Read: Maruti Suzuki Celerio Gets A Taxi Variant

The KUV100 Trip has the most affordable diesel variant, undercutting the Xcent as well as the Dzire by almost Rs 1 lakh. In addition to that it can seat a passenger more than all the choices mentioned here.

Mahindra claims a fuel efficiency of 18.15 kmpl for the standard KUV100 powered by the petrol engine and 25.32 kmpl for the diesel engine. For the KUV100 Trip, the carmaker just claims a running cost within the range of Rs 0.35-0.40 per km. The KUV100 Trip comes with an optional extended warranty package of 5 years which can be had at Rs 9,720 for both the petrol and the diesel variant.

Best experience with mahindra kuv 100 CNG trip its nice car feel with SUV. mileage where i am getting 22km/ kg and in local. so not bad choice if you are planning a car in CNG version.