Which is quicker? Manual or AMT? We tell you 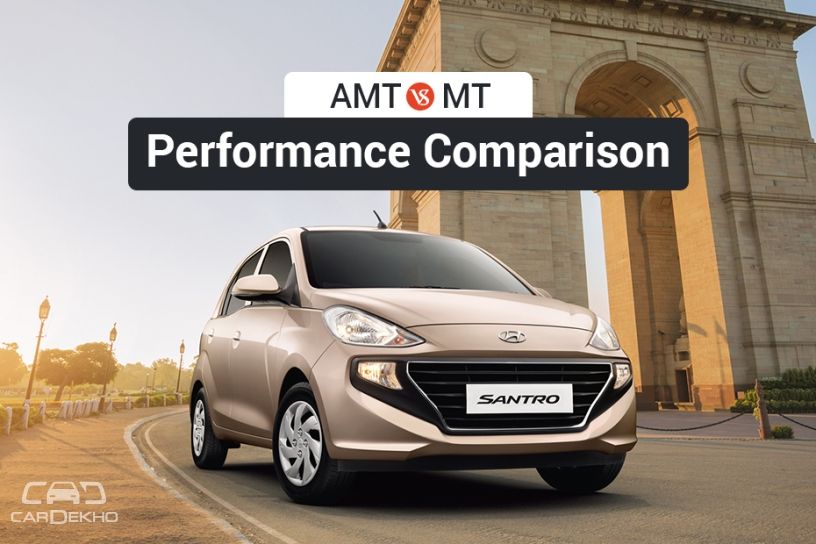 The Hyundai Santro, which was reintroduced in September 2018, is more feature rich than its predecessor which was discontinued back in 2015. As a result, it’s not an entry-level hatchback anymore. Instead, it now competes with the Tata Tiago and Datsun GO. Apart from a 5-speed manual gearbox, the new Santro is also available with an AMT (automated manual transmission). We find out how the two transmissions affect the car’s performance and fuel economy.

The manual and AMT-equipped versions of the Santro are powered by a 1.1-litre petrol engine that produces 69PS of power and 99Nm of peak torque. Let’s see which is faster and more fuel efficient of the two.

The manual Santro is 1.54 seconds quicker to reach the 100kmph mark compared to the AMT version. The story remains same in the quarter-mile drag race as well, where the MT is almost a second quicker than the AMT. The AMT is also 2.54kmph slower than the MT when it reaches the finish line.

The Santro MT leads the AMT on the fuel economy front as well, albeit marginally. It is 0.47kmpl and 0.02kmpl more frugal in the city and highway, respectively. Since the difference is marginal, there’s a possibility that it could be due to various factors like driving technique, traffic conditions, etc.

Let’s take a look at this in terms of fuel expenses. Here’s how much you’ll have to spend on if you plan to clock an average of 1000km every month based on three different driving patterns (based on real-world fuel efficiency figures listed above). The calculation has been done by considering the price of a litre of petrol at Rs 70.

From the above table, it is pretty clear the difference between the running cost of both cars is negligible (not more than Rs 120/1000km). So, it won’t make a big difference to your wallet if you buy the AMT for the sake of convenience.

Now let’s check how the two cars performed in our braking tests.

Was the Santro AMT drag race test done on a dyno or on a proper track?